Latest News & Features
Home | The Friday Five: 5 Players Who Only Appeared on Certain Teams in Games

The Friday Five: 5 Players Who Only Appeared on Certain Teams in Games

Welcome to this week’s edition of The Friday Five! The Friday Five is a feature that I post every Friday in which I give my thoughts on a topic that’s related to NBA Live, NBA 2K, and other basketball video games, as well as the real NBA, and other areas of interest to our community. The feature is presented as either a list of five items, or in the form of a Top 5 countdown. This week’s Five is a list of five players who only appeared on certain teams in video games.

I’ve mentioned that one of the fun aspects of revisiting old games for my Wayback Wednesday features is that they’re a snapshot of the NBA at the time. It’s interesting how it can jog your memory when you fire up an old title, see a familiar name, and think “Oh, I forgot he played for them!” For me it happens with a lot of journeyman who I recall from the 90s and early 2000s, and even a couple of stars who had brief stints with unusual teams at the end of their careers. With the way that some players change teams, it can be difficult to immediately find them in older titles.

Of course, the snapshot that games can provide of the NBA of yesteryear isn’t always completely accurate. Older titles had roster cut-off dates and no official updates, so players would end up on teams they were cut or traded from by the time a title was released. Other players might indeed spend time on a team’s roster during the season, but never actually play a single game for them due to injury or other factors, thus only appearing for them on the virtual hardwood. As with the players who have appeared in more video games than NBA games, I find it to be an interesting trivia note. Let’s look at five players whose stints with teams only came on the virtual hardwood! 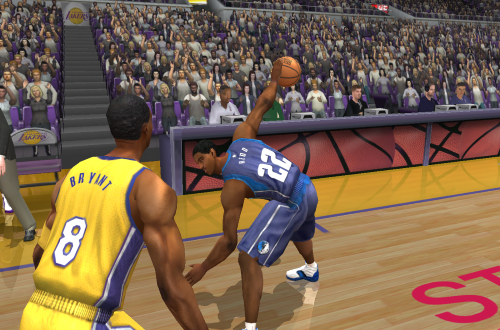 I’m starting out with the example that was the original inspiration for this topic. At the time I couldn’t find enough examples, but it was too interesting of a scenario not to talk about, so I ended up discussing it for Wayback Wednesday. Anyway, the brief version of the story is that during the 2002 offseason, restricted free agent Michael Redd signed an offer sheet with the Dallas Mavericks. At the time, teams had fifteen days to match an offer, and the Milwaukee Bucks – who also had Ray Allen on their roster back then – milked that window for all it was worth. The Bucks did eventually match the offer sheet, keeping their promising young sharpshooter after all.

In the meantime, the PC version of NBA Live 2003 was being finalised ahead of its November 14th release. The game had a roster cut-off date of October 1st; the day Redd had signed his offer sheet with the Mavericks. Faced with the prospect of being wrong no matter which way they went, the developers gambled on the Bucks refusing to match (which did seem like a possibility). As such, Redd is on the Mavericks in the default rosters of NBA Live 2003 PC, despite never playing for them. Incidentally, he’s absent from the PlayStation 2 version, and is still on the Bucks in NBA 2K3. It certainly was a unique scenario, both in video games and NBA free agency. 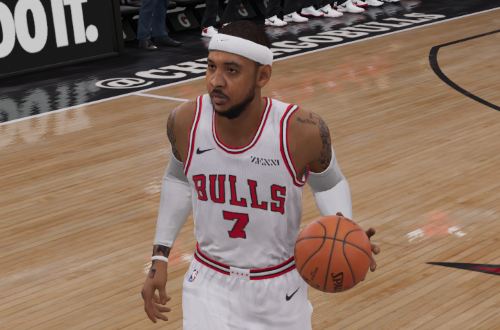 Let’s jump ahead to a more recent example. New Trail Blazer Carmelo Anthony was unsigned as the 2020 season began, which had stirred up some controversy and led to allegations of him being blackballed. Whether or not you believe that, the last few years have been a fall from grace for a player who was, for a long time, one of the league’s biggest stars. After playing a season alongside Russell Westbrook and Paul George in Oklahoma City, he was traded by the Thunder to the Atlanta Hawks. The Hawks waived him shortly after, so that he could join James Harden and Chris Paul on the Houston Rockets. On paper, and in video games, they were quite a trio.

Reality wasn’t as kind, however. Melo’s career-long games started streak came to an end as he came off the bench in eight of the ten games he played for the Rockets. He was soon on an indefinite leave of absence after they decided to part ways with him, and in January, he was traded to the Chicago Bulls; a team that had courted him in 2014 before he ultimately re-signed with the New York Knicks. He would be waived by the Bulls on February 1st without ever playing for them, but before that happened, roster updates for NBA Live 19 and NBA 2K19 placed him in Chicago as he was officially on the roster. Saved rosters from that time reflect that brief Chi-Town stint. 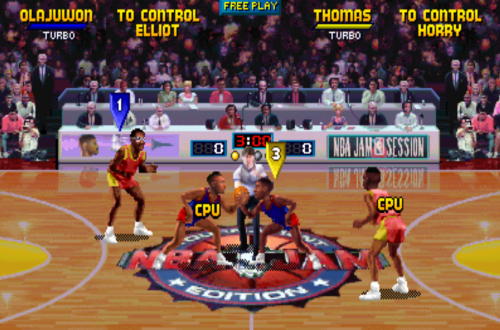 Here’s a rare double example, and from the early days of basketball gaming as well. Official roster updates simply weren’t a thing back then, though a second pressing of games (or later releases in other regions) could result in changes being made and bugs being fixed. Arcade games also received revisions, and as such, there’s more than one version of NBA Jam and its sequel NBA Jam Tournament Edition. In at least one revision of NBA Jam TE arcade, Sean Elliott is on the Houston Rockets, while Robert Horry can be found on the Detroit Pistons. This will come as a surprise to anyone familiar with their careers, as these players have seemingly switched teams in error.

Despite appearing to be a mistake as they have each other’s portraits (though they do have the correct faces) and Horry wears a Rockets jersey for the Pistons while Elliott wears a Pistons jersey for the Rockets, they were meant to be swapped. In February 1994, the two players were traded for one another in a deal that fell through after Elliott failed a physical. The trade had already been agreed to and reported though, and so it made its way into a revision of NBA Jam Tournament Edition, albeit not entirely accurately due to the aforementioned errors. The fact that they were on those teams wasn’t an error itself however, at least when the new revision was created.

Beyond the unusual scenario it created in NBA Jam TE, the failed trade of Horry and Elliott is an interesting “What If” to look back on. Upon returning to the Rockets, Horry became a key player in their back-to-back championships in 1994 and 1995, was traded for Charles Barkley, and ended up winning seven championships with three different teams. Having originally traded him for Dennis Rodman, the San Antonio Spurs reacquired Elliott in 1994. He won a title with them in 1999, and in 2000 became the first player to return to the NBA after a kidney transplant. Neither he nor Horry played for the teams they were on in that revision of NBA Jam TE, though. 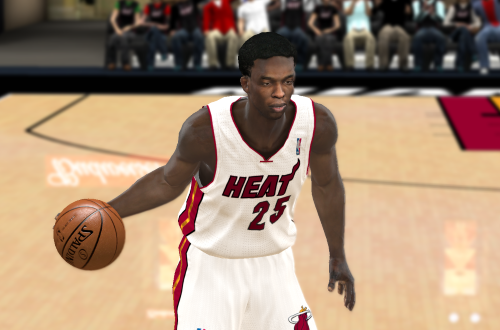 After debuting with Houston in the 2013 season, Patrick Beverley established himself as the starting point guard in his second year with the Rockets. It’s a role that he kept when he was traded to the Los Angeles Clippers for Chris Paul prior to the 2017 season, and he’s carved out a reputation as one of the league’s peskiest defenders. As a member of the Clippers, he’s become a part of the team’s rivalry with the far more decorated Los Angeles Lakers; a rivalry that has been reinvigorated by the arrivals of LeBron James and Anthony Davis. Funnily enough, while their current teams make them bitter foes, Beverley and LeBron could have been teammates many years ago.

Although Beverley didn’t make his NBA debut until the 2013 season, he was drafted by the Lakers in 2009, with his rights being traded to the Miami Heat a day later. He played a year in Greece before making the jump to the NBA, signing with the Heat in August of 2010; the same year LeBron took his talents to South Beach. Beverley was cut just before the season began, but is a member of the Heat in the default rosters of NBA 2K11 (official roster updates would release him into the Free Agents). This cameo on a team he never played for also makes him part of a group of players who debuted in NBA video games before the real NBA, but that’s a topic for another time.

There will be a follow-up Five on this topic, as I do have another five examples to share. Can you guess who they might be, or perhaps name an example that I haven’t prepared? Do you remember the scenarios I’ve described here? Let me know in the comments section below, and as always, feel free to take the discussion to the NLSC Forum! That’s all for this week, so thanks for checking in, have a great weekend, and please join me again next Friday for another Five.

Cameron Bairstow (ex-Chicago, added to Detroit in the latest roster update of Live 16). I was excited getting an update, cause I’ve mostly played Live 16 only these days. 🙂
P.S. Interesting article topic too!

That’s one I hadn’t thought of, good looking out! And glad you enjoyed the topic. 🙂

I find the Sean Elliott one the most amusing. As it is, he spent a very strange season with the Pistons, only to be back with the Spurs soon after.

The 1994 season is an interesting one to look back on in general, coming right after MJ’s abrupt retirement. Funny that it ended up having an impact on NBA Jam TE like that, too.