Welcome to this week’s edition of The Friday Five! The Friday Five is a feature that I post every Friday in which I give my thoughts on a topic that’s related to NBA Live, NBA 2K, and other basketball video games, as well as the real NBA, and other areas of interest to our community. The feature is presented as either a list of five items, or in the form of a Top 5 countdown. This week’s Five is a list of five options found in basketball games that are rather (or indeed, completely) pointless.

With that being said, there have been options and tasks in basketball video games that have felt pointless. In the best case scenario they can just be ignored, but they can still be annoying, if only because you can’t help but feel that they could (and should) be more useful. They leave you wondering why the developers bothered to have those options in the first place, or why something wasn’t done more efficiently. Others may simply be left over from previous games where they had more of a purpose, and some benefit the publishers more than gamers. Whatever the case may be, some options are quite pointless, and these are five that come to mind. 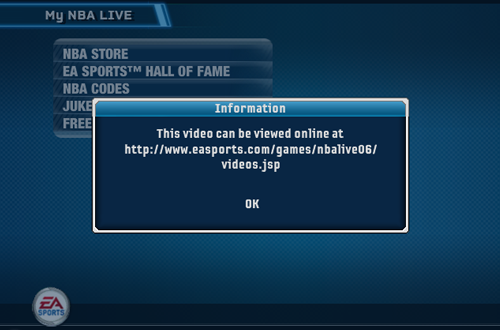 Let’s begin with one of the most pointless options we’ve seen in basketball games: menu items that appear to be offering up tutorials and other such resources, but only provide a link to where the content can be viewed online. Note that it wasn’t possible to browse to those links and retrieve the content from within the game; the titles that did this didn’t feature that kind of online connectivity. It was useful in that it pointed you in the right direction and the resources in question could indeed be helpful, but it was somewhat misleading. Furthermore, those resources tended to go missing when official sites were revamped for the next release, making the links obsolete.

Fortunately, this doesn’t really happen anymore. Now that games don’t have to fit onto a CD-ROM or DVD-ROM with their smaller storage capacities, onboarding content such as 2KU in NBA 2K and NBA Live’s Drills is readily available in-game. Video tutorials remain accessible on official YouTube channels if not official websites, and there’s no shortage of community-created content being made to back it up. I’ll also mention bonus content such as trailers and highlight videos here, which have become outmoded features. These days, the space required for that stuff is better put to use for anything that enhances the graphics, presentation, and overall gameplay experience. 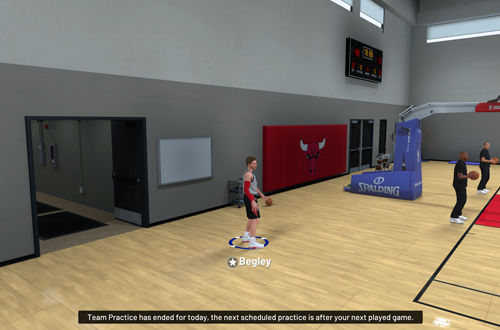 Speaking of pointless navigation options, pressing the pause button when you’re in the team facility no longer ends the practice session during the free shootaround, as it did in NBA 2K17. The only way that you can exit a practice session is to walk over to the door if you want to go to The Neighborhood, or bring up the menu if you want to play the next game or exit the mode entirely. Granted, pressing the pause button directs you to walk out the door to exit practice, which I suppose helps any gamers who don’t know what to do. I still find it to be rather pointless since it could quite easily be a shortcut, rather than having to run all the way over to the door when you’re finished.

As I mentioned, that’s how it worked in NBA 2K17. To be honest, it was still a little annoying having to watch the cutscene of your player walking to the tunnel over and over again, but at least it took you back to your MyCOURT and its streamlined hub. All in all, it felt far less repetitive than running around The Neighborhood, which is something I’ll tolerate as long as I’m interested in MyCAREER, but an approach that I still don’t like. The redesign in NBA 2K19 has made it slightly more bearable, but there’d be far less pointless messing around if we had more shortcut options, whether it’s exiting practice, or loading straight into MyCOURT or the Pro-Am modes. 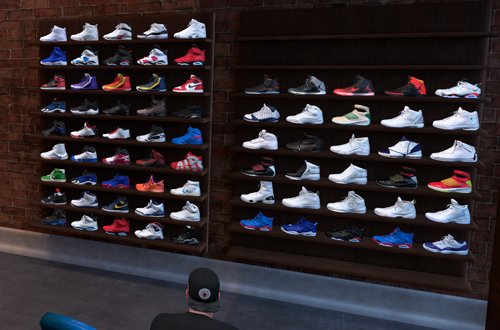 One of the big decisions that we all make early on in MyCAREER is which shoe brand we want to sign with. The endorsement deal is a means of earning additional VC through in-game incentives and attending events for the brand, with earnings increasing as we gain more fans (and thus leverage through marketability). One of the conditions of signing with a brand is, understandably, agreeing to only wear that brand’s shoes for all MyCAREER games. That also includes the connected modes of The Playgrounds and 2K Pro-Am/Jordan Rec Center; not just NBA games. If you don’t honour this part of the agreement, your chosen brand will void your contract.

It’s a logical restriction as far as role-playing is concerned, as it makes your choice of brand actually mean something. You need to choose the brand you want to wear in every game within MyCAREER carefully. The issue here is that you can still buy any other brand of shoes from Foot Locker, not to mention win them on the Daily Spin. Owning those shoes is pointless however because you can never actually wear them, otherwise you’ll void the contract and lose out on VC. Since the options that we’re presented with don’t include foregoing a shoe deal altogether, the only way to wear any brand without upsetting anyone is to get an endorsement and then sabotage it. 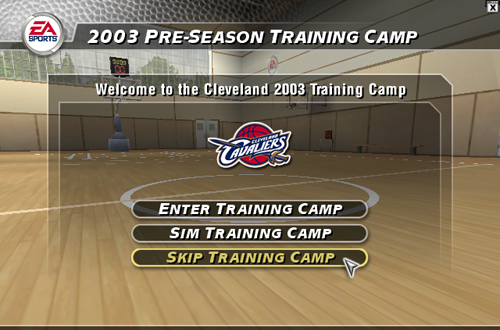 When Franchise was revamped into Dynasty in NBA Live 2004, it brought some much-needed depth to the series’ multi-season/GM mode. One of the key additions was training camp, which allowed for additional ratings boosts on top of players developing between seasons. Holding training camp was the only offseason task that was available upon starting a new Dynasty game – there were no options to redo the Draft or any of the trades that had been made in real life – but it was still a welcome addition. It allowed for a head start on development if we manually set the training parameters, or even if we just simmed it. Alternatively, we could skip it altogether.

Having those first two options makes sense, but the ability to skip training camp did feel rather pointless. There’s no good reason for a team to do that, and it ensured that your players would miss out on a chance at those additional ratings boosts. However, it was actually something to consider in NBA Live 2004, as a bug caused ratings to decline if less than 25% training time was assigned to any given area. I’m guessing the developers were aware of the problem, and added the option to skip training camp so that we could work around it. The bug was fixed in subsequent games but oddly, the option remained. Unless you were trying to get fired, it was pointless at that juncture. 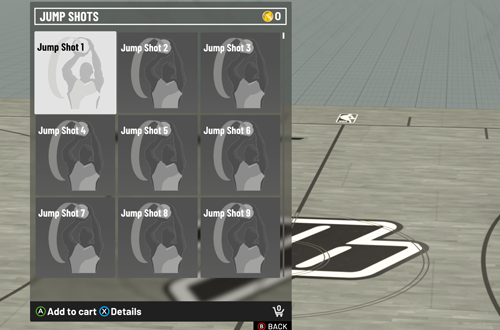 Don’t get me wrong. The fact that there are a lot of free animations in NBA 2K19’s MyCAREER is fantastic, and a welcome change of direction after the gouging that took place in NBA 2K18’s mode. It’s something that 2K should absolutely continue to do in order to offset the expense of attribute upgrades, signature animations, clothing items, and so on. However, given that they are freely available as soon as you begin MyCAREER, it feels rather pointless to have to go to the MyPLAYER store and add them all to your cart so that you can purchase them for 0 VC. The 100 item limit for your cart makes this repetitive task even more arduous.

Then again, I suppose there is a point to it all; a method to the madness. It’s a way of encouraging us to enter the store and buy items, in the hopes that we’ll continue to do so (and in the process, end up spending money on extra VC). It’s yet another way that the game has gone from subtly nodding towards VC purchases, to a gentle nudge in their direction, to a pushing hand planted firmly in the small of the back. It would be a lot easier if all the free animations were already available in our inventory, but then we wouldn’t be guided towards the store. It makes sense from 2K’s perspective, but for us, it’s one of the more pointless options as it could be made far more efficient. 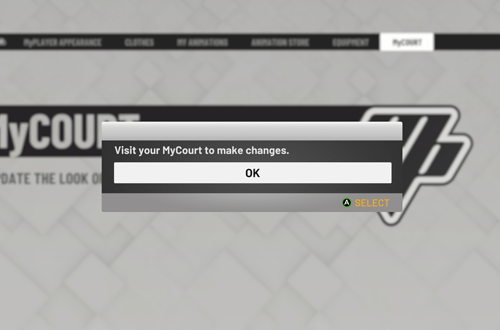 I originally included this one among the five, but since it’s more of a design flaw and the options do work, I took it out. However, I’m not sure when else I’ll get a chance to talk about this, and the mix-up does lead to a certain amount of pointlessness in some situations, so here goes. The option to edit your MyCOURT design is always present in the MyPLAYER menu, but can only be accessed while you’re in your MyCOURT. If you try to access it while out in The Neighborhood, you’ll just be prompted to go to your MyCOURT in order to make changes. This does make sense from a technical standpoint, but it’s pointless to have the option show up where it can’t be used.

It makes even less sense when you consider that the menus for both purchasing and assigning animations are not available when you’re in MyCOURT. Not only does this mean that it would’ve been possible to hide the MyCOURT option based on your current location, but you can’t get new animations and test them out in the one area where that would be useful, without going outside first. And then, when you do go outside, the menu still displays an option for settings that you can’t access until you go back in! In this case, the options aren’t useless or pointless in and of themselves, but issues with the interface hinder them and make them feel that way.

Can you think of any other options in basketball games that feel pointless? Let me know in the comments section below, and as always, feel free to take the discussion to the NLSC Forum! That’s all for this week, so thanks for checking in, have a great weekend, and please join me again next Friday for another Five.