Welcome to this week’s edition of The Friday Five! The Friday Five is a feature that I post every Friday in which I give my thoughts on a topic that’s related to NBA Live, NBA 2K, and other basketball video games, as well as the real NBA, and other areas of interest to our community. The feature is presented as either a list of five items, or in the form of a Top 5 countdown. This week’s Five is a list of five reasons why it’s a good idea to keep your saved game files for basketball video games.

Another preview season is over, which means that NBA Live 19 and NBA 2K19 are upon us! If you’re picking up this year’s games, be sure to share your impressions with the rest of the community in the Forum, and stay tuned for the original content that we’ll be producing for them. Hopefully this year’s releases will meet most of your expectations (if not all of them), and it won’t be long before you’re starting new games and getting stuck into your favourite modes. Once that happens, you might be tempted to delete your saved game files from last year, as well as saves from other older titles.

Not so fast! While you may be about to move on to a new basketball video game, you shouldn’t be too hasty to delete your old saved game files. We’re well beyond the days of 8 megabyte memory cards and other storage devices with very limited capacity, so it shouldn’t be an issue to hang onto your saves. You should have the room to keep files for several games in your collection, not just last year’s release. It’s a good idea to do just that, as losing your old saves is something that you can easily come to regret. To that end, here are five reasons to consider keeping your saved game files, even as you move on to the latest releases from EA Sports and Visual Concepts.

1. A Record of Your Accomplishments 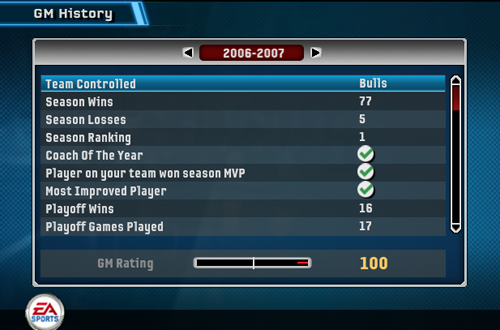 Let’s be honest with ourselves. Our greatest achievements in video games are really only important in terms of our own sense of accomplishment. There are world records for video games of course, but while they are impressive in their own right, if we’re still being brutally honest about the situation, they rank below several other notable accomplishments in the annals of history. Having put the situation in perspective, let’s also acknowledge that there’s nothing wrong with enjoying video games to the fullest. Be it 100% completion, a speed run, a high score or record time, or whatever, we can still take pride and satisfaction in what we achieve in video games of all genres.

We put a lot of time into basketball video games! Whether it’s playing a number of seasons in a franchise mode, grinding our way to a superstar player in the career modes, assembling a stacked team in the card collecting modes, or anything else on the virtual hardwood, it all represents time, effort, and achievement. It can be tough enough starting over year after year, without throwing away all evidence of what we’ve accomplished in previous games. Online content becomes inaccessible when the servers are shut down, so you might want to take screenshots there, but keep those offline saved game files. You never know when you might want to reminisce! 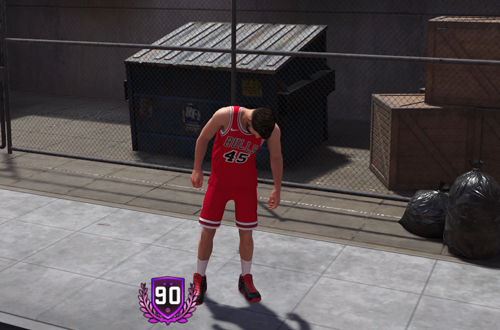 More and more gamers are becoming content creators these days. Not everyone can make it big, but it’s an enjoyable pastime that extends the gaming experience, so it’s something you may feel compelled to try. If you do, you’re going to need media and information to work with; screenshots, videos, records and information about the topic at hand. Maybe you had the foresight to keep notes and capture video and screenshots while you were playing those previous games. Even if you did however, it’s tough to account for absolutely everything. You may need to go back to a game to get the footage or screenshots that you need for the content that you’re creating.

That’s where keeping your saved game files comes in handy. You may want to show something that gamers will encounter deep into the game, or in a specific scenario. If you already have a suitable file on hand, you can save a lot of time by not having to play through the game again, which may be a very lengthy process. If you’re making any kind of content that references an older game, whether it’s a retrospective or just comparing and contrasting with the latest release, make sure that you hold onto your old saves. You never know when you’ll want to refer back to that data or capture some media, at which point you will find them to be extremely convenient and useful.

3. Desire to Return to a Previous Game 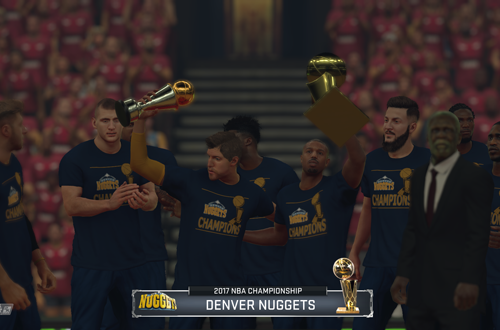 In a perfect world, every new version of NBA Live and NBA 2K would be better than the last in every way imaginable. Video game development would be a very simple process, nothing would ever go wrong, and we’d never want to stick with (or return to) a previous instalment. Unfortunately, we don’t live in that reality. While basketball video games do tend to improve throughout the years, certain titles make missteps and leave us feeling disappointed. Whenever the latest title in a series isn’t doing it for us, a lot of basketball gamers will opt to return to the previous year’s release, or another older game that they still enjoy.

Should you find yourself returning to a previous game because the latest one isn’t to your liking, you’ll no doubt want to continue where you left off. You obviously can’t do that if you immediately discard any saved game files the moment that you get your hands on a new title. For the same reason, I’d suggest not being too quick to trade in a basketball game that you really enjoyed in order to buy the latest one (especially if keeping it is financially viable and feasible in terms of physical storage space). Of course, you can usually pick up another copy of said game without too much fuss. Retrieving a saved game file that’s been wiped is another matter altogether.

4. Dusting Off an Old Favourite 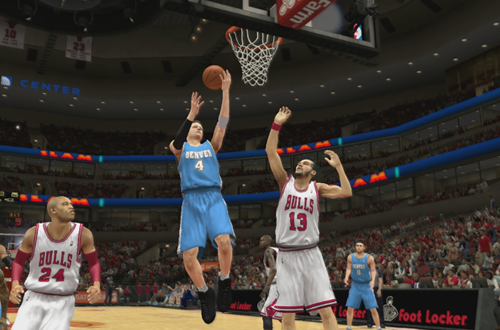 Unless you trade in or sell all of your games once you’re finished with them, you probably have a collection of old favourites. Not everyone indulges in nostalgia and retro gaming, but it’s hardly an uncommon practice, either. As noted above, if you are creating content for the basketball gaming community, it’s useful to have older games on hand for throwback and comparative features. Even if you’re not a content creator, you might just enjoy dusting off old favourites to relive fond memories. Personally, I fall into both camps, so I enjoy maintaining a collection of basketball video games that I can fire up at my leisure.

Even if you’re not returning to an old favourite on a permanent or regular basis (as in the aforementioned scenario of disliking the current release), the experience will be a lot more enjoyable if you have a saved game to load up again. You may want to play a couple more games, or even finish a season that you were so close to completing when you moved on to the next game. You may just want to look over results and all of your achievements. Maybe the game will find its way back into regular rotation, at least for a little while. Those old saved game files make retro gaming a lot more fun, so even if you think you may be done with them, hang onto them just in case. 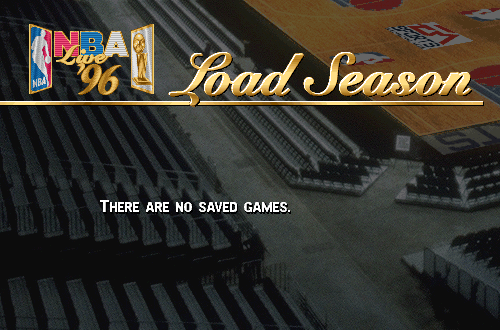 This is becoming less of an issue with cloud storage and big external hard drives for backing up our files, but those solutions aren’t infallible. Technical faults can occur for pretty much any storage device. It’s also easy enough to neglect to make regular backups, or indeed, any backups at all. If we are talking about an older game, cloud storage may not be an option. Whatever the case may be, it’s not unfeasible that you delete old saved game files without making any backups, only to later decide that you wanted to keep them after all. If there’s no local backup, no cloud backup, and no way to undelete those files, that’s it. They’re gone.

Once again, keeping everything in perspective, this is not the end of the world. If the worst thing that happens to you on any given day is that you lose your saved data for a video game, there are a lot of people who have it much worse than you do. It’s still a disappointing turn of events of course, with all that time and effort you spent gone with the press of a Delete button. You don’t have that record of your accomplishments to look back at. You won’t be able to indulge your nostalgia and pick up where you left off when you fire up a game once more. If you’re a content creator, you may have some work to do. Keep that in mind before you wave goodbye to your saves forever.

Do you keep your old saved game files just in case, or do you trade in games and delete your saves once you pick up the latest title? Have you ever deleted a saved game file and regretted it? Share your stories in the comments section below, and as always, feel free to take the discussion to the NLSC Forum! That’s all for this week, so thanks for checking in, have a great weekend, and please join me again next Friday for another Five.

Thankfully Microsoft, Xbox Live holds my Live saves since 2013. While the #4 point is strong, I have been barely inclined to boot up old Lives again due the wold in LUT and Live events / Pro-AM in the 14–15–16. Seeing at the barebones of Live 19’s “Franchise” Mode, I may return to my Live 16 Dynasty save with some 90+ players onboarded on my team, although)

For sure, if you’ve mostly been playing LUT and other connected modes, it’s a bit different. It’s the offline stuff you should hang onto, just in case.

On the #5 reason, I’ve been trough very decent enough in Assassin’s Creed (I) on Xbox One, Xbox Live keeps my 360 saves, but one day I’ve faced an error like “Your save file is corrupted and cannnot be read” 🙁 It’s pity, given the fact that there is a room just for one save in that game. There was maybe 2 years ago, and since that I cannot let myself to grid again in this game from the scratch(

Ugh, that’s tough! I don’t know what’s worse, accidentally deleting a save, or having it corrupted due to a bug and the like. I guess with a bug, at least you can blame the game and the developers instead of your own mistake. 🙂

This has become a rule for my life in general: don’t trade in old games, don’t delete old saves, don’t delete music I’ve created, etc. – it always comes back to haunt me.

A good policy! I definitely regret deleting old saves and trading in games. In some cases I’ve picked up the games again, but like I said, nothing I can do about the saves!