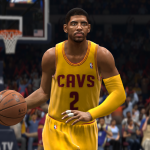 Welcome to another edition of The Friday Five! Every Friday I cover a topic related to basketball gaming, either as a list of five items, or a Top 5 countdown. The topics for these lists and countdowns include everything from fun facts and recollections to commentary and critique. This week’s Five examines the five main reasons that NBA Live flopped on the PS4/X1, aka the eighth generation consoles.

Unlike certain content creators and other haters in the basketball gaming community, I don’t delight at NBA Live’s shortcomings, or gleefully dance on its grave. While NBA 2K has provided many of us with hours upon hours of entertainment on the virtual hardwood and blacktop, we’ve also seen the drawbacks that come with a lack of competition in the genre. If you’re a fan of football games – NFL, that is – you’ve known the pain of not having alternatives even longer than basketball gamers. Even if the lone game is satisfactory, the lack of choice still stings.

Of course, it’s not quite the same situation. Madden’s monopoly comes from EA Sports having the clout and money to secure an exclusive contract when the NFL were offering it. NBA 2K’s monopoly, meanwhile, has been solidified by EA’s inability to produce a viable alternative. We’re more than a decade removed from NBA Live being the top-selling basketball game, and longer still from when it was easily the gold standard in the genre. Its attempts to rebuild during the PS4/X1 generation were largely disappointing, and have left the series in a tenuous position. These five factors are the chief reasons that those NBA Live games flopped. 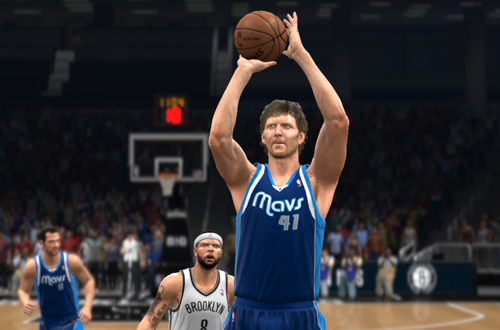 I’ll be the first person to argue that outdated graphics aren’t a deal-breaker, especially if the gameplay is enjoyable. After all, I still enjoy playing Fallout 3 and New Vegas to this day, and I’m not bothered by their aesthetics. However, it would be myopic to say that visual quality doesn’t matter at all. In particular, when your competitor has made a huge leap in its Next Gen launch, your game can’t afford to look Last Gen. That was a major issue for NBA Live on PS4/X1. Our first glimpse at NBA Live 14 was actually quite promising, even if it was a CGI trailer. It was blown away by NBA 2K14’s OMG Trailer though, and subsequent games still seemed a generation behind.

They didn’t just seem outdated in terms of player and environmental details, though. Again, we could’ve perhaps overlooked that to some extent. There was no getting past the stiff, clunky animations that were decidedly Last Gen. They didn’t look good, and the game didn’t feel good on the sticks. NBA Live 14 would’ve been a mediocre at best release on PlayStation 3 and Xbox 360, so it in no way passed muster as a launch title for PlayStation 4 and Xbox One. Improvements would be made in NBA Live 15 onwards, but those games still looked and felt outdated compared to their NBA 2K counterparts. That’s not to say they couldn’t be fun, but they fell short of expectations. 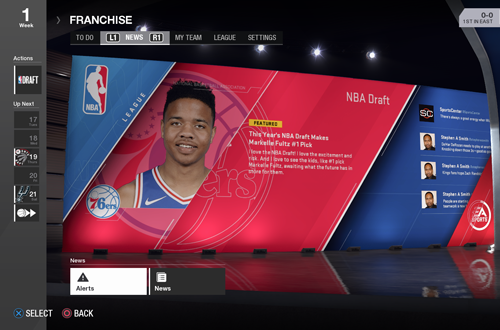 The moment I read that a “streamlined” Franchise mode would be in NBA Live 18, my heart sank. By “streamlined”, I immediately assumed it meant “crap”, and it did. Preview seasons for basketball video games are fraught with buzzwords, euphemisms, and euphemistic buzzwords. The appropriate Simpsons reference to make at this time would be Lionel Hutz’s classic explanation of the truth, and the truth. On the surface, a “streamlined” approach might’ve seemed like good news. Some of NBA 2K’s modes – notably MyCAREER, with the introduction of The Neighborhood and then The City – are padded out with time-wasting aspects that don’t appeal to all basketball gamers.

Therefore, taking a more traditional approach to modes, and avoiding any fluff in the process, could potentially provide an appealing alternative. Unfortunately, in the case of the modes in NBA Live during the PS4/X1 generation – from Dynasty/Franchise to Rising Star/The One to Ultimate Team – “streamlined” meant “barebones”. Yes, a deep mode still needs enjoyable gameplay to matter and encourage us to play it, but shallow modes fail to hold our interest. At the bare minimum, the modes in NBA Live on PS4/X1 needed to be as comprehensive as they’d been on PS3/360. They weren’t even that, and unlike NBA 2K, they didn’t significantly improve over the years. 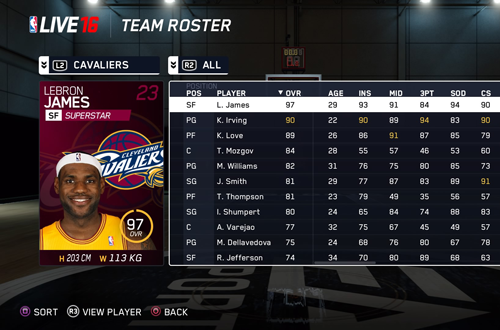 Look, I want to give credit where it’s due. Adding roster editing in NBA Live 18 post-release in a patch was a big deal, and certainly appreciated. At the same time, it would be remiss of me not to point out that such a staple feature should’ve been in NBA Live from its arrival on PS4/X1. I should also point out that although roster editing was in NBA Live 19 by default, for some reason the trade players function was removed, so the only way to move players around was to release, sign, and assign them, one by one. While atmosphere settings were thankfully retained, a standalone Playoffs mode was not. In short, features found in NBA Live 95 were not included in NBA Live 19.

Once again, this amounts to a “streamlined” approach in the worst possible way. The basics of an NBA sim are there – mostly – but there’s no depth. We didn’t get sliders back until NBA Live 16. Again, it was good to see that, and I was grateful that the developers had taken feedback on board and managed to implement them. Still, it hurt NBA Live to launch on PS4/X1 without established staples, and in some cases, not get them back. Along with sluggish improvement to the gameplay and questionable design choices, it didn’t inspire confidence within an increasingly frustrated fanbase. With NBA 2K getting deeper and deeper, NBA Live couldn’t afford to be basic.

4. Lack of Focus on the NBA 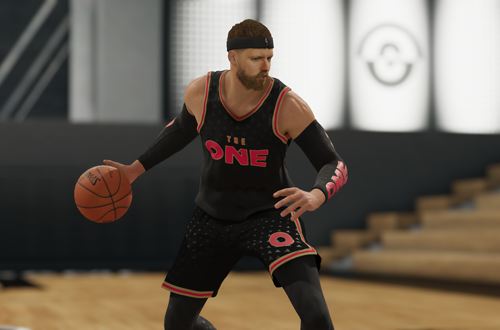 I have a question for the NBA Live Community Manager who blacklisted the old guard without the courtesy of even speaking to us: just how well did that work out for NBA Live 19? Yes, I am still bitter about that. I also feel vindicated however, as the results speak for themselves. Instead of listening to people who had their finger on the pulse of the community, knew what gamers wanted, and remembered what NBA Live was like at its peak, a Ronnie 2K wannabe declared that loyal fans (myself included) were out, and he was bringing in his own voices from the community. To quote the immortal words of that great poet of our time: congratulations, you played yourself.

We told you that realistic strategy and performance, on top of good mechanics, was paramount for gameplay. You didn’t listen. We told you that franchise mode needed to be deep – deeper than it had been on previous generations – and that roster editing was necessary. You didn’t want to hear it. Let’s face it; you felt that the easiest way of making those complaints disappear was to give the loyal gamers who were expressing them the cold shoulder, take away their access, and line up your own contingent of content creators who promoted for clout. Focusing on The Streets, clothing items, and anything but the NBA, made NBA Live 19 a flop. Again, DJ Khaled said it best.

5. No Margin For Error 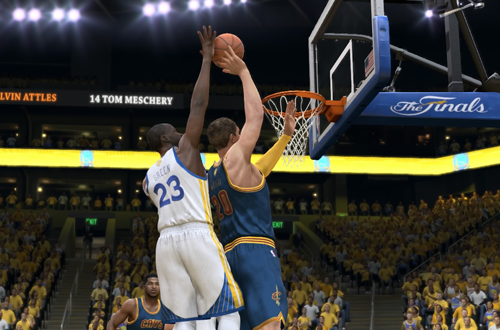 When it comes down to it, NBA Live simply had no margin for error on the PS4/X1 generation. The series had already faltered on the previous generation, leaving long-time NBA Live fans – again, very loyal fans – increasingly frustrated, and looking to NBA 2K for their virtual basketball fix. NBA Elite 11 was a disaster, NBA Live 13 was cancelled after promises of correcting course and coming back stronger than ever, and when the series finally relaunched on PS4/X1, it was subpar and overshadowed by NBA 2K in every way. Basketball gamers were willing to make allowances, and understood that it wouldn’t immediately be on NBA 2K’s level. “Good” would be fine.

What wouldn’t be and wasn’t fine, were outdated tech and bad design choices. It was one thing to be second place to NBA 2K, another thing altogether to be less fun and shallower than games that came out a decade earlier. It needed to impress, to at the very least have features and gameplay that evoked fond memories of, and positive comparisons to, previous high points in the series. After so many blunders, gamers were only going to be so patient and forgiving; even the most ardent supporters, who were now enjoying NBA 2K a lot more. To be fair, the developers knew that, and they tried their best. Sadly, past follies and setbacks gave them no margin for error.

Did you play any of the NBA Live games on P4/X1? What were your impressions of the best and worst of them? Would you still like to see the series return, and do you believe that it can? Have your say in the comments, and as always, feel free to take the discussion to the NLSC Forum! That’s all for this week, so thanks for checking in, have a great weekend, and please join me again next Friday for another Five.