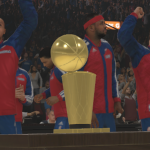 Welcome to another edition of The Friday Five! Every Friday I cover a topic related to basketball gaming, either as a list of five items, or a Top 5 countdown. The topics for these lists and countdowns include everything from fun facts and recollections to commentary and critique. This week’s Five is a list of five reasons to play older basketball games instead of, or in addition to, their newer counterparts.

Nostalgia gets a bad rap these days. I can understand why, as I’m sure it’s frustrating for younger people to keep hearing about everything being better back in the day (you have no idea how old I feel when I say that). Of course, films, shows, and yes, video games of yesteryear, weren’t perfect. With video games in particular, technological advancements have resulted in significant improvements since the early days of the medium. Unfortunately, that’s also brought recurrent revenue opportunities that interfere with design, prioritising earning power over gamer enjoyment.

There are plenty of reasons, and certainly a ton of pressure, to move on and play the latest NBA 2K. In the best case scenario, a new release is another worthy addition to the series, and one that will keep you entertained for the next year. Unfortunately, when it comes to annual sim basketball games, not every release is better than the last. That streak was broken a long time ago for NBA 2K, and even earlier with NBA Live before that. It’s just the way it goes. A new idea or change in engine doesn’t pan out, or a game is tainted by aggressive microtransactions. You may be left wishing you were playing an old favourite, and why not? Here are five reasons to play older titles. 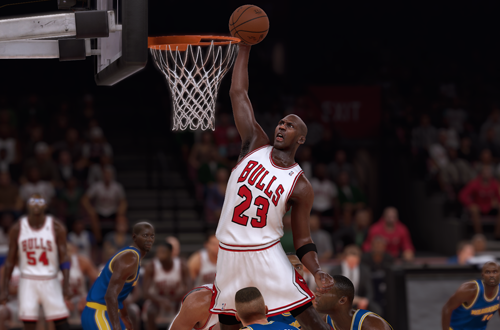 Let’s begin with something I just noted: not every new basketball game is better than the last. There may be consensus here, or it may feel like a major step back to you personally. Maybe they changed a mechanic that you liked, or the community as a whole felt was working great. Perhaps they’ve dropped a feature that wasn’t all that popular, but you still really enjoyed. As I said, a change or a brand new engine may not result in a superior experience, despite good intentions. And yes, maybe they ramped up the pressure of the recurrent revenue mechanics. Whatever the case, you’re not feeling it, and can’t get into it the way you did its predecessor, or an old favourite.

If those are your impressions of and experiences with a title, don’t force yourself to like it just because it’s the new game that everyone’s playing. By all means give games a fair chance; there are learning curves, and negative first impressions don’t always last, especially if you can make reasonable adjustments or receive helpful advice. If none of that changes your view and makes a game more palatable, stick with last year’s game a bit longer, or look to another game in your library that you do enjoy. It’s tougher if you’re a devotee of the online scene or modes with live service content, but if it’s not a deal breaker, there are some fantastic older basketball games that hold up. 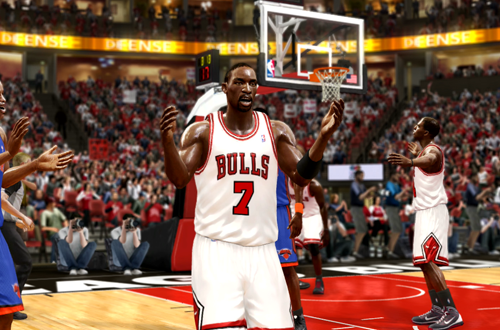 Sometimes, there’s just too much to do, and we don’t get to finish (or even look at) everything in a basketball game before its successor is released. Life can get in the way too, which may leave you with a save file part of the way through a season. If it’s still accessible and you love the game, why not dust it off? We pick up other titles that we get stuck in, or didn’t finish for whatever reason, so why not do the same for older basketball games? Even if you don’t have any save files, there may be a mode that you never spent time with, or content that you haven’t unlocked. Achievement and Trophy hunting in older basketball games can be fun too, especially when they’re challenging.

Depending on the age of the game, and the modes and content in question, you may be locked out of completing some unfinished business. That’s just the way it goes as online play and content has become more prominent. There’s still plenty to enjoy though, especially if you’re a franchise gamer, a title has an offline career mode, or it’s a truly retro game that came before all of that. If you’re unsatisfied with the latest game, or just looking for a change of pace, go back and take care of some unfinished business. Or if, you’re a modder, go back and finish a project you started. As retro basketball gaming becomes more popular, I’m confident you’ll find an audience for it! 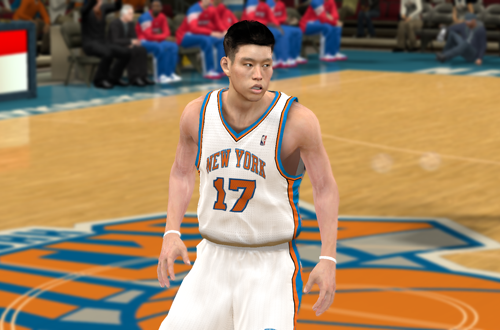 I’ve become very fond of using the phrase “interactive almanacs” when talking about older basketball games. Sure, they may be lacking the context and comprehensive information found in actual almanacs – to say nothing of resources such as Basketball Reference and Wikipedia – but they still capture a snapshot of NBA history. One of the reasons I’ve done so many Familiar Faces in Familiar and Strange Places articles is that I came across numerous examples while revisiting older basketball games. It’s fun to see those stints that you’ve forgotten about; not just big names and their weirder runs, but also noteworthy role players that you tend to associate with a specific team.

Honestly, it can be a lot of fun just firing up older basketball games and browsing through the rosters, looking at lineups and team branding. You’ll probably find you want to at least play a quick game or two to complete the stroll down memory lane, but even spending some time in the frontend can scratch a nostalgic itch. If you still enjoy the gameplay and feel like stepping back in time to an era that you remember fondly however, why not start a season, or replay that year’s Playoffs? Even if it’s just a short visit, you can have a blast interacting with what is now part of NBA history. It’s fun to watch old games and highlights, but retro gaming takes it to the next level.

4. What’s There Is There 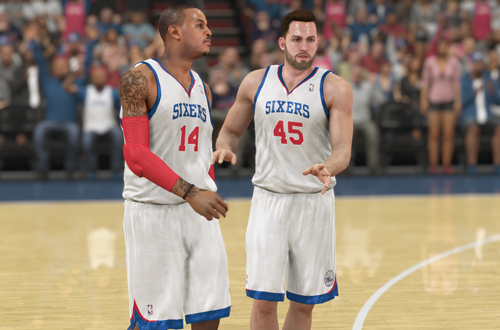 I touched on this while discussing unfinished business, but unfortunately not every basketball game remains intact and as it was at launch. This is particularly true of the past few generations, thanks to the steady increase of online modes and content. At the same time, once support has ended and servers have been shut down, whatever is lost leaves a game in its final state. There’s nothing more that will be lost, compared to newer NBA 2K games where you know you’re on borrowed time in MyCAREER and MyTEAM. You’re not going to be locked out of anything in older basketball games, because that’s either already happened, or wasn’t ever going to happen.

To give you an example, though I felt burned out by the annual grind in MyCAREER in recent games, I got hooked on it again in NBA 2K14 for PlayStation 4. The main reason for that – aside from a fairer progression system, of course – is that it’s available offline and still reasonably complete. That means I can put it aside and pick it up as I please, and play through multiple seasons as I’ve been doing. There’s no pressure to grind for Season rewards, or get everything I can out of the mode before the next game is released. NBA Live 10, NBA Live 06 PC, or NBA Jam: On Fire Edition…the modes that I enjoy in those games remain accessible, and they’re not going anywhere. 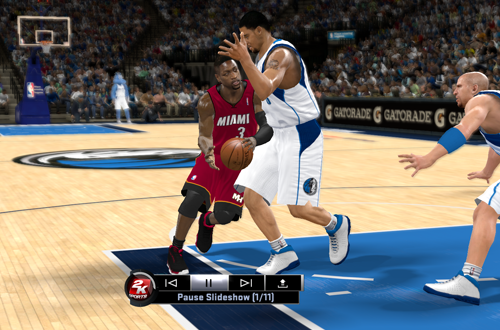 Of course, sometimes we look to the past in order to plan for the future. Some ideas and features fall by the wayside, and it may not be until we revisit older basketball games that remember some of the things we’ve lost. These reminders allow us to make suggestions for future releases, as well as provide examples of how they might work, and how older basketball games best achieved them. As with any other Wishlist request, there’s no guarantee that we’ll see them return. Some features aren’t as viable or necessary as they used to be. With that being said, with a little creativity, there are many ideas in older basketball games that could be repurposed for future titles.

For example, the Pressbook could still be useful in its original form, providing a hub to view highlight clips and screenshots from angles that are difficult to achieve in Instant Replay. Even if this seems superfluous in offline modes, it would be quite useful in online play, where we can’t pause to grab the perfect screenshot, or capture clips from alternate angles. Older basketball games are filled with features like this that could still work as-is, or be revamped to suit contemporary needs. As such, even if you’re enjoying the latest NBA 2K game, it’s still worth looking back at some old favourites to jog your memory about features that could be relevant and viable today.

How often do you play older basketball games? Does retro basketball gaming take up more of your time than playing the latest release? Would you like to see more mods being made for old favourites? Have your say in the comments below, and as always, feel free to take the discussion to the NLSC Forum! That’s all for this week, so thanks for checking in, have a great weekend, and please join me again next Friday for another Five.