Welcome to this week’s edition of The Friday Five! The Friday Five is a feature that I post every Friday in which I give my thoughts on a topic that’s related to NBA Live, NBA 2K, and other basketball video games, as well as the real NBA, and other areas of interest to our community. The feature is presented as either a list of five items, or in the form of a Top 5 countdown. This week’s Five is part ten in a series of lists of retro teams that I’d like to see added to NBA 2K.

With this list of retro teams, I’ve reached a total of fifty throwback squads that I feel would make fun additions to NBA 2K! Although I’ve already covered many of the obvious choices in previous lists, thinking back through over seventy years of NBA history offers up a continuous stream of possibilities. As I’ve noted in my previous articles, some of the recently added retro teams open the door for squads beyond former champions, their opponents, and other great teams of note. Just because a team didn’t achieve great success in real life doesn’t mean that they aren’t fun to play with.

To that end, here are five more retro teams that would be fun to have in NBA 2K by default! Once again, these squads don’t override my previous suggestions; they’re all teams that I’d be interested in seeing included in future games. These suggestions are also assuming that all of the key players (or at least most of them) can be licensed, if they’re not in the game already. After all, it would defeat the purpose of adding new retro teams if they can’t even field five real players, preferably their actual starting five (though NBA 2K does currently include retro teams that are missing one of their regular starters). With all that being said, let’s get to the list! 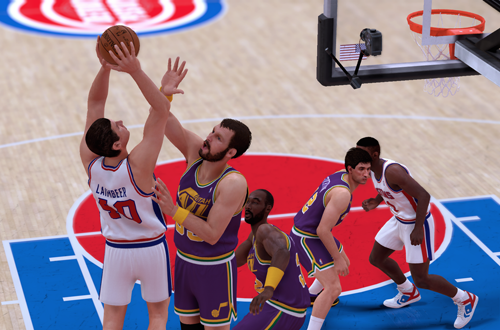 I’ve been considering options for a Utah Jazz team from earlier on in Karl Malone and John Stockton’s careers to join the 1998 squad in NBA 2K. In particular, I wanted one where shotblocker supreme Mark Eaton was at his best alongside the masters of the pick and roll. Although they were more successful in the 1988 Playoffs and won more regular season games in 1990, 1991, and 1992, 1989 was their first 50-win campaign. Karl Malone was named the All-Star Game MVP, Mark Eaton took home Defensive Player of the Year honours with 3.8 blocks per game (not even his career high), and Stockton lead the league in assists for the second time, and steals for the first.

Joining the trio of Malone, Stockton, and Eaton was 1980 Rookie of the Year Darrell Griffith, nicknamed Dr. Dunkenstein. 1989 was Griffith’s last season as a regular starter and double-digit scorer for the Jazz, having been one of the team’s top scorers before the arrival of The Mailman. Thurl Bailey posted 19.5 points per game coming off the bench, while 1983 champion and future coach Marc Iavaroni started alongside Malone in the frontcourt. You could make an argument for including either the 1990 or 1991 squads as they have a couple more familiar names, but the roster of 80s retro teams is a bit thin compared to the 90s, so I’ll stick with the 1989 Jazz. 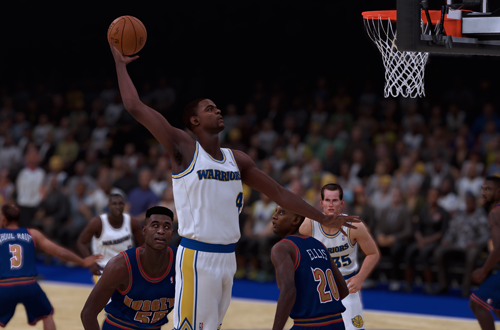 The 1994 season was certainly an interesting one. Michael Jordan had just retired (for the first time), and a lot of up-and-coming stars were looking to make their mark on the NBA. The 1993 Draft provided us with one of the biggest “What If” scenarios of the decade, when the Orlando Magic drafted Chris Webber first overall, but traded him to the Golden State Warriors for Anfernee Hardaway, who became Shaquille O’Neal’s sidekick instead. While it’s fun to wonder what might have been, the trade worked out for both teams. Shaq and Penny led Orlando to the Playoffs, while Rookie of the Year Webber did the same for the Warriors (and did this to Charles Barkley).

Barkley’s Suns had the last laugh, sweeping the Warriors in three games, but C-Webb and the Warriors had a fine year with a 50-32 regular season record. Their success came despite Tim Hardaway missing the entire year, though for the purposes of NBA 2K’s retro teams, he’d have to be included in the roster. The other remaining member of Run TMC, Chris Mullin, was solid despite injuries beginning to take their toll. Top scorer Latrell Sprewell was coming into his own as a first time All-Star, with Avery Johnson and Chris Gatling also playing key roles. Webber was traded after that season due to a falling out with head coach Don Nelson, making the 1994 team rather unique. 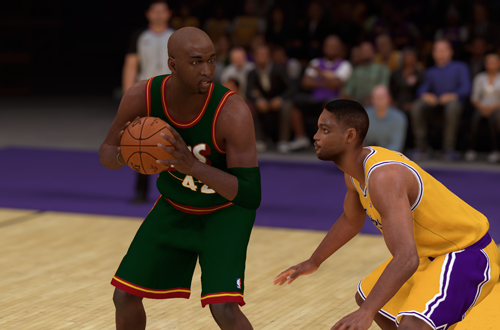 In Part 9 of this series, I nominated the 1998 Cleveland Cavaliers, recipients of Shawn Kemp in a blockbuster offseason trade. The Seattle SuperSonics team that he left remained a force in the West, having acquired Vin Baker from the Milwaukee Bucks in the aforementioned deal. While the new tandem of Baker and Gary Payton was nowhere near as exciting to watch as the dynamic duo of The Reignman and The Glove, they were still a force in their first year together. The 1998 SuperSonics went 61-21 in the regular season before bowing out in the second round at the hands of the Los Angeles Lakers. Additionally, both Payton and Baker were All-Stars that season.

Aside from swapping Kemp for Baker (incidentally, the Bucks received Tyrone Hill and Terrell Brandon from Cleveland in that trade), that Sonics team is quite similar to the 1996 squad already featured among NBA 2K’s retro teams. Familiar faces include Detlef Schrempf, Hersey Hawkins, Sam Perkins, Nate McMillan, and David Wingate. New players include free agent acquisitions Greg Anthony and Jerome Kersey. With a handful of teams from the 1998 season already in the game, however, it’d be great to have another top squad from the last great campaign of the 90s. If the 1998 Cavaliers are included as well, it would allow for some fun grudge matches between the two. 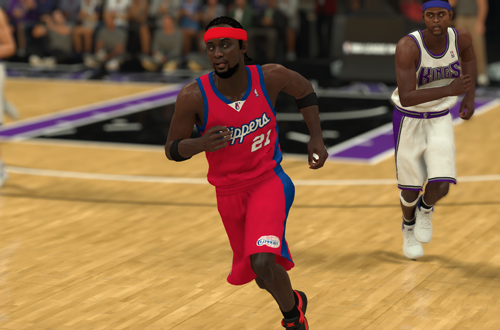 Clippers fans have suffered their fair share of heartache since the team moved to Los Angeles in 1984. Apart from many losing seasons, one of the main sources of said heartache is that on more than a couple of occasions, the Clippers have fielded teams that appeared destined for bigger and better things, but their success was short-lived. There are a handful of Clippers squads that made rare Playoff appearances, with the 2006 team being one that I mentioned in a previous list. I stand by that suggestion, and also offer up the early 90s teams with Danny Manning as an honourable mention, but I have a different one in mind: their squad from the 2002 season.

Granted, the 2002 Los Angeles Clippers didn’t make the Playoffs, but they were very close. With a record of 39-43, they posted their best mark since the 1993 season. It was in fact a better record than the one they had when they snuck into the Playoffs as the eighth seed in 1997: 36-46. They were also a fun team to watch, with a young core that included Elton Brand, Lamar Odom, Darius Miles, Quentin Richardson, Corey Maggette, and Michael Olowokandi. In real life, Odom and Miles teamed up for one of the greatest alley-oops in NBA history. Imagine being able to run with them and create all kinds of gravity-defying highlights on the virtual hardwood as well! 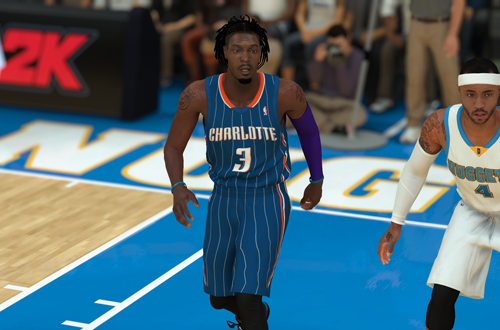 As far as unorthodox choices for retro teams are concerned, this one has to be right up there. By most metrics, the 2010 Bobcats were modestly successful at best. They went 44-38 and were swept by Dwight Howard and the Orlando Magic in the first round, so they’re far from a powerhouse. However, they were the first Bobcats team to qualify for the Playoffs. While that distinction has since been undermined by the franchise’s acquisition of the Charlotte Hornets’ name and records, retroactive recognition aside, they are still the first squad to make the postseason under the Bobcats moniker. They ended a drought, and offered hope that the team was finally becoming relevant.

That didn’t last long, but I still believe that they’d make an interesting addition to 2K’s roster of retro teams. They represent an era in both franchise and league history that has since been retconned, and they’re an obvious underdog. Their roster also boasted a decent array of talent, including Gerald Wallace (an All-Star that season), Boris Diaw, Tyson Chandler, Stephen Jackson, Larry Hughes, Theo Ratliff, and Raja Bell to name a few. On top of everything else, getting them into NBA 2K by default would ensure that audio for “Bobcats” is available, making for a handy asset when it comes to retro roster projects, and perhaps MyLEAGUE/MyGM rebranding and relocation as well.

What are some other retro teams that you’d like to see in future NBA 2K games? Do any of my latest suggestions appeal to you? Have your say in the comments section below, and as always, feel free to take the discussion to the NLSC Forum! That’s all for this week, so thanks for checking in, have a great weekend, and please join me again next Friday for another Five.

I was just thinking about the 2010 bobcats. Gerald Wallace would fit in great with today’s league.

He came a long way from riding the bench for the 2002 Kings!

That 94 Warriors team should’ve been AMAZING if everyone would’ve been healthy. They were a blast in NBA Showdown 94.

Didn’t Showdown have final 1993 season rosters? The SNES version of NBA Live 95 has final 1994 season rosters (since that’s how they did it back then) while the PC version has mid 1995 season rosters, so I remember playing with and against them in ’95 SNES.

Either way, I reckon it’d be a fun team for 2K’s retro squads, and the fact that they were only together for one season makes them special.