Welcome to this week’s edition of The Friday Five! The Friday Five is a feature that I post every Friday in which I give my thoughts on a topic that’s related to NBA Live, NBA 2K, and other basketball video games, as well as the real NBA, and other areas of interest to our community. The feature is presented as either a list of five items, or in the form of a Top 5 countdown. This week’s Five is part eleven in a series of lists of retro teams that I’d like to see added to NBA 2K.

It’s just about time for me to be moving on to some other topics with the Friday Five, as I’ve been covering retro teams I’d like to see in future NBA 2K games for a month now. However, I do have another five teams that I thought of while planning these features, so I figured I’d wrap things up for now and come back with new lists later on down the road. After all, this may be the last list for now, but I’m sure more teams will occur to me. As I’ve said, when you look beyond former champions, their opponents, and other noteworthy teams, you can come up with some fun and unorthodox ideas.

There are certainly some teams in Part 11 that fit that description! With the current decade drawing to a close, I’ve also looked to include a couple more retro teams from the past ten years, as some of them are becoming nostalgic in their own right. If I can talk about NBA 2K17 in Wayback Wednesday, then I can surely include a few teams from the early 2010s on these lists! As with my previous features, I’m making these suggestions in addition to the teams I’ve already mentioned; I’d still like to see those teams in NBA 2K as well. I’m also assuming that enough of the necessary players will be licensed, if they’re not in the game already. With that said, let’s get to the list! 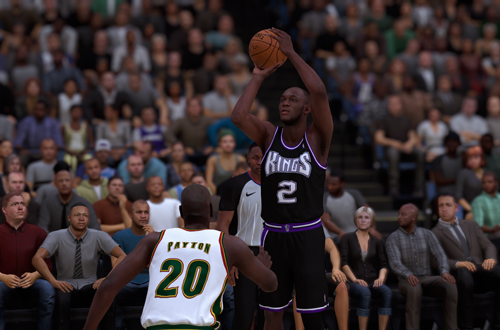 The Sacramento Kings’ 2002 squad is already featured as one of the retro teams in NBA 2K, and for good reason. It remains their best regular season performance with a record of 61-21, and their loss in seven games to the Los Angeles Lakers in that year’s Western Conference Finals is infamous. In terms of success, that controversial clash is up there with an appearance in the Western Finals in 1981 as the Kansas City Kings, and their 1951 championship as the Rochester Royals. They’ve also had some good underdog teams, though. I was thinking of the 1999 team with Jason Williams – and they may well be on a future list – but this time, I’ll opt for their 1996 team.

Basically, I’d like to see a Mitch Richmond-led team in the game. I realise that he’s featured as part of the Run TMC Warriors, but when I was first getting into the NBA, he was already a King. It’s where he spent most of his career, and made all six of his All-Star appearances. Like Glen Rice, I feel he’s somewhat forgotten and overlooked, one of the best shooters and top scorers of the 90s. That plucky 1996 team won 14 of their last 24 games to go 39-43 and make the Playoffs. With Olden Polynice, Brian Grant, Corliss Williamson, Tyus Edney, and Sarunas Marciulionis, they looked like they might hand the Seattle SuperSonics another first round exit, before losing 3-1. 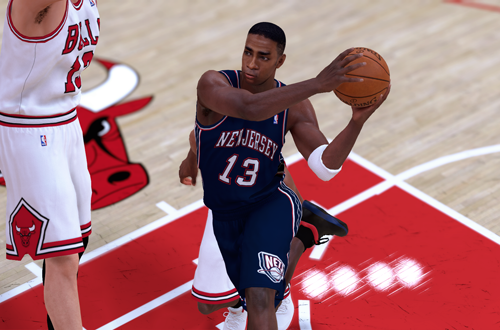 Many young and promising squads have been given the “Team of the Future” label, and on more than a few occasions, it’s turned out to be a massive jinx. Superstition aside, it’s a bold claim that’s led to sportswriters offering sheepish retractions years down the line. The 1998 New Jersey Nets stand as such an example, with one SLAM Magazine cover proclaiming them “Champs by 2001. Count on it.” They were off the mark, though it didn’t stop the publication from boldly supporting future Nets teams with similar high praise. The Nets would indeed have a shot at the championship in 2002 and 2003 with Jason Kidd, but the foundation was laid in the 1998 season.

Jayson Williams – who may be difficult to license due to various legal issues – had a career year, and was named an All-Star for the first and only time. They had a strong point guard rotation with Sam Cassell and Sherman Douglas, some capable veterans in Rony Seikaly, Kendall Gill, Chris Gatling, and Michael Cage, and promising young players including Keith Van Horn and Kerry Kittles. Although they were swept by the Chicago Bulls, they made it a competitive series. Less than a year later, Cassell was traded and Williams suffered a career-ending injury, but a few players from that 1998 team were part of the back-to-back Finals runs. Perhaps SLAM had a point, after all. 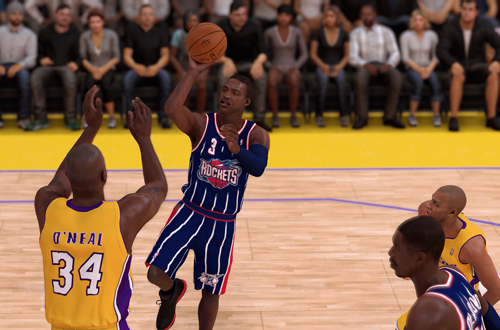 As the balance between the Conferences shifted at the beginning of the 2000s, the 2001 Playoffs would find the Houston Rockets on the outside looking in, despite a record of 45-37. It was a disappointing end to Hakeem Olajuwon’s Rockets career, as The Dream would be traded to the Toronto Raptors in the offseason. Although past his prime and playing less than 30 minutes per game, Hakeem still put up respectable numbers, bouncing back somewhat after a disastrous 2000 season. The Rockets’ star player was now Steve Francis though, the reigning co-Rookie of the Year. He led the team with 19.9 points per game, to go along with 6.5 assists and 6.9 rebounds.

A lot of people seem to forget about Steve Francis, once pegged as a future superstar and cornerstone of the Rockets; indeed, his nickname became “Stevie Franchise”, a nod to his apparent status as a franchise player. Injuries and a career that lasted less than ten seasons are a factor here, along with the arrival of Yao Ming and later Tracy McGrady, whom Francis was traded for. He was once a major star though, and with 2001 being a strong sophomore campaign for him in addition to Hakeem’s last year in Houston, I think it’s an interesting team. Cuttino Mobley, Shandon Anderson, Maurice Taylor, Kenny Thomas, and Walt Williams, round out that Rockets roster. 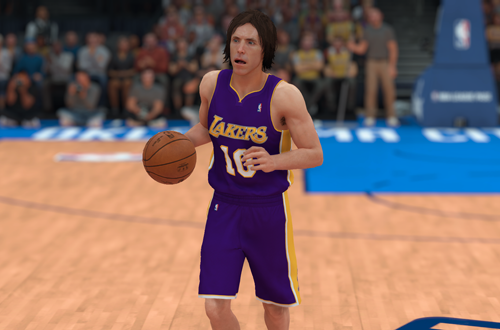 One of the two winningest franchises in the NBA – their perennial rivals the Boston Celtics currently hold the edge in total wins and championships – the Los Angeles Lakers have been very successful throughout the decades due to an innate ability to attract and acquire talent. They’ve been able to assemble some deep, strong squads during the years they’ve won and contended for titles, but other times, attempting to put together a super team has blown up in their face. Their first attempt in the 2004 season – a team I mentioned in Part 1, and is now in fact among 2K’s retro teams – lost to the Pistons in the NBA Finals. A second attempt in 2013 didn’t even get that far.

That was the year the Lakers teamed Kobe Bryant and Pau Gasol up with Dwight Howard and Steve Nash. Needless to say, expectations were high, and Lakers fans took to Nash in particular. Just like in 2004 however, luck wasn’t with the team from Tinsel town. Nash only appeared in 50 regular season games, and missed the final two games of the first round as they were swept by the San Antonio Spurs. Kobe ruptured his Achilles tendon with two games left in the season, and Gasol was also injured for most of the year. They were a bust in real life, but they’d be fun in NBA 2K with a roster that also included veterans Metta World Peace and Antawn Jamison. 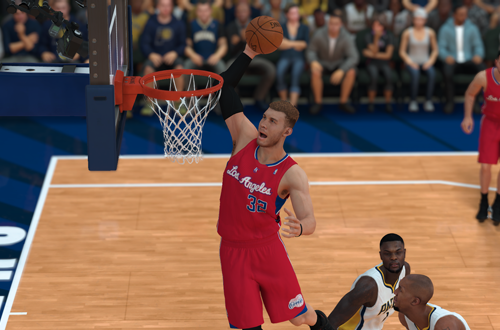 Even though this year’s Los Angeles Clippers are overachieving impressively, holding onto a Playoff spot with the regular season winding down, the excitement of Lob City is quickly becoming a distant memory. With Blake Griffin now in Detroit, Chris Paul in Houston, and DeAndre Jordan in New York, it seems so long ago that we saw so many dazzling alley-oops being finished off with power and flair. A punchline for most of their tenure in Los Angeles, the Clippers have enjoyed their most successful run this past decade. You could arguably choose pretty much any of the Lob City squads to include among the recent retro teams in NBA 2K, but I’m going with 2014.

Their record of 57-25 was the best regular season mark in franchise history. They also reached the second round for only the third time since becoming the Clippers, losing to a competitive Oklahoma City Thunder team. Paul and Griffin were All-Stars, while Jordan had a breakout year under Doc Rivers, who was in his first year coaching the team after a controversial departure from the Boston Celtics. Jamal Crawford was the Sixth Man of the Year, and their roster also included J.J. Redick, Matt Barnes, Hedo Turkoglu, Jared Dudley, Danny Granger, Darren Collison, and Glen Davis. They’re a fun squad, and one that should be fairly easy to license for the roster of retro teams.

What are some other retro teams that you’d like to see in future NBA 2K games? Do any of my latest suggestions appeal to you? Have your say in the comments section below, and as always, feel free to take the discussion to the NLSC Forum! That’s all for this week, so thanks for checking in, have a great weekend, and please join me again next Friday for another Five.