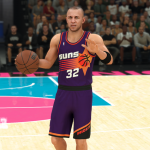 Welcome to another edition of The Friday Five! Every Friday I cover a topic related to basketball gaming, either as a list of five items, or a Top 5 countdown. The topics for these lists and countdowns include everything from fun facts and recollections to commentary and critique. This week’s Five is part twelve in a series discussing retro teams that I’d like to see added to NBA 2K.

This is one of my longest-running series of Friday Five articles, yet somehow, I haven’t posted a new instalment since 2019! It’s not that I haven’t had any ideas for retro teams that I’d like to see added to NBA 2K, either. In fact, I had ten further suggestions when I posted Part 11 in this series, all ready to be written about. I even had screenshots prepared for those articles. Indeed, the series has been on the shelf for so long while I discuss other topics here in The Friday Five, that it only felt right to get brand new screenshots using a newer game!

With that out of the way, what other retro teams could I possibly suggest that haven’t been mentioned already? Obviously I’ve covered a lot of ground so far, and a few of the teams I suggested in earlier instalments have actually been included since. I’m not claiming credit here, but since I was genuinely keen to see those retro teams be added to the games, I’m pleased that it happened! Once again, I’ve been delving into some unorthodox suggestions, since 2K already made the wise decision to expand beyond conventional choices of champions, their opponents, and other celebrated squads. Without any further ado, here are five more retro teams that’d I’d really like to see. 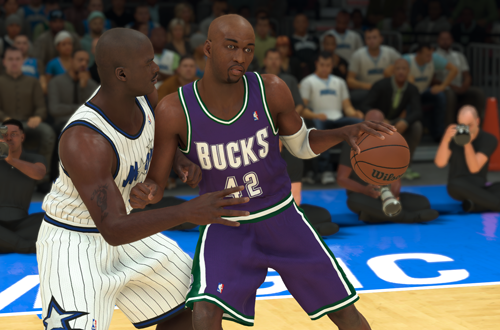 Sure, the 1971 NBA Champion Milwaukee Bucks are more historically significant, which is why they’re already in the game. The 2021 Milwaukee Bucks are likewise a more celebrated unit, but I’m not a big fan of including recent squads and calling them classic teams. Besides, as I noted, the door has been opened to more unorthodox retro teams to be featured! The 1995 Bucks would certainly be that. They finished 29-53, extending their Playoff drought of the time to four seasons and counting. To that end, the 2001 Bucks – a squad I’ve previously suggested – would be a far more sensible addition. They were more successful, with some recognisable and noteworthy names.

However, the 1995 Bucks would get some memorable role players into the default rosters, while also utilising some names that are already available. All-Star Vin Baker and 1994 number one pick Glenn Robinson are on the Bucks’ All-Time squad. Alton Lister, Johnny Newman, Jon Barry, and Aaron Williams, are also already in the game. Including those 1995 Bucks would give us access to players such as Eric Murdock, Todd Day, and my personal favourite forgotten NBA reserve, Marty Conlon! More importantly, they were a young underdog team that’d be fun to use against the other mid 90s retro teams in NBA 2K, obviously the 1995 Knicks and Magic in particular. 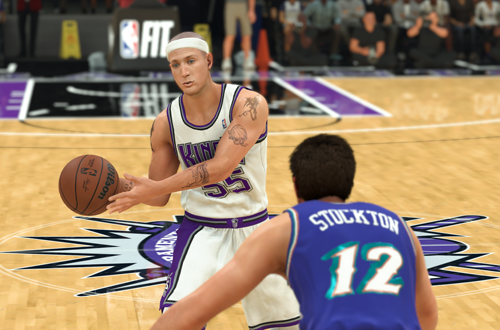 While the 2002 Kings are rightfully included in NBA 2K given the infamy of their Western Conference Finals series against the Los Angeles Lakers, their 1999 team would also make a good addition to the selection of retro squads. Some of the key players are admittedly the same, but there are also notable differences between those lineups, and therein lays the appeal. Having Jason Williams at the point rather than Mike Bibby changes the team’s style. I also like it when retro teams in NBA 2K have at least one year-appropriate opponent. The 1999 Knicks really should have the Spurs to go up against, but in lieu of that, C-Webb’s first year with the Kings works too.

Also, while future Kings teams would be more successful, that era began with the 1999 squad. They’d had a token Playoff appearance in 1996, where the SuperSonics bounced them 3-1 in the first round. The lockout year saw their first winning season since moving to Sacramento, and they took the Utah Jazz – fresh off an NBA Finals appearance against the Chicago Bulls for the second straight year – to the limit. If you look at their roster, you’ll see how they’re a link between their underwhelming 90s squads, and the early 2000s 50+ win teams. On top of already having a few of their key players, they also have some veteran misfits that’d make them fun to play with. 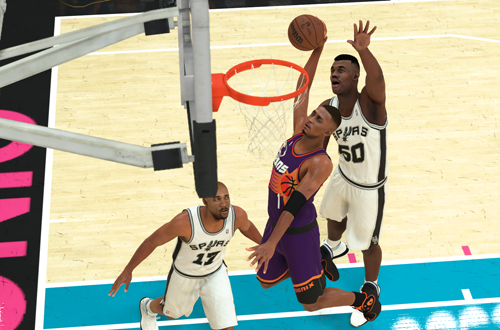 Hall of Famer Tim Duncan is a five-time NBA Champion, but The Big Fundamental never won back-to-back titles. In fact, he didn’t even make back-to-back NBA Finals appearances until 2013 and 2014. I mention this because that pattern was established very early on in his career, when the Phoenix Suns defeated his San Antonio Spurs in the first round in 2000. Both teams finished 53-29 that year, with San Antonio holding homecourt advantage by virtue of a tiebreaker. Granted, Duncan didn’t play due to injury, but the Suns’ victory meant that the Spurs were the first defending champs not to repeat since 1987, and the first since 1984 to lose in the first round the next season.

It likely would’ve been a different story had Duncan been healthy. Still, the 2000 Suns were a pretty good team in their own right, and probably could’ve at least put up a fight. They had an exciting new backcourt, pairing Jason Kidd with a still relatively healthy Anfernee Hardaway. They had a rookie Shawn Marion, Rodney Rogers, Luc Longley, Clifford Robinson, and Rex Chapman. Even Suns Legend Kevin Johnson made a comeback that year! Some might say they were a flash in the pan, as Penny was injured the next year (and never the same again), and Kidd was gone by 2001. They’re no less worthy than the 2000 Raptors and Blazers though, and just as exciting. 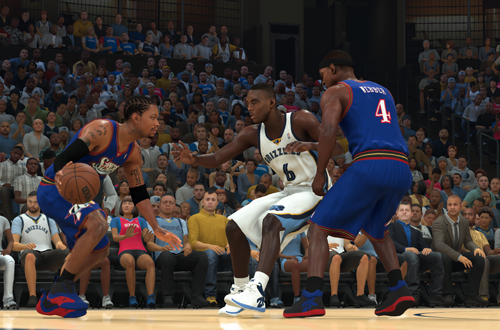 Talk about an underwhelming team in real life that’s nevertheless a great squad for video games! The 2006 76ers finished 38-44, which was actually the second-best record in a dismal Atlantic Division. This placed them two games behind the eighth-seeded Bucks. Since this was long before the Play-In Tournament rewarded teams that finished ninth and tenth – yeah, I’m not a fan of that – they missed the Playoffs, despite having a roster that included Allen Iverson, Chris Webber, Andre Iguodala, Kyle Korver, Lou Williams, John Salmons, and Samuel Dalembert. They weren’t all in their prime, but Mo Cheeks’ squad unquestionably underperformed that year.

That’s the great thing about video games, though. In our hands, virtual players can overcome chemistry issues, be their best selves, and have better luck with injuries. Speaking of which, Jamal Mashburn also began the year on that team, having sat out the entire 2005 season – during which he was traded to Philadelphia – following knee surgery. Although he was cut midseason, perhaps he could be included if the 2006 76ers were to be added to the roster of retro teams in NBA 2K. Even without him, they’re a fun team to play with, despite their real life shortcomings. As far as ideas for unorthodox classic squads go, they rank up there as one of the most entertaining. 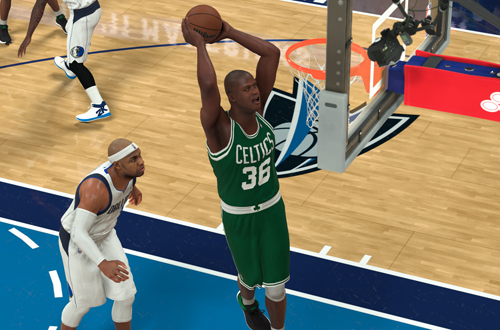 Seeing the Los Angeles Lakers struggle to a disappointing finish in 2022 brings to mind other teams that looked a lot better on paper, and might’ve fared better in reality if they’d been assembled some five years prior. Not all of them were as disappointing as the 2022 Lakers, but a prime example of a past-its-prime roster comes courtesy of their eternal rivals, the Boston Celtics. Coming off a heartbreaking Game 7 loss to the Lakers in the 2010 NBA Finals, the Celtics loaded up in order to make another run. They acquired former Laker Shaquille O’Neal, as well as Jermaine O’Neal for good measure. Jeff Green, Delonte West, and Troy Murphy were also brought in for depth.

Unfortunately for Boston, both O’Neals were banged up with their best days long behind them, particularly Shaq who was 38 and entering his 19th season. Their Big Three of Paul Pierce, Kevin Garnett, and Ray Allen were healthier, but also another year older. The youngest of their four All-Stars, Rajon Rondo, was already a great playmaker, but not a franchise player. Glen Davis was a non-factor in the postseason. They still went 56-26 though, and made it to the second round. There they fell 4-1 to the team from South Beach, LeBron having decided to take his talents there. They’re a much better team than the 2022 Lakers though, and would be a fun retro squad in 2K.

Would you be in favour of these retro teams being added to NBA 2K in the future? Which other teams would you like to see? Let me know in the comments, and as always, feel free to take the discussion to the NLSC Forum! That’s all for this week, so thanks for checking in, have a great weekend, and please join me again next Friday for another Five.

Speaking of Jamal Mashburn, the ’96 Mavericks are my favorite bad team to play as in my custom 1996 season roster in NBA 2K14. With Mashburn, Jason Kidd, and Jim Jackson, they had a Big Three in the making. Jackson and Mashburn were decent three-point shooters but George McCloud stands out as a shooter ahead of his time. With the shortened three-point line in 1995-96 he jacked up almost 9 threes in 36 minutes per game and still managed to convert 38% of them! In real life the “three J’s” had issues playing together, and Mashburn missed most of the season. However, in 2K14, this team is a force to be reckoned with.

Last edited 7 days ago by rhythm_is_life

No doubt! I included the 1995 Mavs in one of the previous lists, mostly because it was the only full season they played together due to injuries and eventually them all being traded away. But any team with The Three Js is a fun What If.