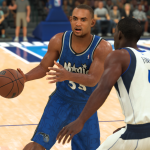 Welcome to another edition of The Friday Five! Every Friday I cover a topic related to basketball gaming, either as a list of five items, or a Top 5 countdown. The topics for these lists and countdowns include everything from fun facts and recollections to commentary and critique. This week’s Five is part thirteen in a series discussing retro teams that I’d like to see added to NBA 2K.

This isn’t the first time I’ve revisited the topic of retro teams that I’d like to see in NBA 2K in back-to-back weeks. Although I do like to spread out sequel articles in the name of variety, sometimes I’ll stick with a topic if the next part is in the can, and it still feels relevant. Parts eight to eleven of this series came out in consecutive weeks back in 2019, and as I mentioned in part twelve, I’ve already shelved the topic for so long that I needed to take new screenshots from the latest game. Also, I couldn’t pass up the opportunity to post the thirteenth instalment of the series on Friday the 13th!

With that being said, let’s get into the next five retro teams that I’d be in favour of the developers adding in future NBA 2K games. Actually, I’m cheating and suggesting six teams in a list of five, but you’ll see why when you get there. As I’ve previously noted, since 2K has ventured beyond the parameters of iconic teams, such as former champions, their opponents, and other perennial powerhouses, my lists have likewise explored some more unorthodox choices. My aim is to suggest teams that are fun to play with, historically significant in some way, and would allow for some handy new assets to be included for modding projects. I believe these five – uh, six – fit the bill. 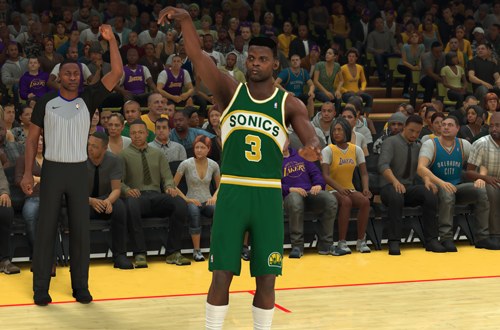 Given that the bitterness over the Sonics’ relocation to Oklahoma City and rebranding to the Thunder still hasn’t really subsided over a decade later – and one can certainly understand why – I’m sure that any celebration of Seattle in NBA 2K’s retro teams would be welcomed with open arms. We already have the 1996 team in the game, as they’ve been there since The Jordan Challenge in NBA 2K11. Obviously there should always be a Shawn Kemp and Gary Payton Sonics squad in NBA 2K, but there are others that could make for fun additions to the game’s complement of retro teams. The 1987 team is one that comes to mind for me, and I believe it’d be a popular choice.

While the 1979 Championship team is a candidate, pre-three-point era teams aren’t always as fun to play with. That’s not to say I’m against the inclusion of pre-80s retro teams in NBA 2K, but I believe the 1987 Sonics are more appealing. You’ve got a young Dale Ellis to bomb threes with. Xavier McDaniel is there to bully other players in the paint, Tom Chambers can fill up the scoresheet and dunk over opponents, and Terence Stansbury can also fly. They also had a rookie Nate McMillan, and a veteran Maurice Lucas. They could be matched up with the 1987 Lakers, the eventual champs that they actually faced in a valiant effort in the Western Conference Finals that year. 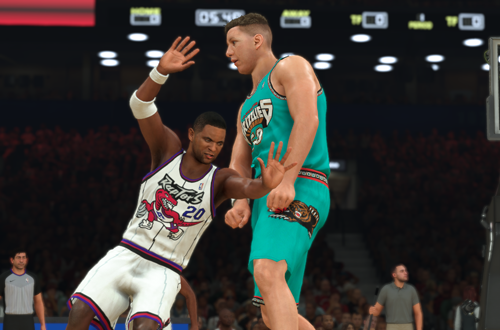 Here’s where I’m cheating, and including two teams for the price of one. I’m doing so for a couple of reasons. The Raptors and Grizzlies will always be linked, since they joined the NBA at the same time during a memorable era in league history, and were both (originally) Canadian teams. Their inaugural seasons were not their best, as is often the case for expansion clubs. In that respect, by themselves, neither are really the most exciting candidates for new retro teams in NBA 2K. Together though, they represent a milestone in NBA history. There’s also some decent talent between them, and they’d at least provide a fair match-up for each other among the classic squads.

It’d also be kind of fun to have the two best teams of the 1996 season – the Bulls and the SuperSonics – as well as two of the worst (the expansion Raptors actually had a better record than the Philadelphia 76ers that year). They obviously have memorable uniforms, and while those throwbacks are available to their current teams and the All-Time squads, I’d enjoy having retro teams that actually wore them. On top of that, getting a Vancouver Grizzlies team into the game would be great for retro season mods, since it would add appropriate audio and arena assets. If nothing else, these teams would be far more retro than adding champions from a couple of years ago. 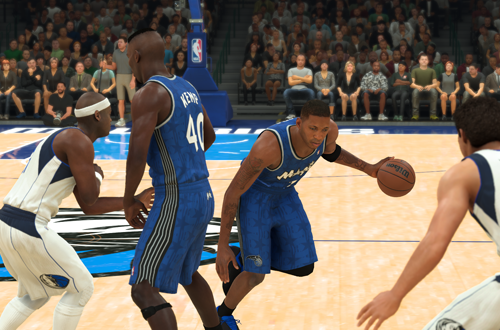 There are some big “What Ifs” when it comes to the Orlando Magic of the early 2000s. What if Tim Duncan had signed with the team in the 2000 offseason? He was apparently close, before a last minute meeting with Gregg Popovich convinced him to stay. The Magic might’ve still found more success if Grant Hill had fully recovered earlier and stayed healthy, forming a dynamic duo with emerging All-Star Tracy McGrady. While he barely played with Grant Hill, T-Mac had some other notable teammates in Orlando, including a past-his-prime Patrick Ewing, a young Mike Miller, a returning Horace Grant, Darrell Armstrong, Dee Brown, and Rod Strickland.

Oh, and Shawn Kemp, in his final NBA season! For me, that’s the deciding factor in choosing the 2003 Magic as the representative of those early 2000s “What If” Orlando teams. They had T-Mac, Kemp, Grant, Armstrong, Drew Gooden, Pat Garrity, Jacque Vaughn, and Steven Hunter. Although he missed the entire season, Grant Hill was on their roster, so he could still be included too. As you may also recall, that Magic team were the eighth seed, and led the top-seeded Pistons 3-1. T-Mac made his ill-fated comments about getting out of the first round – which they would’ve, if not for the new 7-7-7-7 format – and the rest is history. They’re a good video game team, though. 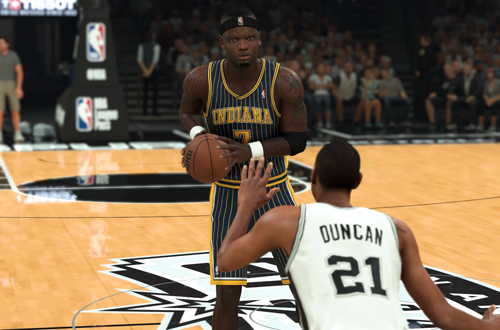 So, as far as retro teams are concerned, this is one that may be too controversial to add to NBA 2K. The 2005 Pacers were of course participants in the Malice at the Palace, which saw lengthy suspensions for Jermaine O’Neal, Stephen Jackson, and Metta Sandiford-Artest (formerly Ron Artest, and later Metta World Peace). In fact, Pacers players were suspended for a combined 137 games, compared to just nine for the Pistons. With that in mind, the NBA probably isn’t that keen on celebrating this particular squad. It’s unfortunate, as in the wake of that ugly brawl, they went 44-38, toppled the Celtics in the first round, and took Detroit to six games in the second.

However, the real barrier to the inclusion of the 2005 Pacers is Reggie Miller, who continues to decline to appear in NBA 2K. He’d be the main reason for getting the team into the game, as it was his final season and NBA farewell, so his absence would render their inclusion pointless. As I’ve said before, in making these suggestions for retro teams I’d like to see in NBA 2K, I’m working under the assumption that the necessary players could be licensed. Obviously this would be the best case scenario, wherein Reggie Miller and Take-Two can come to agreeable terms. It probably won’t happen and the potential controversy might still be a deterrent anyway, but it’d be fun. 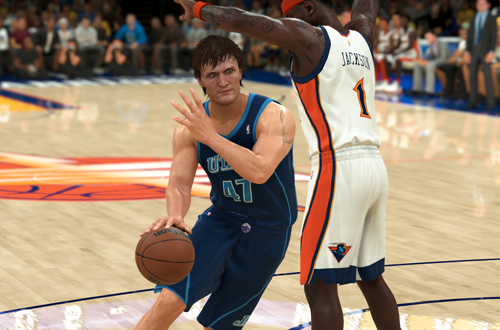 I’m surprised that the 2007 Jazz haven’t been included in the roster of retro teams in NBA 2K yet. I assume it’s due to an inability to license some of the key players, as they are a significant squad from the mid 2000s. You may remember them as the second round opponent of the “We Believe” Warriors, as they ended Golden State’s Cinderella run in five games. Of course, that Jazz team also broke a Playoff drought – admittedly not nearly as long as the one the Warriors had suffered – making their first postseason appearance since the retirement of John Stockton, and departure of Karl Malone. It was the first season in a brief resurgence that ended up lasting four years.

To that end, it’s one of the most significant eras in team history, outside of the early Stockton-Malone years, the later Stockalone seasons that included two NBA Finals appearances, and their more recent success. Their 2007 lineup included players such as Carlos Boozer, Deron Williams, Andrei Kirilenko, Derek Fisher, Ronnie Brewer, Paul Millsap, and Mehmet Okur. Once again, their second round series with the Warriors was memorable, and they’re the only Utah Jazz team without Stockton and Malone to make the Conference Finals. The 2007 Warriors are already one of the retro teams in NBA 2K, so if there are no licensing issues, I’d like to see the Jazz, too.

That’s probably going to do it for now, but I can’t rule out further instalments if other ideas for new retro teams in NBA 2K come to mind. In the meantime, what are your thoughts on these latest suggestions? Which other retro teams would you like to see added to NBA 2K? Have your say in the comments, and as always, feel free to take the discussion to the NLSC Forum! That’s all for this week, so thanks for checking in, have a great weekend, and please join me again next Friday for another Five.