Welcome to this week’s edition of The Friday Five! The Friday Five is a feature that I post every Friday in which I give my thoughts on a topic that’s related to NBA Live, NBA 2K, and other basketball video games, as well as the real NBA, and other areas of interest to our community. The feature is presented as either a list of five items, or in the form of a Top 5 countdown. This week’s Five is part six in a series of lists of retro teams that I’d like to see added to NBA 2K.

Did you think that twenty-five suggestions for new retro teams would be all that I’d be able to come up with? Let’s make it an even thirty! Yes, there are plenty more retro teams that could be added outside of the champions, NBA Finalists, and perennial contenders that originally made up most of the squads from yesteryear available in NBA 2K. As long as Visual Concepts are willing to add some other interesting teams, there are several that we can come up with that were noteworthy for one reason or another, even if they weren’t among the most successful squads in history.

As usual, a reminder that these suggestions don’t cancel out my previous picks, as I’d still like to see those retro teams added to the game at some point. These are just five more that would also be fun additions. Likewise, not all of the players are currently licensed and there’s no guarantee that 2K would be able to secure their likeness rights, but these suggestions are operating under the assumption that they can sign most of (if not all of) the significant players. After all, there’d be no point including the teams if all of the big names won’t sign on. Without any further ado, here are the next five retro teams that I believe would be great to have in future NBA 2K games. 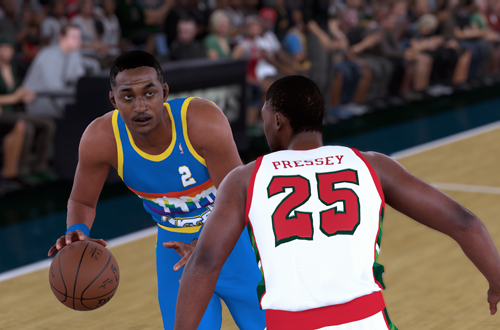 Doug Moe’s Denver Nuggets teams may not have been known for their commitment to defense, but man, could they ever score! Their run and gun style with some of the best offensive players in league history would definitely make for a fun addition to NBA 2K’s selection of retro teams. It’s a little tough to choose between the 1984 and 1985 teams, though. The ’84 squad was part of the highest scoring regular season game in league history, and paired up Kiki Vandeweghe and Alex English. Dan Issel was also a member of the roster, as was a young Danny Schayes. The main drawback is that there aren’t a lot of particularly recognisable names outside of those players.

It’s a similar story with the 1985 team, which split up their high-scoring duo when they traded Vandeweghe to the Portland Trail Blazers. The deal landed them Fat Lever though, who still holds the team record for most assists in a single game, and ranks second in club history for total assists and assists per game. Lever would also go on to flirt with averaging a triple-double in a couple of seasons. Six players averaged double figures in scoring for the ’85 Nuggets, compared to four the year prior. They also won more games and made it to the Conference Finals, taking a game from the Los Angeles Lakers. Either would be a good choice, but I’d give the edge to ’85. 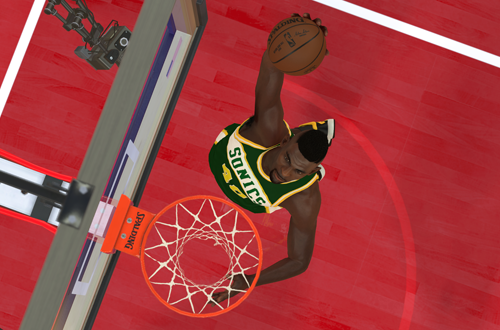 Speaking of the Denver Nuggets, their 1994 team was originally included as one of the new retro teams for NBA’s Greatest, as the opponent for Hakeem Olajuwon’s challenge. While they battled the Rockets as a member of the old Midwest Division, the team the 1994 Nuggets are most associated with are the Seattle SuperSonics. In one of the most famous first round upsets in NBA history, the eighth-seeded Nuggets toppled the top-seeded Sonics in five games, winning three straight after dropping the first two. The image of Dikembe Mutombo lying on the floor, clutching the basketball and laughing joyously, is an iconic moment that’s been shown many times.

Until their NBA Finals appearance in 1996, the SuperSonics teams of the mid 90s were beginning to earn a reputation for disappointing postseasons. They had become a force to be reckoned with in the regular season, and the 63 games they won during the 1994 campaign was a franchise record, though they’d best it two years later with a 64-18 season. The names on that 1994 Sonics team should be very familiar to long-time NBA fans: Shawn Kemp, Gary Payton, Detlef Schrempf, Sam Perkins, Ricky Pierce, Kendall Gill, Michael Cage, and Mr Sonic himself, Nate McMillan. It’d be great to replay that clash with the Nuggets, and get the jerseys from that era into the game. 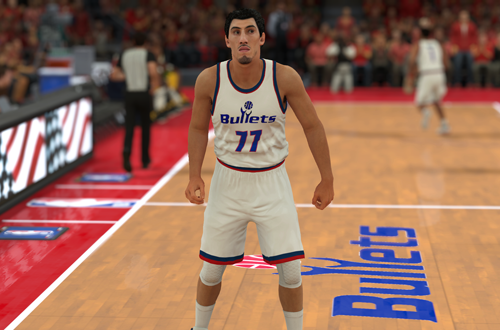 It wouldn’t be a list of retro teams without a squad from 1997! Well, not a list that I’m compiling, at any rate. I would like to see at least a couple of teams from that season in the game to match up with the ’97 Miami Heat though, and the Bullets are another interesting candidate. The final year the team went by the Bullets moniker before they became the Wizards, they had their first winning season in ten years, and also broke an eight year Playoff drought to retire their nickname in style. Sure, they lost to the Chicago Bulls in a sweep, but they came very close to taking Game 3. At the time, it looked like they might be primed for bigger and better things.

Unfortunately it wasn’t to be, and over the next few years, the team would be broken up piece by piece. Their 1997 roster featured a respectable amount of talent, though. Chris Webber was their All-Star, flanked by Fab Five teammate Juwan Howard. The towering Gheorge Muresan was the man in the middle, leading the league in field goal percentage and making his presence felt. Rod Strickland ran the point, while Tim Legler was a gun from the outside. Harvey Grant, Tracy Murray, Jaren Jackson, and Calbert Cheaney were also among their key players. Notably, Ben Wallace was also a rookie on the team, signing on in October after going undrafted. 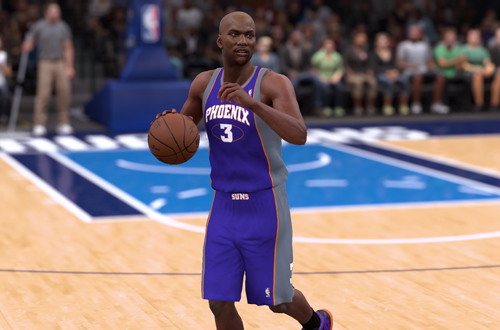 The early to mid 2000s saw some interesting squads that didn’t necessarily have a lot of success, but featured a collection of talent that didn’t look too bad on paper. Such teams are often fun to play with in video games, making them viable candidates to join NBA 2K’s roster of throwback squads. I originally considered the 2004 New York Knicks, or even their 2006 team that featured a backcourt of Stephon Marbury and Steve Francis, but I opted for an earlier Starbury squad: the 2003 Phoenix Suns. It’s a little close to Steve Nash’s 2005 Suns that are in the game already, and there are some familiar faces, but overall those teams do have a different look and feel.

First of all, there’s Marbury as the team’s point guard rather than Nash. The roster also features Anfernee Hardaway in what was probably his last productive season. Shawn Marion was on the team, and in his first All-Star campaign. Amar’e Stoudemire was a rookie – the Rookie of the Year, in fact – and while not yet the player he’d become, he still made an impact. A young Joe Johnson was also on the roster, as were veterans like Tom Gugliotta, Bo Outlaw, and Randy Brown. The 2003 Suns managed to take the eventual champion San Antonio Spurs to six games in the first round, in what turned out to be a very competitive series between first and eighth seeded teams. 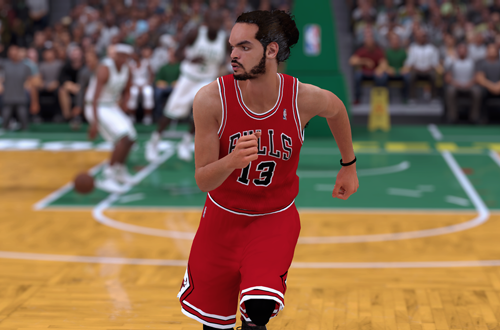 There’s definitely a lot of bias in this pick, and it may be overkill given that the 2011 Chicago Bulls are already among the retro teams in NBA 2K, but it’d be fun to play with one of their better post-championship squads from before Rose’s emergence. Originally I thought of the Baby Bulls teams of the early 2000s, but a few of the key players were still around in 2009, and the ones that weren’t are either less appealing to play with, might be harder to license, or both. I also don’t want a squad with Ben Wallace on it. Besides, the 2009 team is the group that pushed the Boston Celtics to the limit in what was one of the most exciting first round series of all-time.

Derrick Rose was in his rookie season, while Ben Gordon topped the team in scoring with the second highest mark of his career. Joakim Noah was starting to come into his own, and Brad Miller and John Salmons both proved to be valuable pick-ups at the trade deadline. Kirk Hinrich was solid off the bench despite missing a big chunk of the season due to injury, and Tyrus Thomas…well, he gave us Bulls fans false hope, but it was a career year for him nevertheless. With this decade racing to a close, the squads from around ten years ago include some fine choices for 2K’s retro teams, and it’d be fun to battle the Celtics from that era with this plucky Bulls unit.

What other retro teams do you want to see added in future NBA 2K games? Are you interested in seeing any of the teams that I listed? Have your say in the comments section below, and as always, feel free to take the discussion to the NLSC Forum! That’s all for this week, so thanks for checking in, have a great weekend, and please join me again next Friday for another Five.

I know this is a long shot but how about the 1992-93 Los Angeles clippers. Danny Manning Ron Harper and Mark Jackson are in the game. All we need is Stanley Roberts and Ken Norman to round it out. Fun team to play with.

I like it. Adding Ken Norman is another player for the 1997 Hawks too, a team I mentioned in Part 4. There’s also Loy Vaught, and let’s not forget Gary Grant, who produced one of my favourite lucky shots back in the day: https://www.youtube.com/watch?v=xBZ9cs5OVtE

1990 Phoenix suns or 1991 Phoenix suns. Kevin Johnson, Thunder Dan, Jeff Hornacek and Tom Chambers are in the game. Very fun team to play with. And the 1990 squad knocked out a magic Johnson Lakers from out of the playoffs.

Correction: it was the 2010 Magic I listed, so that Vince Carter could be included.

I’ve recently watched a YT video reminiscing Steve Francis’ career, and I think either the 2003 or 2004 Houston Rockets can be fun to play with. A young Yao Ming playing with Francis and Cuttino Mobley sounds enticing to control.

A prime Stevie Franchise-led team would be cool, definitely. The 2004 team did slightly better and made the Playoffs, but the 2003 team has the old pinstripe jerseys that I like. It’d also stand out more from the 2008 team, which has the same logos and jerseys as the 2004 squad, so we can cover more of the team’s history.

There is nothing bias about that Bulls pick; that team is awesome.

I certainly feel that way, but I am a Bulls fan, so I figured that might be a factor. 😉