Welcome to this week’s edition of The Friday Five! The Friday Five is a feature that I post every Friday in which I give my thoughts on a topic that’s related to NBA Live, NBA 2K, and other basketball video games, as well as the real NBA, and other areas of interest to our community. The feature is presented as either a list of five items, or in the form of a Top 5 countdown. This week’s Five is part seven in a series of lists of retro teams that I’d like to see added to NBA 2K.

It seems that I can’t stop thinking about historical content that I’d like to see in future editions of NBA Live and NBA 2K. Following on from last week’s countdown of the Top 5 Legends I’d like to see return to NBA Live, I’ve got another list of five retro teams that I believe would make great additions to NBA 2K. You’d think I might be out of ideas after parts one, two, three, four, five, and six, but there are still several teams outside of champions, their opponents, and other perennial contenders that would enhance the selection of retro teams.

As with the previous articles, I’ll start out by explaining that my previous picks still stand. These new picks aren’t meant to replace my previous suggestions, or take any priority over them. I’ll also mention once again that these suggestions are being made under the assumption that all (or at least most) of the key players could be licensed, if they don’t already appear in NBA 2K. After all, it would defeat the purpose of adding any historical squad if none of their star players and other key members of the team were featured. With that being said, let’s get to another five retro teams that I’d like to see added to NBA 2K’s roster of historical content. 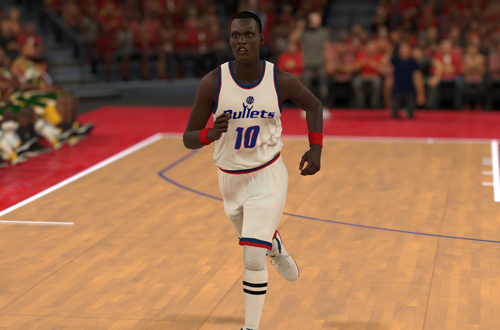 When it comes to including the 1988 Washington Bullets, I have two big reasons for making that suggestion. Well, one big reason and one little reason, if I want to be cute about it. As you’ve probably guessed, I am of course referring to Muggsy Bogues and Manute Bol, who at 5’3″ and 7’7″ respectively are the shortest and tallest players in NBA history. Muggsy was in his rookie year while Manute was in his third and final season with Washington before being traded to the Golden State Warriors, and both players came off the bench for most of the season. They were sometimes out on the floor together though, and of course, posed for this classic photo. Awesome.

While the Manute-Muggsy connection is a large part of the team’s appeal, they’re not the only players of note on that squad. The player that Bol was backing up was the late great Moses Malone, whose inclusion in NBA 2K would be great for more than a couple of retro teams. Bernard King was also on the team, still trying to recapture his old form following a knee injury a couple of years earlier. Guard Jeff Malone, a two-time All-Star and reliable 20 ppg scorer, led the team’s attack. Darrell Walker, Charles Jones, and Frank Johnson are other recognisable names on this team that went 39-43 and lost to the Eastern Conference Champion Detroit Pistons 3-2 in the first round. 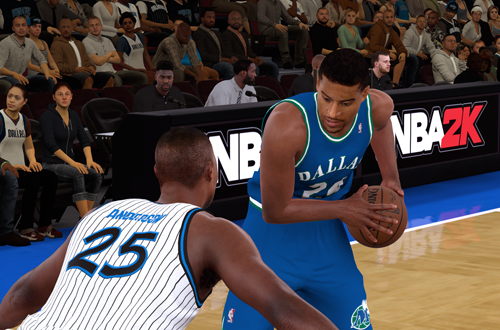 If you grew up watching the NBA in the mid 90s, you’ll no doubt remember the hype that surrounded the “Three Js” in Dallas. Between the days of Mark Aguirre, Rolando Blackman, and Derek Harper in the 80s, and the arrival of Dirk Nowitzki in 1998, the Mavericks were perennially one of the worst teams in the league. They even lost 71 games in 1993! There were glimmers of hope though, and being in the lottery year after year had allowed the team to snare some promising young talent, even though they missed out on the top pick every time. Their star trio – the aforementioned Three Js – were Jamal Mashburn, Jim Jackson, and Jason Kidd.

Unfortunately, they remain one of the big “What Ifs” of the 90s. A combination of injuries and chemistry problems resulted in them only playing one full season as a trio: the 1995 campaign. Even then, Jackson missed 31 games, and although Kidd was the co-Rookie of the Year with Grant Hill, he wasn’t quite yet the player that he would become. It didn’t help that the rest of the roster was kind of thin, aside from a couple of notable players that included Popeye Jones, Lucious Harris, and George McCloud. Their 36 wins was their best mark since 1990, and wouldn’t be topped until 2000. All in all, I believe that they’d make for a fun team to play with in NBA 2K. 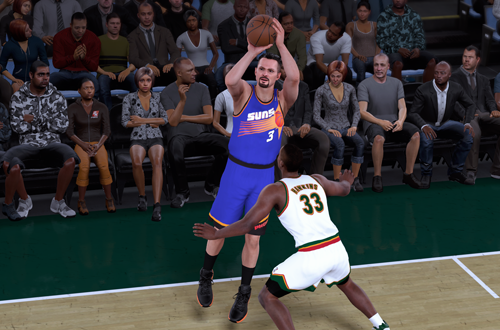 This is another situation where I’d like to see a team from a general era represented among NBA 2K’s retro teams, and there are a couple of viable options in back-to-back seasons. Obviously some of the most interesting historical Phoenix Suns teams are the ones that featured Charles Barkley, and I’d still like to see him in the game along with the 1993 squad. That seems unlikely to happen anytime soon (and I’ve already had them on a previous list anyway), but as it happens the Suns teams from the two years immediately following Sir Charles’ departure are interesting in their own right. I’d nominate either one of them to join the other retro teams from the late 90s.

First, let’s consider the 1997 team that had Kevin Johnson, Jason Kidd, and Steve Nash on the roster. None were in their prime, but that’s still a fine rotation at point guard. Rex Chapman’s heroics helped them push the defending Western Conference Champion Seattle SuperSonics to five games in the Playoffs, a feat that seemed quite unlikely after their 0-8 start. Danny Manning, Wesley Person, Hot Rod Williams, and Cedric Ceballos were also among their key players. The 1998 team swapped Ceballos for Dennis Scott, and added Antonio McDyess, George McCloud, and Cliff Robinson. Winning 56 games but losing in the first round, they’d be a good choice as well. 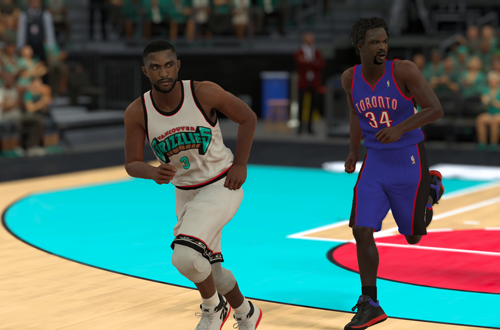 Normally a squad that won less than 30 games and missed the Playoffs wouldn’t be an ideal choice for the selection of retro teams in NBA 2K, but as we get more creative with our ideas, the door is open to a team like the 2000 Vancouver Grizzlies. At the time, they were the most successful Grizzlies team to date – which admittedly isn’t saying much – and it was the last year that they wore their original uniforms. I don’t care what anyone says: those jerseys are still among my favourite designs, at least as far as uniforms that a lot of other fans dislike and often rank among the worst. I’d love to have a Grizzlies squad that sported them as one of NBA 2K’s retro teams.

Alright, so I’m a sucker for those old jerseys, but what about the players? Well, that Grizzlies team that improved to a 22-60 record did have a few players on their roster that you might remember. Bryant “Big Country” Reeves was in the second-to-last season of his brief career, though the team’s first ever Draft pick had been surpassed by Shareef Abdur-Rahim and Mike Bibby as the franchise’s cornerstone players. With Steve Francis forcing a trade to the Houston Rockets after they drafted him, they also had Othella Harrington and Brent Price. Dennis Scott, Michael Dickerson, Antoine Carr, Grant Long, Doug West, and Cherokee Parks rounded out their lineup. 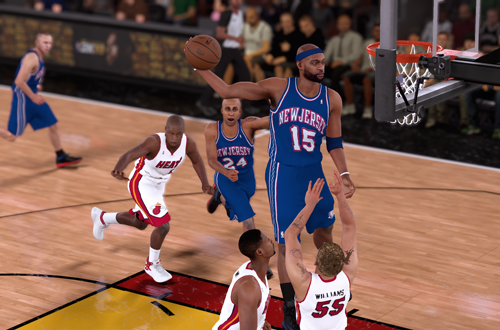 I’m actually surprised that this squad isn’t already among the retro teams in NBA 2K. Although Vince Carter tends to be associated with the Toronto Raptors given that it’s where he began his career, had respectable success over the course of six and a half seasons, and of course won the Slam Dunk Contest, his second longest tenure came with the New Jersey Nets. It was there that he formed a memorable trio with Jason Kidd and Richard Jefferson. Their most successful season together came in 2006, where they went 49-33 to top the Atlantic Division, ultimately making it to the second round of the Playoffs where they lost to the Indiana Pacers in six games.

Those three players are obviously the main attraction for what turned out to be one of the last moderately successful Nets teams before the move to Brooklyn, but they had a few other names of interest, too. Cliff Robinson, the 1993 Sixth Man of the Year, still managed to fill that role admirably at the age of 40. Nenad Krstic was coming into his own as a regular starter, and was still a year away from the knee injury that derailed his NBA career. Other names that should be recognisable to long-time fans include Jacque Vaughn, Jason Collins, and Lamond Murray. They’d be a fun match-up for the other retro teams from the 2006 season that are already featured in NBA 2K.

How do you feel about including any of these retro teams in future versions of NBA 2K? What are some other retro teams that you’d like to see? Have your say in the comments section below, and as always, feel free to take the discussion to the NLSC Forum! That’s all for this week, so thanks for checking in, have a great weekend, and please join me again next Friday for another Five.

The losers Grizzlies are admittedly not a big thing, except the goal to take over that Canadian market) New Jersey is a strong point, though. I lovely remind these days, when I was reading in my country’s biggest sports newspaper “Pressball” about feats of the Air Canada (a row of triple doubles with 40+ points), mass Kidd’s 15+ – 10 – 10 hit strikes. They were often combined 3doubles in a given match together! 😉

The 2000 Grizzlies are definitely my out-of-the-box suggestion for this instalment in the series. At this point, I’m trying to think of some creative suggestions outside the usual candidates!

I always go online and choose the all-time Nets and run Kidd, Carter and Jefferson and pretend it’s the ’06 Nets.

They’d be fun to run with!