Welcome to this week’s edition of The Friday Five! The Friday Five is a feature that I post every Friday in which I give my thoughts on a topic that’s related to NBA Live, NBA 2K, and other basketball video games, as well as the real NBA, and other areas of interest to our community. The feature is presented as either a list of five items, or in the form of a Top 5 countdown. This week’s Five is part eight in a series of lists of retro teams that I’d like to see added to NBA 2K.

It’s been six months since my last five suggestions for retro teams that I’d like to see added in future NBA 2K games. I’ve covered a lot of obvious squads among the 35 mentioned so far, but new suggestions still spring to mind. As I noted in my previous articles, some of the retro teams that have been added in recent years have opened the door for more unorthodox choices. Past champions, their opponents, and other teams that had a significant amount of success are always candidates for inclusion, but there are also less distinguished squads that are interesting for other reasons.

Whatever it is that made them interesting and significant in their own right, they strike me as being fun teams to play with in NBA 2K. Once again, these suggestions do not override the squads I mentioned in previous parts of this series; they’re all retro teams that I believe would be great additions to NBA 2K’s roster of historical content. Also, these lists are based on the idea that the necessary players can be licensed, assuming of course that they aren’t in the game already. It would be rather pointless to add these teams if the major players aren’t represented, after all. With that being said, here are my latest suggestions for additional retro teams! 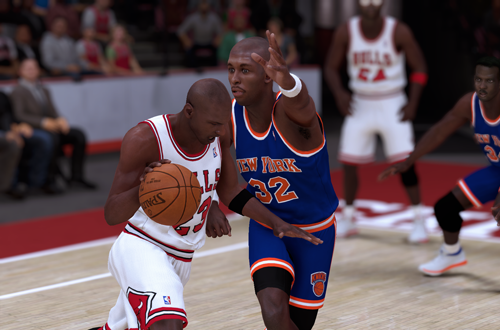 As many long-suffering New York Knicks fans will attest, the team’s fortunes just haven’t been the same since Patrick Ewing was traded. There have been flashes of brilliance and promise, but hopes have been dashed just as quickly; something that I can relate to as a Chicago Bulls fan. Our teams haven’t had long periods of success since the 90s, and while two significant Knicks teams from that decade are already among the retro teams in NBA 2K, there is another that comes to mind: the 1992 team. Led by Pat Riley in his return to the NBA sidelines after last coaching the Los Angeles Lakers in 1990, they improved by twelve wins to go 51-31 on the year.

Those Knicks were a very different team to the Showtime Lakers that Pat Riley had previously helmed. They weren’t flashy, but they were incredibly tough. With the imposing frontline of Patrick Ewing, Charles Oakley, and Xavier McDaniel – who recently appeared on the In All Airness podcast – they beat up on the Bulls and took them to seven games in the second round. Other noteworthy names include John Starks, Kiki Vandeweghe, Anthony Mason, Mark Jackson, Greg Anthony, and Gerald Wilkins. This was the squad that pushed the Bulls-Knicks rivalry into high gear, and they’d be a fun match-up for the early 90s retro teams that are already in the game. 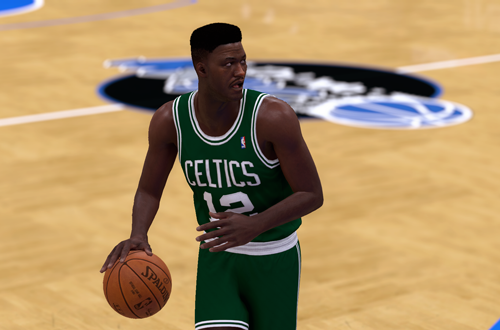 I mentioned my fascination with teams that feature Hall of Fame players in different uniforms back in Part 3 of this series, noting that it definitely inspires some of my unorthodox suggestions for new retro teams. It comes down to the unusual sight of great players wearing jerseys of teams we don’t usually associate them with, and the interesting and often-forgotten stints with clubs that serve as footnotes to their careers. After Hawks legend Dominique Wilkins was traded from Atlanta to the Los Angeles Clippers in 1994, he had one year stints with the Boston Celtics, San Antonio Spurs, and Orlando Magic, in between playing in Greece and Italy.

Nique’s stints with the Clippers, Spurs, and Magic are all interesting ideas in their own right, but it’s the 1995 Boston team that he was a part of that I believe would be a fun inclusion among NBA 2K’s retro teams. It was far from his best year individually, but it did result in the odd visual of him wearing number 12, instead of his usual 21. Other players on that squad include Xavier McDaniel, Dee Brown, Dino Radja, Rick Fox, David Wesley, Pervis Ellison, and Sherman Douglas. Notably, it’s the last season that the Celtics played in the original Boston Garden, and in the Playoffs, they faced a team that’s already in 2K: the Magic with Shaquille O’Neal and Anfernee Hardaway. 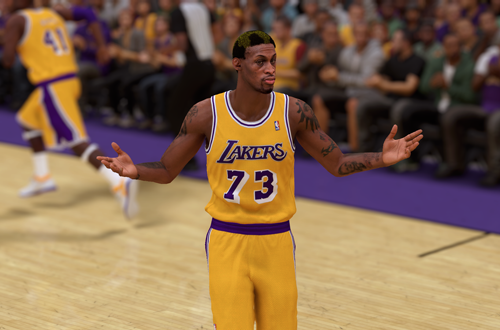 A couple of weeks ago, I mentioned the lockout-shortened 1999 season as one that I’m oddly nostalgic for. I cited the number of players moving around as a major factor in that, and yes, part of that is seeing big names in unfamiliar places. The ’99 Houston Rockets with Hakeem Olajuwon, Charles Barkley, and Scottie Pippen is a squad that I included on a previous list, and when it comes to noteworthy trios that formed during that season, there’s another one that comes to mind: Shaquille O’Neal, Kobe Bryant, and Dennis Rodman. The Worm’s signing provided us with the spectacle of Pippen and the Rockets versus Rodman and the Lakers, while Michael Jordan watched.

There is a potential problem here as technically, it would be including the Lakers from a specific stretch of the 1999 season, rather than their final roster. Rodman was signed on February 23rd, almost three weeks into the season, and then cut on April 16th, a little under a month before the Playoffs began. That was the last move that the Lakers made before the 1999 Draft, though, so a squad featuring Rodman is close to being their final lineup for the year. The trio were joined by Glen Rice (acquired at the deadline for Eddie Jones), Derek Fisher, Rick Fox, Robert Horry, and Derek Harper, with the first four of those players being part of the 2000 championship team. 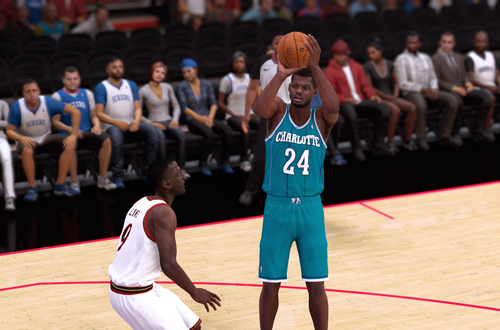 Eddie Jones would spend just one full season with the Hornets before they traded him to the Miami Heat along with Anthony Mason, Dale Ellis, and Ricky Davis for Jamal Mashburn, P.J. Brown, Otis Thorpe, Rodney Buford, and Tim James. It was a trade that seemed to work out for both parties, as Jones helped the Heat to another 50-win season despite Alonzo Mourning missing most of the year due to illness. Mashburn once again found himself the number one option, leading the Hornets to the Playoffs where – as fate would have it – they swept the Heat in the first round. They went on to lose to Ray Allen’s Milwaukee Bucks in a competitive seven game series.

You could probably argue for the 2001 Heat’s inclusion here, as they did have a rather interesting squad in their own right. Along with Jones, Davis, and Mourning, there was Tim Hardaway, Anthony Mason (a first-time All-Star that year), A.C. Green, Dan Majerle, Cedric Ceballos, Brian Grant, Don MacLean, and Bruce Bowen. Meanwhile, in addition to Mashburn, Brown, and Thorpe, those Hornets had Baron Davis, Derrick Coleman, Jamaal Magloire, Elden Campbell, Hersey Hawkins, and David Wesley. Incredibly, none of their starters missed more than six games, giving them one of the league’s most consistent lineups on route to their 46 wins and respectable Playoff run. 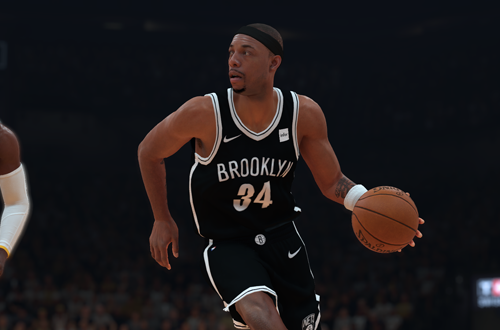 Quite a few teams in recent years are reminiscent of squads assembled in the franchise mode of a basketball video game: stacked with talent, as if the CPU has been taken advantage of time and time again. Teams like the Golden State Warriors and a couple of LeBron James-led Cleveland Cavaliers teams have found great success filling their rosters with current and former All-Stars, but one team that wasn’t so successful was the 2014 Brooklyn Nets. Mikhail Prokhorov made it clear that he was willing to spend big in an attempt to win big, and with the Celtics looking to rebuild, the Nets acquired Kevin Garnett, Paul Pierce, and Jason Terry for Gerald Wallace and spare parts.

That Nets team already featured Joe Johnson, Brook Lopez, and Deron Williams, all of whom had been All-Stars (with Johnson being picked again in 2014). As if that wasn’t enough, they signed Andrei Kirilenko and Shaun Livingston, giving them an extraordinarily deep roster. Granted, most of those players had peaked or were well past their prime, which on top of an injury to Lopez, saw them go 44-38. Regardless, with a freshly retired Jason Kidd in his first year as a head coach, they made it to the second round where they lost to LeBron and the Heat. They’d be fun to play with on the virtual hardwood, and as it was five years ago now, I’d say they’re old enough.

What other retro teams would you like to see added in future NBA 2K games? Do any of the squads that I’ve listed here appeal to you? Have your say in the comments below, and as always, feel free to take the discussion to the NLSC Forum! That’s all for this week, so thanks for checking in, have a great weekend, and please join me again next Friday for another Five.

Bro you already got the 1992 Knicks on my retro roster! Haha! They have won the title a couple of times during some simulations. THAT was a great Knicks team! That team was a legit 9 guys deep.

This is true! Mods have obviously been great for expanding the content that’s already in the game, not to mention create brand new experiences with full season and total conversion mods. It’d be great to have more teams in there by default though, and of course, it would be more assets for modders to work with.

And yes, I do love the idea of the 1995 Celtics as well. It’s a team, while they weren’t going to win a championship, that was very video-game-good. Video-game-good meaning, you could probably win a title with them in a myleague today because of Nique and Dino. They had a little support help with Brown and Fox too. Anyway…

That’s the great thing about the unorthodox additions in recent NBA 2K games. Some of them aren’t that historically significant, except perhaps to the franchise in question, but they’re interesting and have rosters that are fun to play with. With so many obvious choices already included when it comes to past champions and their rivals, as I said, the door is open for some interesting ideas!