Welcome to this week’s edition of The Friday Five! The Friday Five is a feature that I post every Friday in which I give my thoughts on a topic that’s related to NBA Live, NBA 2K, and other basketball video games, as well as the real NBA, and other areas of interest to our community. The feature is presented as either a list of five items, or in the form of a Top 5 countdown. This week’s Five is a list of five small ways that basketball games have gone that extra mile in their details.

The small details in basketball video games are a funny thing. It’s possible to obsess over them too much, to the point of nitpicking. Nothing makes us appear to be an unpleasable fanbase quite like overreacting to a minor error or missing detail that most people would never notice, and hardly ruins the entire game. At the same time, attention to detail is important, and we do notice when games go that extra mile in order to be fun and immersive. Even if it’s purely cosmetic, we’re likely to say “hey, that’s awesome” once we’ve seen it.

It may be a detail that we can barely see during gameplay, but it adds authenticity that we can appreciate when replays take us closer to the action. It may be functionality that improves the quality of the experience, or contributes to the atmosphere. In some cases, it may even be content that gets patched in, adding a level of detail that we didn’t expect. Whatever the case may be, the developers went that extra mile to make the game better in small ways. I’m sure we all have our favourite examples of little details that impressed us when we discovered them, and so today I’m sharing five of mine, in no particular order. Hats off to the developers for these efforts! 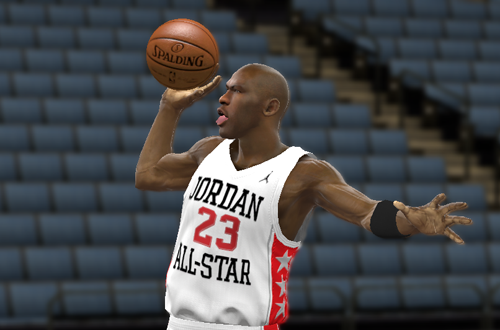 Although NBA 2K11 wasn’t the first game to include historical content, the addition of The Jordan Challenge blew us away. The ability to replay milestone games from Michael Jordan’s legendary career – complete with special animations to re-create memorable moments – was so much fun. In fact, it was so engaging that you don’t really notice at first glance that most of the teams only have five players. NBA 2K12 took things to the next level with NBA’s Greatest, celebrating the careers of 15 all-time greats. Since then, we’ve lost some teams and players, gained some new ones, and been without a challenge mode, but one thing has remained: MJ’s tongue.

Since NBA 2K11, His Airness has wagged his trademark tongue upon rising up for his signature slams. It’s a unique facial animation that goes that extra mile in making MJ look like MJ. What I enjoy about it in particular is that adding Michael Jordan to the game complete with animated tongue is something that we always used to ask for in our Wishlists for NBA Live. An inability to license MJ kept him out of the games until NBA Live 2000, and a decent-looking tongue animation likely wasn’t feasible besides. NBA 2K11 finally made it happen though, and it stands as an example of the kind of detail the developers can and will add when they’re able to go that extra mile. 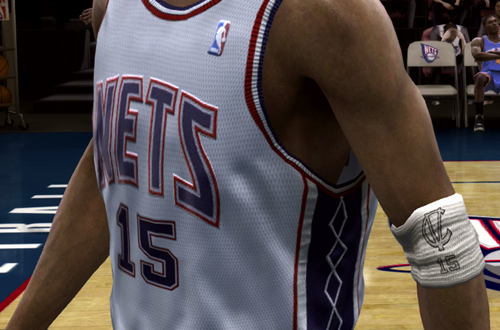 I’m combining two impressive details concerning player accessories for this example. When player accessories – arm bands, knee braces, headbands, etc – became standard in basketball video games, it was a welcome visual improvement. The ability for players to wear custom bands has existed since the early 2000s, and it’s something that we utilised in various mods. Around the mid 2000s, we started seeing more signature accessories in the games by default. The first few NBA Live games on Xbox 360 weren’t well-received, but they do have some impressive little details, such as well-made signature arm bands for players like Vince Carter and Paul Pierce.

There’s also a nifty setting related to accessories in recent NBA 2K games that you may not know about, or have perhaps forgotten. When assigning accessories to a player, you can choose how often they’ll wear them, thus accounting for players who may only wear a certain accessory every now and then, as well as players who wear their chosen accessories all of the time. NBA 2K would hardly be ruined without this feature, but including it goes that extra mile in representing a player’s habits as far as their uniform and gear. It’s very easy to overlook, but once you notice that a player is changing up their accessories as they do in real life, it’s something that you appreciate. 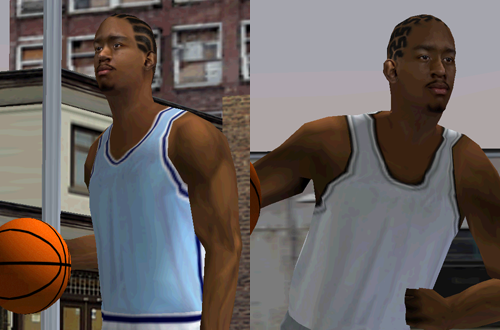 Ironically, this is something that we’ve seen less of as basketball games have become more sophisticated. As early as the mid 90s, certain players in basketball games had alternating hairstyles. Dennis Rodman is a classic example here. In arcade titles such as NBA Hangtime, it was possible to switch his hair colour with a button press on the team selection screen. In sim games such as NBA Live, he had a unique head with different hair colours that were chosen at random, and had a matching portrait. When the games adopted proper face textures – cyberfaces, as they came to be called – he had a handful of textures that would likewise be chosen at random for each game.

Other players would also benefit from the games supporting multiple face textures. In NBA Live 2000, Allen Iverson and Ben Wallace each had a second face sporting a different style of cornrows. The same method was also used to alternate headbands for some players. Chris Gatling had a few different face textures in NBA Live 2000, each with a different coloured headband. Wilt Chamberlain likewise has two faces with different headbands, and a third face without one. As I noted, despite making several advances over the years, this is something that basketball games don’t seem to do anymore. It’s impressive that they went that extra mile back in the day, though. 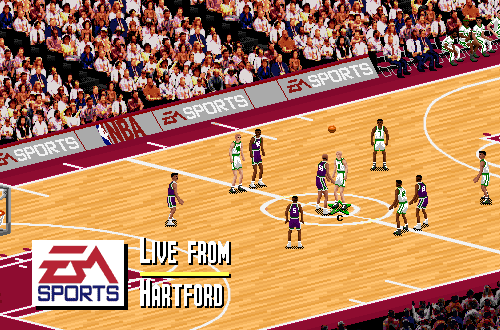 Here’s a detail that you may have never seen, even if you’re an old school basketball gamer. There was a time when certain teams played a handful of home games in a second stadium/arena, such as the Boston Celtics hosting the occasional contest in the Hartford Civic Center (now the XL Center). These games were actually accounted for in NBA Live 95’s Season mode, and took place on a generic court rather than the usual home floor. The catch is that if you weren’t playing a Season with a team that had an alternate venue – or as one of their opponents for those games – you’d likely never see that the game had gone the extra mile to account for the change in location.

This actually led to a bug in NBA Live 96 PC that I vaguely recalled offhand many years later, and confirmed in a Wayback Wednesday feature. At the time, the Los Angeles Clippers played a handful of their games at the Arrowhead Pond located in Anaheim. Instead of the generic court used for alternate venues in NBA Live 95, the Anaheim games took place on the Vancouver Grizzlies’ court. The same error occurs for Washington Bullets games held in Baltimore rather than Landover. Either the Grizzlies’ court was incorrectly assigned, or the generic court is missing and the game defaults to Vancouver – where NBA Live 96 was developed – to avoid a crash. 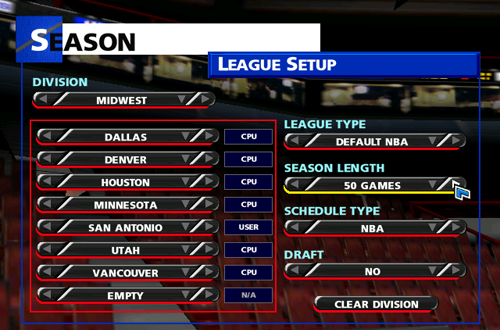 No one enjoyed the lockouts that resulted in regular season games being lost (or so I would assume), but in hindsight, they were inevitable steps towards finally achieving a mutually satisfactory collective bargaining agreement. Nevertheless, they were frustrating while they lasted, and they also had an impact on the NBA video games released in 1998 and 2011. The original 1999 and 2012 season schedules included in those titles obviously never came to pass, and the games had to launch with previous season rosters. NBA Live 99 PC would receive a roster update once the season finally began – console gamers were out of luck then – as did all versions of NBA 2K12.

That’s not all the developers added to the PC version of NBA Live 99, though. They went the extra mile and added the abbreviated 50-game schedule for the 1999 season. Not only that, but since NBA Live 99 was the first year that the game included multi-season play, if you selected the 50-game schedule upon starting a new Season game, the schedule reverted to the normal 82 games for the 2000 campaign and beyond! It was more than they needed to do, and for that matter, more than 2K managed with NBA 2K12 (or NBA 2K21, once the proper schedule was released and the 2021 season tipped off). It’s an underrated post-release addition for a late 90s title.

What are some of the details that have impressed you as far as basketball video game developers going that extra mile? What are the small ways they can make a title even better in your eyes? Have your say in the comments, and as always, feel free to take the discussion to the NLSC Forum! That’s all for this week, so thanks for checking in, have a great weekend, and please join me again next Friday for another Five.