Welcome to this week’s edition of The Friday Five! The Friday Five is a feature that I post every Friday in which I give my thoughts on a topic that’s related to NBA Live, NBA 2K, and other basketball video games, as well as the real NBA, and other areas of interest to our community. The feature is presented as either a list of five items, or in the form of a Top 5 countdown. This week’s Five is a list of five things that would enhance MyCOURT in NBA 2K’s MyCAREER.

As I noted in a Wayback Wednesday feature, when MyCOURT was first announced as a new addition in NBA 2K15’s MyCAREER, I didn’t think much of it. My initial thought was that it sounded like a gimmicky premise, another case of adding flash over substance. In hindsight, I was underestimating its usefulness. MyCOURT has not only proven to be an appealing player hub and base of operations for MyCAREER, but is very handy for testing out animations, getting a feel for your player, and earning some extra VC. In NBA 2K17, it could even be used to grind for Cap Breakers.

However, while MyCOURT remains practical and stylish as of NBA 2K19, there are a few things that could stand to be improved upon. Although new functions have been added in the form of mini-games and unlockable items, there are some noteworthy omissions in terms of useful options and equipment. From additional on-court options to menu functions and interactive elements of the environment, these things would allow us to get the most out of MyCOURT. They may not be the most crucial parts of MyCAREER, but having spent considerable time in the mode in NBA 2K19, I feel that these suggestions would spruce up our own private virtual hardwood. 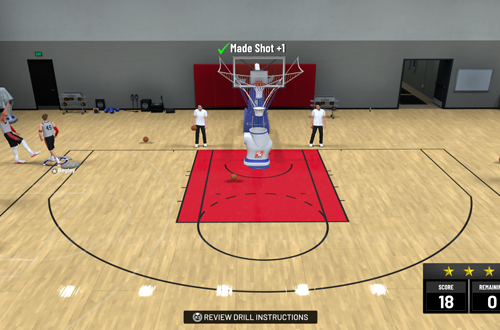 The absence of this particular piece of useful equipment was noted in a thread over on Reddit. I hadn’t really thought about it until I saw it mentioned, but since it came up, it’s a suggestion that I completely agree with. In short, it should be possible to acquire a ball return machine for practicing shots on your MyCOURT. Sure, there’s already a free shootaround mode and it’s better than nothing as far as working on your jumper, but as noted in the aforementioned thread, it is a hassle having to chase down the ball after an attempt, make or miss. If you want to practice shooting from a particular spot, a ball return machine – like the one utilised in training drills – would be very helpful.

This is something that should be unlocked automatically on the Road to 99, preferably around the 80-85 Overall mark. A player of that stature would probably be able to get their hands on a ball return machine for their own private court, and I would suggest by that point, you’ve earned (or bought) enough VC to warrant one as a reward. An alternative would be to bring back spot shooting drills as in NBA 2K17’s shootaround, or perhaps allow Spinelli the Doorman to come up and rebound for you. He does offer to do so in his introductory cutscene, and that would make for an amusing feature. A ball return machine would be great though, and far more useful than a Beats Machine. 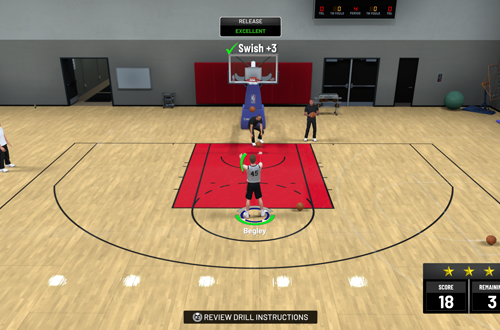 In the early stages of my first seasons in MyCAREER, I find myself struggling to hit free throws. Due to MyCAREER’s infamously low starting ratings, my free throw attribute is ridiculously low for a shooter Archetype. The situation has only gotten worse now that the traditional free throw rating has been removed from MyCAREER, replaced by the Free Throw Ace Badge. I’d advocate for a return to the old rating, but whichever system is in place for improving our abilities at the line, we need to be able to practice the mechanics on the sticks and learn our animation. To that end, we must be able to freely practice free throws in the comfort of our MyCOURT.

Obviously there is a free throw drill in team practice, but it has its limitations. With a limit of four drills per training session, and no facility to practice free throws without grinding for MyPOINTS at the same time, our opportunities to sharpen our skills are quite restricted. Now, I believe that if any rating should be open to unlimited grinding through MyCOURT, it should be the free throw attribute. If that’s too cheesy though, I’d propose being able to practice free throws at any time on your MyCOURT, with only one session yielding MyPOINTS until you play your next game. If you just want to practice the release point, there should be no restrictions.

3. Zoom In on Trophy Case 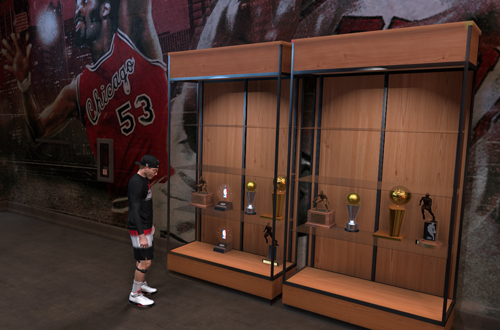 Let’s put aside gameplay-related improvements for MyCOURT, and talk about the aesthetics for a moment. Having played through a couple of seasons of MyCAREER in NBA 2K19 and collected some hardware, I miss the ability to inspect the contents of the trophy case. It’s great that they still appear there and that the shelves fill up as you add more trophies to your collection, but I miss being able to zoom in for a closer look at them. I liked NBA 2K17’s approach here, not only being able to zoom in on the trophies that you’d won, but also getting Player of the Game, Week, and Month plaques to display in your MyCOURT. Of course, the walls did fill up rather quickly!

I’d also suggest being able to inspect the framed jerseys on your MyCOURT, which you could also do back in NBA 2K17 once you started collecting them. While there’s no tangible benefit in being able to do this, it’s something that allows you to enjoy the items that are on display by getting a good look at them up close. If there needs to be a more tangible use, perhaps viewing the trophies could also be a shortcut to bring up the award histories, and NBA trivia could pop up when you view the framed jerseys. Hand out a small VC reward at random for viewing the items, or have a Trophy and Achievement for doing so, and gamers will be gunning for awards to zoom in on. 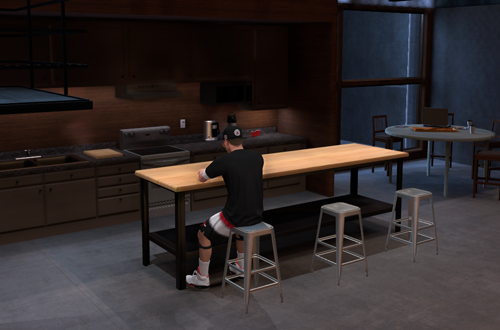 While we’re talking about things that aren’t vital but could nevertheless enhance the experience, there could definitely be more to do outside of shooting around in your MyCOURT. If 2K is serious about expanding the RPG elements of MyCAREER and the open world feel of The Neighborhood, then adding more things to interact with in MyCOURT would make it more fun and engaging. As it stands, there isn’t much we can do except sit on some chairs if we move near them. This produces some amusing animations, such as nodding off and then being startled awake, but they lose their entertainment value once you’ve seen them and they don’t achieve anything.

Thinking about player housing in the Fallout series, as well as other facilities found in MyCAREER, there’s plenty of potential here. Sitting in one of the chairs or on one of the couches could unlock a “well rested” bonus that grants more XP, or restores your boost. Similarly, you could have some equipment of your own that you can use to restore boost without having to leave to go to the gym. Interacting with other areas in your MyCOURT could likewise earn benefits, or just give us a reason to explore. Just don’t bring back the Closet and force us to go back to MyCOURT every time we want to change clothes for The Playground. It was an immersive idea, but too impractical. 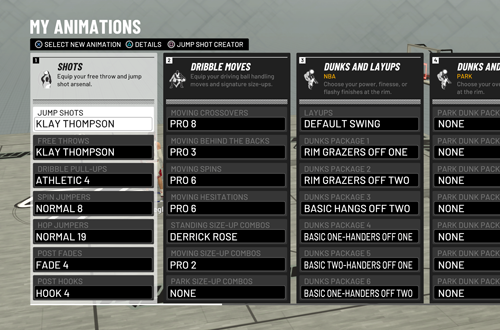 I’m wrapping up this list with a function that was lost when the MyPLAYER menu was revamped in NBA 2K19. Although a couple of improvements were made to the menu this year, there are oddities such as the MyCOURT option showing up when out on the street (where it can’t be accessed) and the Animation Store and My Animations menu being inaccessible in MyCOURT (where you’d want to try the animations that you have in your inventory). Since the main purpose of being able to shoot around on your own court is to get a feel for your player and the animations you’ve picked, a lot of convenience is lost when you have to exit to the street to swap them in and out.

Presumably it was just a matter of oversight, but it is annoying that NBA 2K18’s MyPLAYER Lab allowed us to buy and assign animations in MyCOURT, only for the function to be removed from NBA 2K19’s menus. Something that both games are lacking is the ability to assign gear for NBA games. I understand the approach of having that function in the locker room between games, and it’s good to have one last chance to assign gear before heading out onto the court, but it can also be a hassle, especially when you need to wait for the next home or away game to make changes for one or the other. I’d prefer all those options to be right there in MyCOURT.

With a few additions, MyCOURT could easily become the fun and in-depth player hub that it’s capable of being. MyCAREER gamers, what else would you like to see added to improve MyCOURT? Have your say in the comments section below, and as always, feel free to take the discussion to the NLSC Forum! That’s all for this week, so thanks for checking in, have a great weekend, and please join me again next Friday for another Five.