Welcome to this week’s edition of The Friday Five! The Friday Five is a feature that I post every Friday in which I give my thoughts on a topic that’s related to NBA Live, NBA 2K, and other basketball video games, as well as the real NBA, and other areas of interest to our community. The feature is presented as either a list of five items, or in the form of a Top 5 countdown. This week’s Five is a list of five things that I’ve learned playing in the Jordan Rec Center in NBA 2K19.

Having wrapped up my second season in NBA 2K19’s MyCAREER, I haven’t felt the desire to play a third year. Since the Bulls went out and signed Ben Simmons, I have thought about playing a few games here and there while simulating the rest, but I’ve not done so as yet. I have been playing online however, just to see what the scene is like this late in the year. After several sessions in The Playground and Jordan Rec Center, I’d have to conclude that not much has changed since the game was launched. The gameplay, the user base, the overall vibe and atmosphere…it’s all the same.

The lack of change has come as a disappointment as far as the Jordan Rec Center is concerned. With team Pro-Am hamstrung by the enforcement of five users per side, the Jordan Rec Center became the online mode of choice for the NLSC squad. It soon became apparent that it wasn’t going to deliver the same fun experience that team Pro-Am did for us in NBA 2K16 and NBA 2K17, and to a far lesser extent, NBA 2K18. At this point, I’m the only member of the squad who’s jumping online on a regular basis, so I’ve been playing with randoms. Here’s my take on the Jordan Rec Center after playing it extensively this year, with friends and randoms alike.

1. Too Many Players Can’t Shake the Player One Mindset 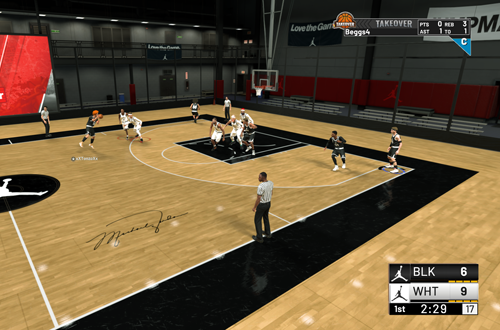 Forget shooting mechanics; playing with randoms online is the real dice roll! The big problem that continues to hamper the Jordan Rec Center experience is the inability, or perhaps unwillingness, to shake the Player One mindset. Ball hogging is a common sight in the JRC, with everyone wanting to get their stats and be the star instead of working as a team. This results in other players taking over ballhandling duties while also taking the most shots; a pet peeve of mine since I like setting people up to score. You’ll also see plenty of heavily contested shots in double and triple teams while the open man is ignored time and time again. In short, a lot of dumb and selfish play.

Now, you can tolerate this kind of play to a point when you’re winning, but all too often, the lack of team play blows leads and ends up in losses. No one likes to lose at the best of times, but it’s beyond frustrating when you don’t even get to touch the ball in the process. These selfish players are often the ones complaining the loudest on the open mic about not getting the ball, or when you mess up. I had one person tell me to stop setting picks, or maybe to stop cherry-picking; I couldn’t catch which. As he was hogging the ball, leaving me little else to do except run up court and try to set some screens, I figured that I’d stop doing both. We lost, but he got his points. Go team! 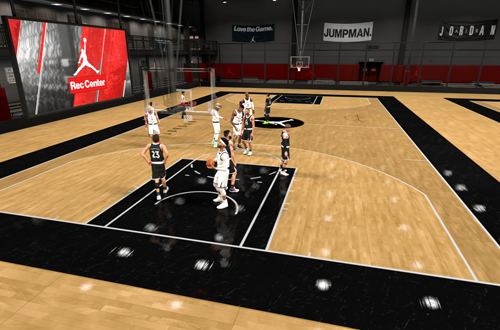 Because there’s a lack of cohesiveness and team spirit in Jordan Rec Center games, it’s difficult to develop any chemistry with the randomly cobbled together lineups. It’s an even harder task when few people are willing to make an effort. A couple of people might be sharing the ball – especially if they happen to be friends who’ve squadded up and headed to the JRC – but everyone else ends up getting frozen out. There’s also a good amount of snobbery and elitism here, as a single missed shot or turnover will result in you never getting the ball again, if they can avoid it. Meanwhile, they’re an ice cold 2/18 from downtown, with seven turnovers by the third quarter.

These freeze outs in turn lead to people becoming ball hogs when they get the chance, or slacking off on defense. That’s understandable as it’s easy to become disheartened if all you’re doing is running back and forth and standing around all game, but there are gamers who take it to the point of sabotage. If they don’t feel they’ve had enough shots or someone makes a mistake, they’ll stop defending, flop for no reason, or force up bad shots. A lot of people will quit after early deficits that can easily be overcome, while teams that are winning big will keep running up the score with cheap strategies right until the very end. To be blunt, we don’t play very nice with each other.

3. Lots of Gamers Have Been Hit by the Minimum User Change 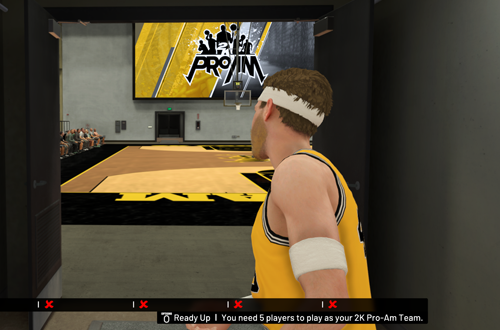 There’s been some pushback on the suggestion to bring back the three user minimum in team Pro-Am, a change that has forced many of us to use the Jordan Rec Center for our online team play fix. I understand the desire to make Pro-Am the “home version” of the NBA 2K League by keeping AI players out of the experience, but frankly, it’s turned into gatekeeping. Judging by the usernames I’ve seen in the Jordan Rec Center that I recognise from playing team Pro-Am in previous years, it’s not just the NLSC squad that’s been hit by the change. The situation may not be as dire in North America as it is the Australasian region, but the approach is locking gamers out of the mode.

I’m sure this won’t be the last time that I explain the position that I and other gamers have on this matter, but here goes. It’s not that we want to play against AI opponents, so kindly cut the “play MyCAREER if you want to play against the CPU!” nonsense. We’d also rather have five users a side whenever possible, but when it isn’t possible for whatever reason, we’d like the opportunity to still get a game in against others who don’t mind when an AI or two fills in. And yes, the JRC is intended for gamers who don’t have a full squad, but it’s not appealing or viable right now. What we really need are deeper matchmaking options that cater to everyone’s preferences regarding AIs.

4. Online Gameplay is in Serious Decline 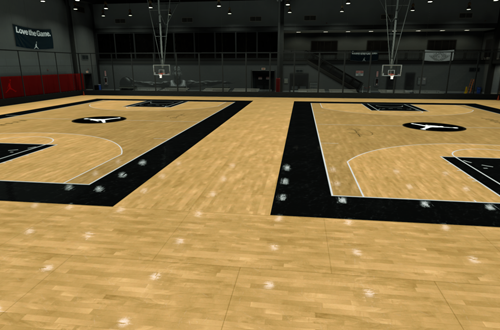 This is something that also applies to The Playground and team Pro-Am, but as I’ve mostly played Jordan Rec Center games this year, that’s where I’ve been able to make these observations. Online gameplay has continued to decline in NBA 2K19, at least for anyone who prefers a more realistic, balanced, and cheese-free style of gameplay. The new Takeover mechanic rivals Freestyle Superstars in being overpowered, and makes certain Archetypes incredibly cheesy. It doesn’t help that a lot of Archetypes are broken to begin with, with a handful of viable choices that are ridiculously OP. Pick the wrong one, or choose the wrong animations, and you’re at a disadvantage.

Unfortunately, online gameplay is now less about good basketball strategy, and more about meta-gaming. Obviously different builds are going to have their strengths and weaknesses, but when it comes down to picking the right one from a select few, min-maxing with the physical attributes, choosing the most viable shooting form, and even making your player left-handed, meta-gaming has gone too far. Shooting Badges tend to be OP, as are defensive Badges for Lockdown builds, who can already force way too many turnovers by spamming Steal. Unfortunately, 2K seems disinterested in addressing the online balance, and I don’t have high hopes that it’s going to improve.

5. Jordan Rec Center is no Substitute for Team Pro-Am 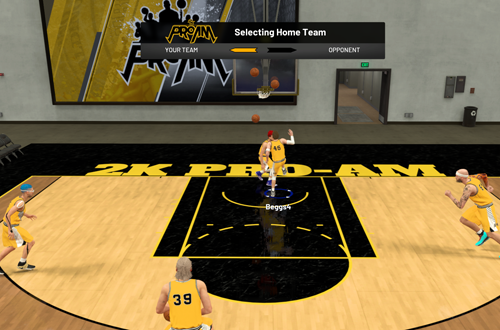 At the end of the day, trying to get an online team play fix from the Jordan Rec Center has led to a lot of frustration and disappointment. It’s a poor substitute for team Pro-Am, offering up a sloppier style of play and discouraging atmosphere due to too many gamers who are selfish, poor sports, or both, with nothing apart from a broken grading system to dissuade them. I have had some fun games in the Jordan Rec Center, which is why I’m still jumping on every now and again, but they’re few and far between. By implementing the five users a side requirement and forcing gamers to the JRC, NBA 2K19 has shunted us into an inferior and frustrating alternative to team Pro-Am.

I expect that I’ll return to franchise gaming this year, as I’ve reached all of my goals in MyCAREER and no longer feel enthusiastic about grinding up yet another player for an online experience that isn’t as appealing as it once was. However, I do have some suggestions. Remove the need for five users in team Pro-Am, and add matchmaking options that allow gamers to specify whether or not they want to play against AIs. Also, balance gameplay and Archetypes for an optimal competitive experience. From a community perspective, we need to cut down on the toxicity, be good sports and teammates, and remember that when we jump online, we cease to be Player One.

Have you been playing in the Jordan Rec Center in NBA 2K19? If so, is it because of the changes to team Pro-Am, and what have your experiences been like? Have your say in the comments section below, and as always, feel free to take the discussion to the NLSC Forum! That’s all for this week, so thanks for checking in, have a great weekend, and please join me again next Friday for another Five.