Welcome to this week’s edition of The Friday Five! The Friday Five is a feature that I post every Friday in which I give my thoughts on a topic that’s related to NBA Live, NBA 2K, and other basketball video games, as well as the real NBA, and other areas of interest to our community. The feature is presented as either a list of five items, or in the form of a Top 5 countdown. This week’s Five is a list of five things that I’ve stopped doing in my NBA 2K19 MyCAREER games.

I’m at that point of the year where I’m trying to wrap up most of my business with the current games, maybe try a few other things before I’m completely bored of them, and then get ready for the preview season and this year’s releases. I’m more or less done with NBA Live 19 already; although I’m giving it another look in light of the recent patch, I just can’t get hooked on any of the modes. I enjoyed Ultimate Team last year, but NBA Live 19’s approach to the mode hasn’t been to my liking. I’m hoping it’ll be a different story with NBA Live 20.

Conversely, I’m still playing NBA 2K19 quite regularly. Despite my desire to get back to franchise gaming and a feeling of burnout when it came to career modes, I’m still going strong with MyCAREER. In fact, I actually have two careers going: one on PlayStation 4 in which I also play online, and a second one on PC. While I am still enjoying the MyCAREER experience, there are a few things that I’ve stopped doing in the mode. Most of them are admittedly extracurricular, but for several months they were nevertheless part of the MyCAREER grind. That’s in the past though, as for the most part, I’ve taken to shunning the following activities. 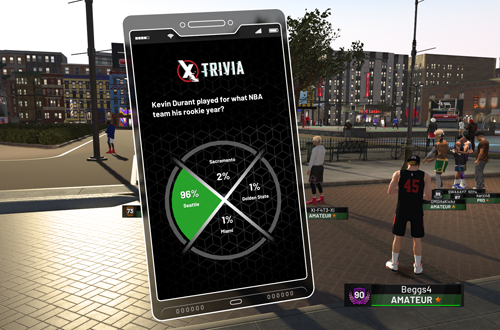 When I was still grinding my way up from 60 Overall, I was doing everything that I could to earn extra VC. I was determined not to spend a cent on VC this year, and I’m proud to say that so far, I’ve kept that promise to myself. There were definitely times that I was tempted though, and as I continually calculated how much VC I’d need to max out at my current cap, the idea of winning the jackpot on the daily trivia was very appealing. To that end, whenever I could, I’d play the trivia game on PlayStation 4 and PC simultaneously. The idea was to win on both platforms, but I could also hedge my bets with different answers when I was stumped and needed to make a guess.

Unfortunately, I never won the jackpot. I came frustratingly close on two occasions, making it through to the tenth question and getting it wrong. One of those times was particularly frustrating as I was one of only a few left, and I blanked on what URL stands for; rather embarrassing for someone who works in IT! Had I gone with my gut feeling, I’d have earned quite a bit of VC for my efforts. It wasn’t to be though, and since I’m at a point where I can easily build up enough VC by the time I hit my next cap breaker, I don’t have much incentive to keep trying. Playing trivia was something I did as often as I could, but now it’s something I’ve stopped doing in MyCAREER. 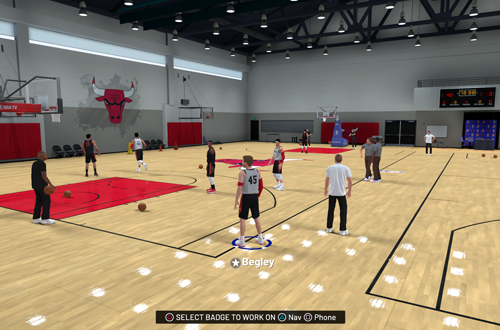 Yes, I’ve adopted an Allen Iverson-like attitude to practice in MyCAREER these days. I suppose it’s only appropriate given the A.I. nickname, but it actually has nothing to do with role-play. I’ve maxed out all of my Badges in my PlayStation 4 MyCAREER game, and my love of assists combined with a good record has the team chemistry at 100%. There’s simply no reason to go to practice anymore, or the gym for that matter since I’m 92 Overall and have a permanent boost. I’ll go every once in a while when I feel like killing some time with one of the drills, and I’d go far more often if it helped with cap breakers. Unfortunately, the MyPOINTS don’t scale.

This habit has become problematic on PC, however. I’m still an 89 Overall there, and haven’t maxed out all my Badges. I’m working towards the cap breaker for 90 Overall, which I’d like to do in order to pick up the Steam Achievement. As noted, at a certain point the amount of MyPOINTS you get from four three-star drills won’t have enough of an impact on cap breaker progress, but I’ve definitely thrown away opportunities to grind here and there because I’ve grown used to skipping practice after maxing out all my Badges on PS4. Not needing to practice does make the season go faster, but it’d be nice to have some incentive to keep utilising the team facilities. 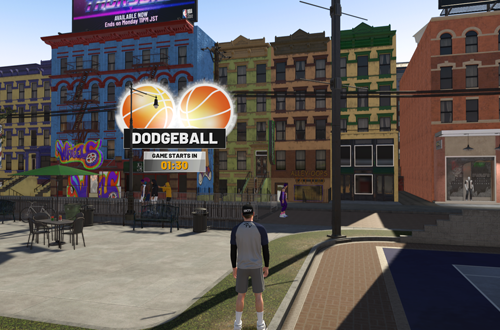 I wouldn’t call myself a hardcore completionist or Trophy/Achievement hunter, but I do like to go after them to some extent. To me, it’s a good way of getting the most out of a game, trying out a few things I might normally overlook, and take on some fun challenges. Playing through MyCAREER on both PlayStation 4 and PC this year, I have managed to pick up a considerable amount of PlayStation Trophies and Steam Achievements. In addition to the enjoyment of playing the games, it’s been fulfilling. One that I have given up on is “The 5 D’s”, which is awarded for winning a round of dodgeball in The Neighborhood.

Look, I’ve given it a few tries, and it’s just not happening. I’ve had a couple of decent runs on PS4, lasting until the final three or so, but that’s the best I can do. The controls are quite clunky to say the least, so it’s not a lot of fun. As for PC, forget about it. I’ve already discussed the issue of encountering ghost town after ghost town as far as The Neighborhood on PC is concerned, and every time I’ve tried to join in a dodgeball game on the platform, it ends up being cancelled due to a lack of participants. So, yeah, I’ve given up on it. Consider it an honorary entry in my list of the five toughest Achievements/Trophies in basketball video games. 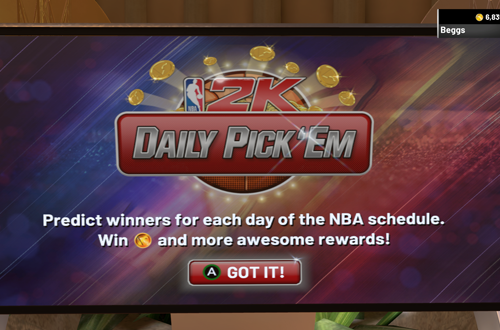 In all fairness, with the 2019 season winding down and only two teams left standing, the Daily Pick ‘Em is no longer a good daily source of bonus VC. With that being said, the feature has been broken since the first round of the 2019 Playoffs. It’s still running through the results from the latter stages of the first round and hasn’t awarded any VC since then, even though it’s allowed further picks to be made. Again, I’m at a point in MyCAREER on both PS4 and PC where VC isn’t really an issue (and there are other ways to earn extra VC besides), but since I do still spin the prize wheel, I’d likely make the picks while in the room if Pick ‘Em was working. It isn’t, so I don’t.

There was a similar problem earlier on in the season where Daily Pick ‘Em stopped working, and it was at least a few weeks (if not longer) before it was fixed. This has become an unfortunate trend with 2K: they’ve very quick to patch out VC exploits, which is understandable, but then they drag their feet fixing any issues that cause gamers to miss out on VC. It’s great they added more ways of earning extra VC in NBA 2K19, especially after their greedy approach in NBA 2K18, but it’s an empty gesture when those methods aren’t working. As I said though, it is late in the season and I’m not hard up for VC, so I’d probably be less diligent in making picks anyway.

5. Watching Cutscenes (With Some Exceptions) 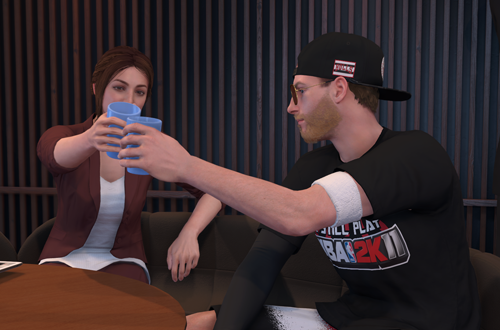 Speaking of great additions in NBA 2K19’s MyCAREER, the ability to skip pretty much any cutscene was most welcome. There are still a few that you can’t skip, and if you don’t get the split screen during the post-game interview with Shaq, it won’t let you skip the scene as you normally can. That’s rather annoying as after a while, you’ll get the same interview over and over. At this point I’ll skip it whenever I can, since I’ve already got maxed out teammate chemistry, I’ve hit 35 million fans to become the most popular player in the NBA, and again, I’m just bored of seeing the same scene time and time again. Sometimes, deep presentation has its drawbacks.

As I said, there are exceptions. Seeing as how I’m in my second season, I’m past most of the story-based cutscenes, but I will watch those as they’re something different. The same goes for any post-game interviews with David Aldridge after breaking a record as it is really cool that they account for that, and of course, I’m still hoping to see the Hall of Fame cutscene at some point. I’ll also watch championship presentations, and I did get into the All-Star spirit with those introductions. Apart from that, however, I’m done. Starting lineups, checking in with David Aldridge before the games, and any other scenes; I’m skipping them. They just slow everything down at this point.

MyCAREER gamers, when did you stop doing these things (if indeed you did them in the first place)? Is there anything else within the MyCAREER experience that you’ve given up on, while still playing the games themselves? Let me know in the comments section below, and as always, feel free to take the discussion to the NLSC Forum! That’s all for this week, so thanks for checking in, have a great weekend, and please join me again next Friday for another Five.