The Friday Five: 5 Things You’re Too Late To Get

Welcome to this week’s edition of The Friday Five! The Friday Five is a feature that I post every Friday in which I give my thoughts on a topic that’s related to NBA Live, NBA 2K, and other basketball video games, as well as the real NBA, and other areas of interest to our community. The feature is presented as either a list of five items, or in the form of a Top 5 countdown. This week’s Five is a list of five things in various basketball games that you’re too late to get, if you don’t already have them.

Happy New Year, basketball gamers! Welcome to the start of another year here at the NLSC, and another twelve months of basketball gaming. With another nine months before we see the next NBA 2K game, we can expect to see plenty of content for both the Next Gen and Current Gen versions of NBA 2K21; especially in MyTEAM, as there’s cross-generation progression. Of course, with the new Seasons approach, some rewards are already off the table. If you didn’t level up or finish the challenges by the time the previous Seasons ended, you’re now too late to get those goodies.

That’s not uncommon these days, what with the “games as a service” model that more and more developers are gravitating towards, including Visual Concepts. We’ve seen similar tactics in NBA Live too, albeit mostly with cosmetic items in LIVE Events. Developers are looking to capitalise on FOMO whenever they can, and as much as we may hate to admit it, it’s a highly effective tactic. With that being said, it’s not just new games where we can feel as though we’ve missed out. Certain content, and even full games that were digital-only releases, are now gone forever. These five things are no longer available, so if you want them, then that’s too bad; it’s now far too late. 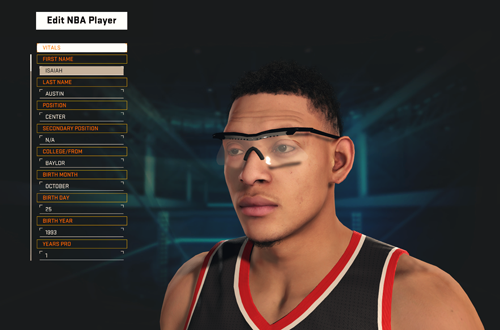 If you don’t remember the story of Isaiah Austin, he was one of the top prospects in 2014, but withdrew his name just days before the Draft when a diagnosis of Marfan syndrome seemingly ended his career. New commissioner Adam Silver invited him to the Draft, where the league chose him with a ceremonial pick between announcing the 15th and 16th selections (Adreian Payne and Jusuf Nurkic, in case you’re wondering). It was an emotional moment, and a class act on the NBA’s part. Austin has since been cleared to play, and after stints in Serbia, China, Taiwan, and Lebanon, he’s currently playing in Mexico. It remains to be seen if he’ll ever actually make it to the NBA.

He did achieve that dream on the virtual hardwood though, as 2K added him to NBA 2K15 in a roster update. If you have the latest roster and content updates for NBA 2K15, you’ll still have Isaiah Austin in your game. However, if you’ve uninstalled NBA 2K15 at some point, or you happen to pick it up for PlayStation 4 or Xbox One now, it’s too late to get him. The server shutdowns for older NBA 2K games don’t prevent the official patches from still coming through, but in-game updates – which include rosters and other such content – are no longer available. I’ve lost Austin on PS4, but I’ve been sure to back up my files on PC to avoid losing him there as well. 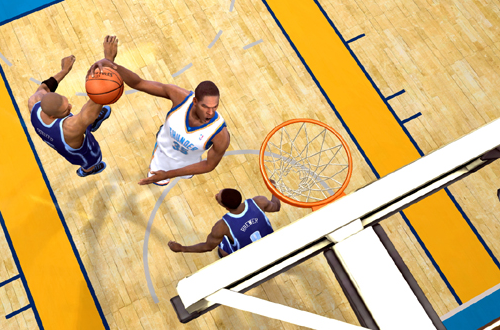 NBA Live 09 was a solid game on Xbox 360 and PlayStation 3, but it was affected by the Seattle SuperSonics’ abrupt move to Oklahoma City, where they of course became the Thunder. The new branding wasn’t revealed in time to be included in either the PlayStation 2 or PS3/360 version of the game, meaning that it had to launch with the placeholder logo, and a generic court and jerseys. The team also used “Oklahoma City” for both its name and location in the roster. There was nothing that could be done for the PlayStation 2 version of the game, but on 360/PS3 there was free DLC that added the Thunder’s court, jerseys and logo (the name in the roster wasn’t fixed).

That DLC is no longer available, which isn’t surprising. It is unfortunate however, as if you didn’t download it at the time, it’s obviously too late to do so now. Anyone that picked it up back then is set, and I believe that you can re-download it as long as it’s on your account – to be honest, I don’t want to take a chance by deleting it – but retro gamers that are checking it out for the first time are sadly out of luck. Now, we have been experimenting with uploading that free DLC and seeing if others can make use of it, but so far, it doesn’t appear to work. If we can find a workaround, then the DLC can be preserved. If not, then it’s definitely too late for anyone who missed out on it. 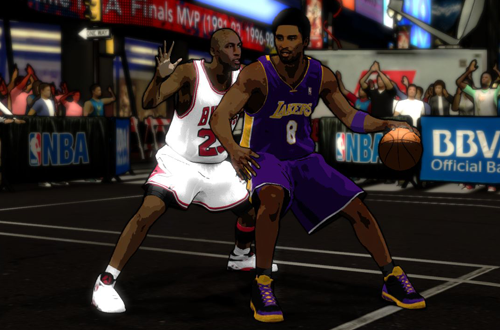 I remember quite a few people scoffing at the Legends Showcase DLC for NBA 2K12 when it was announced. It didn’t seem worth the money, and more than a few people grumbled that it was the only way to play with certain Legends in NBA 2K12. The fact that it was exclusive to the Xbox 360 and PlayStation 3 version didn’t please PC gamers, either. Nevertheless, the DLC – which featured mini-games, cel-shaded art, and the aforementioned additional historical players – was something that gamers were interested in. When it launched in November 2011, it was available at a price of $10 through the PlayStation Network, and 800 Microsoft Points on Xbox Live.

Looking back, it’s the kind of thing I’d love to profile in Wayback Wednesday. It’d be fun to revisit it, experience the stylised aesthetic, and share some impressions of the various modes of play. Unfortunately, I didn’t buy it at the time, and it’s far too late for that now. The main reason I opted not to buy the Legends Showcase is that I was playing on PC, and although I had an Xbox 360, I didn’t see myself double-dipping; not just for DLC that many of us felt should’ve been in the base game. I couldn’t have known at the time that I’d one day establish a weekly feature about retro basketball gaming, but in hindsight, I do wish I’d bought it just to have in my digital collection. 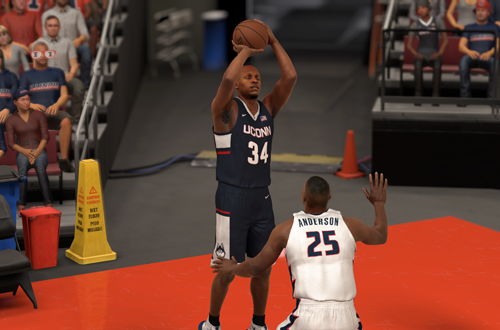 As of writing, NBA 2K17 is still available on Steam, despite online support ending on December 31st, 2018. It’s no longer available on PlayStation 4 or Xbox One, though. Neither is the All-Time College Teams DLC, a console-exclusive release that added all-time squads for the ten schools that were included as part of the MyCAREER story: Arizona, Connecticut, Georgetown, Louisville, Illinois, Georgia Tech, Wake Forest, Kansas, Oklahoma, and Michigan State. It was frankly overpriced and not that exciting, though it did unlock a few historical players that weren’t available on any of the retro NBA teams. Of course, that alone made it at least worthy of consideration.

Once again though, if you’re on PlayStation 4 or Xbox One and feel like dusting off NBA 2K17, it’s too late to get the DLC if you don’t already own it. Like the Legends Showcase DLC for NBA 2K12, it’s one of those things you needed to grab while it was available, just in case you wanted it later. It should be noted that although it’s too late to get the All-Time College Teams DLC on the platforms that officially received it, the content is available in the PC version. Yes, it’s yet another example of on-disc DLC, and can be unlocked with external roster editing tools. As such, it’s not too late to play with it on PC, but technically speaking, that wasn’t actually meant to happen. 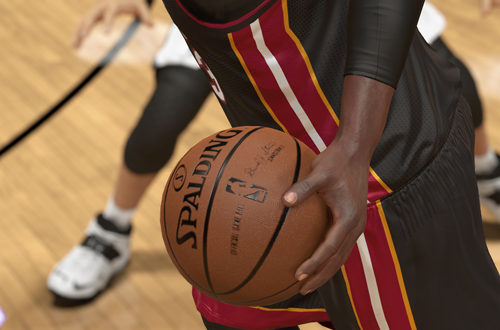 You may have noticed that the screenshot I’m using here is of the default basketball bearing David Stern’s signature, and not the updated ball with Adam Silver’s. That’s because when I reinstalled NBA 2K14 for PlayStation 4 on an external drive, it was too late for me to download that update again. As noted above when I was discussing Isaiah Austin in NBA 2K15, there are the official patches that still come through, and the in-game content updates that are no longer available since the servers are offline. Sadly, the updated basketball was pushed through as an in-game update, rather than an asset with one of the official patches. When I uninstalled NBA 2K14, I lost it.

Incidentally, this is also the case with the PC version of NBA 2K14, which as you may recall, was a port of the PlayStation 3/Xbox 360 release. However, it was no problem to back up the roster and content update files on PC, so even though the servers are offline, it’s easy enough to download the pack manually. It may have been possible to back up the content updates for NBA 2K14 on PS4/X1 as I’ve done for NBA 2K15 on PC, but it’s too late for me to try. When I reinstalled the game after the server shutdown, the only files the game could read were the MyCAREER saves, and even then only the offline ones can still be loaded. Let it be a lesson to all of us.

Roster and content updates in general are no longer available in games where the servers are now offline, but can you think of any other specific examples of things that we’re too late to get if haven’t already got them? Let me know in the comments, and as always, feel free to take the discussion to the NLSC Forum! That’s all for this week, so thanks for checking in, have a great weekend, and please join me again next Friday for another Five.

Maybe there was something on PSP… I dunno more examples. 🙂 All you can buy a copy of NBA 2K13 on Wii U in eShop (still sold). 🙂 It comes without the All-Star DLC (that was for preorders on X360/PS3 and later on sale digitally) like the Wii U disc version too, but I think when the store is switched off, it will be too late)

Last edited 22 days ago by beegees

Interesting that that’s still available. It’ll definitely join the list at some point, of course.

Good read Andrew, I totally forgot about waiting for the OKC stuff in Live 09, seems like every year iam calling out for missing things lol.

speaking of which there was a YouTube video showing you how to unlock next gen hairstyles on current gen I saw last night. Look like 2k has Hiden them in the current gen version ready to add them as some unknown time but some players have worked out that if you assign a headband to players like Fultz it unlocks his new and current hairstyles.

That’s interesting about the Next Gen hairstyles in Current Gen. I guess it’s not surprising, given that Jackson Ellis showed up in NBA 2K14 PC hidden in the rosters, not to mention references to “Alcatraz” that were placeholders for The Park.