Welcome to this week’s edition of The Friday Five! The Friday Five is a feature that I post every Friday in which I give my thoughts on a topic that’s related to NBA Live, NBA 2K, and other basketball video games, as well as the real NBA, and other areas of interest to our community. The feature is presented as either a list of five items, or in the form of a Top 5 countdown. This week’s Five is a list of five times that last gen games surprised us with an unexpected feature.

With the PlayStation 5 reveal event bringing us the official announcement of, and first look at NBA 2K21, we’re heading full steam ahead into the next generation. There are obviously plenty of questions yet to be answered, and more than a couple of concerns to be allayed. While NBA 2K14 wowed us pre-launch with the OMG Trailer, many of us were disappointed by the absence of staple features such as full roster editing, the traditional franchise mode, a standalone Playoffs mode, and other aspects missing from the PlayStation 4 and Xbox One version (until NBA 2K15 brought them back).

There’s also the question of whether the PC version of NBA 2K21 will be a port of the last gen or next gen release. Glancing back at what happened with NBA 2K14, we had to wait a year until the PC port caught up to the new generation. And of course, we have to wonder what will happen with the PlayStation 4 and Xbox One, which will become last gen upon the release of the PlayStation 5 and Xbox Series X. It seems almost inevitable that they’ll become afterthoughts in terms of quality and content, but if we look back through the years, there are a few times that last gen games surprised us with new features and content. Here are five such examples! 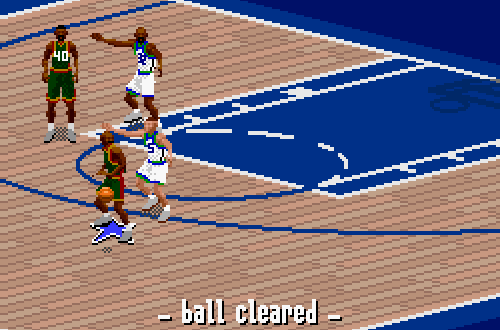 It’s amazing that NBA Live was still being released on the Super Nintendo as the era of the Nintendo 64 began. The console was definitely showing its age by that point, and the PC and PlayStation releases of NBA Live were clearly the priority. NBA Live 98 was the last in the series to be released on SNES, though only in North America. NBA Live 97 was the last NBA Live to be released worldwide on SNES, and though it did actually feature a couple of new animations, the hardware was tapped out as far any further graphical enhancements or other major improvements and additions. Well, almost. The developers did manage to squeeze in a couple of extra modes on SNES.

Those modes were single 2-on-2 and 3-on-3 halfcourt games. Options included the winning condition (up to 21 points), whether it was winner’s or loser’s outs, and whether baskets counted for two and three as usual, or one and two for a longer game. It wasn’t anything special, but it was exclusive to the SNES release; a bonus for last gen gamers who didn’t reap the benefits of the superior PC and PlayStation versions. Those two modes were also included in the SNES version of NBA Live 98, and expanded into a primitive version of the three-point shootout from other versions, as well as a practice mode with a point limit and ball checking after every made basket. 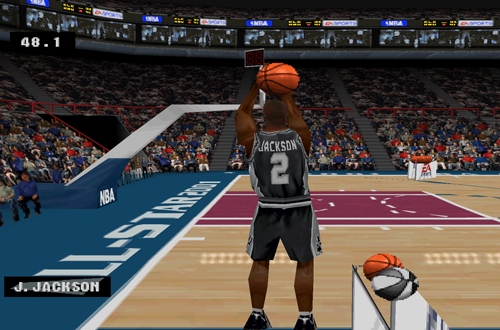 As discussed in my interview with former NBA Live programmer Rod Reddekopp, and noted in my retrospective for the series’ 25th Anniversary celebrations, the PC and PlayStation 2 versions of NBA Live 2001 were rebuilt as the old code was phased out. In addition to a noticeable change in the look and feel of the game, this process also resulted in a handful of modes and features being dropped. One of the modes on the chopping block was the three-point shootout, which had been in the game since NBA Live 98. Many of us grumbled about its absence, and it wouldn’t be until NBA Live 2005 that we’d see it return alongside the other All-Star Weekend events. 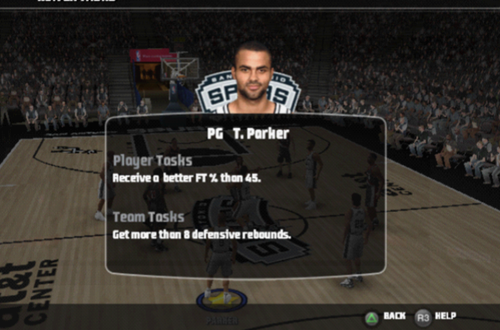 Trivia time! Which of these player-locked modes represented the first attempt at a career mode in NBA Live or NBA 2K: Rising Star, MyCAREER, My Player, or The One? If you answered My Player, then you’re correct in that it was the first fully fleshed-out, multiseason career mode in either series. However, a year before My Player debuted in NBA 2K10, NBA Live 09 featured Be a Pro, in which we assumed control of a single player. It wasn’t nearly as deep as My Player, but it nevertheless represented the first steps towards a single player NBA career mode; a rare example of NBA Live beating NBA 2K to the punch on an idea in these past two generations!

Here’s the odd part, though. It was actually the last gen version of NBA Live 09 that had the superior version of Be a Pro! On Xbox 360 and PlayStation 3, it consisted of a single game in which your player-locked performance was graded. Essentially, it was offline practice for Online Team Play. Meanwhile, the PlayStation 2 version of Be a Pro included a single season controlling either a created player, or an existing NBA player. There was also a single game mode, but in a season, you could upgrade your player and try to perform certain tasks for boosts. It’s weird to think that NBA Live actually had the first NBA career mode, and in a rather sloppy last gen release to boot. 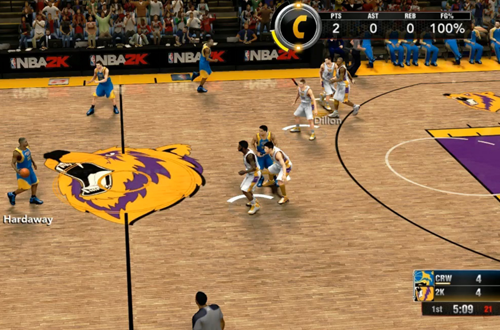 Complaints about NBA 2K’s online modes stretch back much further than the current generation. Gamers weren’t happy when Crew Mode fell by the wayside, and were eager to see it return. As such, there was much rejoicing when 2K announced that Crew Mode would indeed return in NBA 2K14…on last gen. Of course, it wasn’t quite the same mode as before. In fact, it was basically a forerunner to 2K Pro-Am. At the time the change disappointed gamers who were fans of the original concept, but given the current trends and the launch of the NBA 2K League, I’d suggest that the return of Crew Mode in NBA 2K14 was a glimpse into the future of online basketball gaming.

Unfortunately for gamers looking to make the jump to next gen, Crew Mode wouldn’t make it into the PlayStation 4 and Xbox One version of NBA 2K14. The mode would remain a last gen exclusive in NBA 2K15, until 2K Pro-Am finally made its debut in NBA 2K16. Of course, next gen had a trick up its sleeve with the introduction of Park in the PS4/X1 version of NBA 2K14, and that mode has arguably become the most popular connected experience in MyCAREER. Still, given the desire to see Crew Mode return following its disappearance after NBA 2K11, it was a stinging surprise for early adopters of next gen that its return in NBA 2K14 was strictly for last gen. 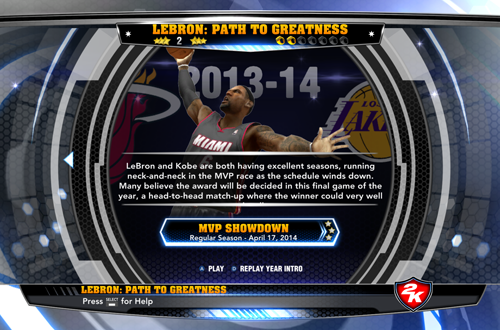 The PC version of NBA 2K14 being a last gen port initially came as a disappointment to many gamers. Of course, after we discovered what that meant for flexibility and compatibility in modding, the blow was softened somewhat. It also meant that the PC received a more fully-featured release. As I mentioned in my introduction, the PS4 and X1 version of NBA 2K14 was surprisingly barebones – not to the same extent as NBA Live 14, but nowhere near as deep as its last gen brethren either – so on the whole, it might’ve been for the best that the PC version remained a port of the PS3 and 360 release until the following year. NBA 2K15 was a much better game overall.

It also meant that the PC version included Path to Greatness, a creative mode that celebrated cover player LeBron James with fantasy scenarios based on him either staying in Miami or moving on after the 2014 season (in the process predicting the future with the latter). The fact that the last gen version had received such an in-depth mode in a year when it was about to become outmoded and very soon an afterthought, was a pleasant surprise. Once again, it remains to be seen what will happen as a new generation looms, and the PS4 and X1 are themselves on the verge of becoming last gen. Given these examples, we may be in for a few more surprises later this year.

Do you remember these examples of surprising additions in last gen releases? What are your expectations for the PlayStation 4 and Xbox One versions of NBA 2K moving forward, as well as your expectations for next gen? Have your say in the comments below, and as always, feel free to take the discussion to the NLSC Forum! That’s all for this week, so thanks for checking in, have a great weekend, and please join me again next Friday for another Five.

I fondly remember that PS2’s NBA 2K had some extra modes that aren’t present in the next gen like The Crib exclusively on 2K7 and the street courts around the world in most PS2 games.

Some more good examples! A lot of those things unfortunately get trimmed when there’s a jump to next gen.