The Friday Five: 5 Tips for Being a Good Online Teammate in NBA Live 19

Welcome to this week’s edition of The Friday Five! The Friday Five is a feature that I post every Friday in which I give my thoughts on a topic that’s related to NBA Live, NBA 2K, and other basketball video games, as well as the real NBA, and other areas of interest to our community. The feature is presented as either a list of five items, or in the form of a Top 5 countdown. This week’s Five features five tips for being a good online teammate in NBA Live 19’s LIVE Events and LIVE Run.

It’s a good time to play The One and its connected modes in NBA Live 19. The latest content update has doubled XP in celebration of the 2019 All-Star Weekend, offering an opportunity to make quicker progress on levelling up your One Player. Beyond that, the developers are keeping things fresh with new LIVE Events throughout All-Star Weekend, and the online team play experience of LIVE Run remains a fun way of hooping it up with your fellow virtual basketball enthusiasts. I’ve been taking part in a few LIVE Events myself this week, both solo and co-op.

I’ve generally had a good time playing the co-op LIVE Events in NBA Live 19, but the games have been frustrating at times. Some of my frustration can be attributed to inevitable lag or areas where NBA Live still has room for improvement, but on more than one occasion, I was left muttering and wondering what my online teammates were doing. That’s not to say that I never made a mistake, but I encountered quite a few of the common pitfalls of playing online with random teammates. Playing with randoms is never going to be quite the same as running with an organised squad, but here are five tips for functioning as a cohesive unit in NBA Live 19’s online modes. 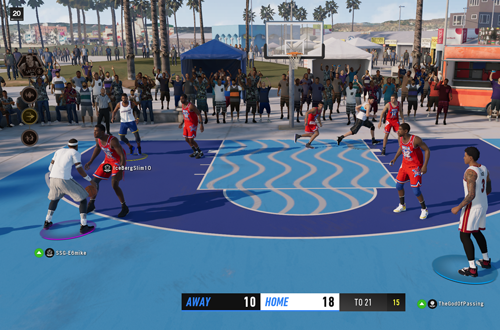 One of the most important aspects of basketball is properly spacing the floor. If the whole team is bunched up in one area, it doesn’t give the ballhandler room to work, nor anyone else sufficient room to get open. When playing online, especially with random teammates, it’s all too easy for everyone to congregate on the strong side because they want to be near the ball. It’s a common reflex because we’re all used to being Player One, and everyone is eager to touch the ball at some point so that they can feel involved with the play. This is actually a running theme throughout these tips, and one of the first areas it will affect your team’s play is bad spacing.

It can be hard to achieve if you’re not mic’d up and therefore unable to communicate with your teammates, but if you pay attention to where everyone else is setting up and moving to, you can stay on your toes and avoid getting in their way. Unless you’re setting a screen, don’t get too close to the ballhandler; they need room to make their move, and you don’t want to draw your defender into position to block their shot or impede their drive. Don’t run around aimlessly because you’re antsy to touch the ball and score. Keep the floor spaced, and save your sprint for making quick cuts and strong finishes at the rim. You’ll get a lot more open shots and easier drives this way. 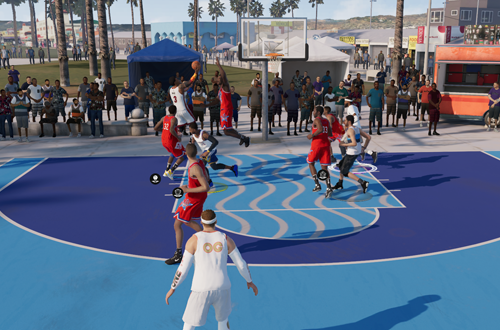 Ball-hogging remains one of the biggest problems in online team play. As I noted, we’re all used to being Player One, with no one to care if we’re playing somewhat selfishly. You need to work as a team online though, and that means sharing the ball, as well as not freezing out teammates for making a mistake. Ball-hogging not only leads to some really bad attempts, but is also discouraging for the rest of the team. A ball-hog can easily frustrate their teammates into lackadaisical play at both ends. It’s not a great excuse for slacking off, but it’s understandable if a teammate is chucking up shots when triple-teamed and refusing to pass to you when you’re wide open.

There are times when a great one-on-one player can take over a game – more on that later – but the general idea is to keep the ball moving to beat the defense and create open looks. If you see a teammate cutting to the rim or wide open at their spot, and you’ve got a passing lane, get them the ball! Should you find yourself smothered by the defense leaving a couple of your teammates with enough daylight to score, don’t force a bad shot. It is possible to be too unselfish, overpassing or forcing a pass when the defense is in position to pick it off, but not letting the ball stick and employing great court vision will allow your squad to run like a well-oiled machine. 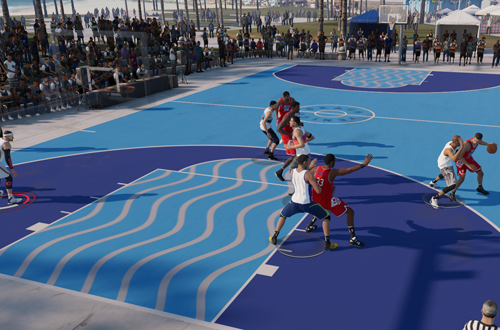 Defense is admittedly tougher to play online due to the input lag, but commitment at the defensive end will allow you to shut down opponents and come up with stops. It’s vital to get those stops in games where the win condition is scoring a certain amount of points, since they can end in an instant. The first step is to stay on your man and don’t switch unnecessarily. If the ballhandler isn’t your mark, don’t leave your man open to defend them instead. All too often, online players will unnecessarily switch because they want to get a steal. By all means switch and rotate if a teammate has been beaten, but otherwise, don’t pick up the ballhandler unless they’re your mark.

Positioning and movement is vital. Defense is about anticipating the moves of your opponent as much as impeding them, so when sticking to your man, you need to try to beat them to their spot. While you don’t want to give shooters an open shot, you also don’t want to be lagging behind as you chase them all over the court, especially if they start running you through some screens. In older basketball games you could pretty much just keep pace with opponents or easily catch up to them, but in NBA Live 19, you need to be smarter with your movement. Apart from that, try not to fall for fakes, time your steals well, and don’t let Defensive Assist drag you out of position. 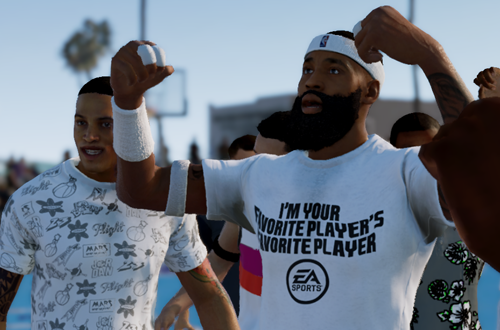 As noted above, ball-hogging isn’t something to be encouraged, but there are times when you’ll want to get someone the ball and let them do their thing. Some gamers are more adept at playing online than others, and are proficient at breaking ankles, hitting jumpshots, and finishing inside. Yes, it’s nice when everyone gets to touch the ball, and it’s necessary if you’re going to hone your skills, but if your team needs buckets and someone has the hot hand, now’s not the time to experiment. Get them the ball where they need it, and let them go to work. Keep spacing the floor and moving to spots where you can score if the defense collapses on them.

The flipside to this is if you’re the player with the hot hand, don’t get too cocky or start playing selfishly. Your team may be counting on you to score, but if the defense starts locking you down and you see that any of your teammates are wide open, refer to my previous point about sharing the ball. Other than that, keep getting into a position where you can do damage, and allow your teammates to set you up. If you’re one of the teammates feeding the hot hand, be mindful of the defense crowding them and clogging the passing lanes, and wait until they’re in position before giving them the ball. Even if one player is carrying the scoring load, you still need to work as a team. 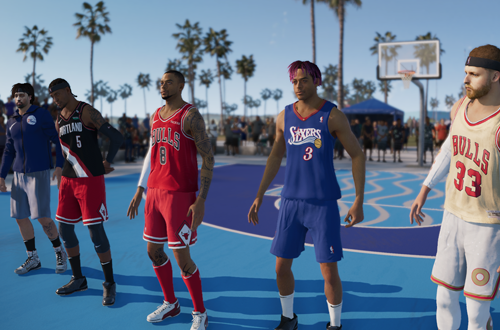 LeBron James posted an impressive triple-double against the Atlanta Hawks the other night, tallying 28 points, 16 assists, and 11 rebounds. Gaudy as those stats may be, it was the Hawks who came out on top, defeating LeBron’s Los Angeles Lakers 117-113. While his individual performance and highlights were naturally celebrated on social media, I’m sure that LeBron would’ve much rather had the win, especially over a lottery-bound team like Atlanta. Jaw-dropping highlights and big numbers are nice, but the ultimate goal of basketball isn’t just to post stats or pull off flashy moves; it’s to win games. Triple-doubles and ankle-breakers just aren’t as special in defeat.

So it goes on the virtual hardwood and blacktop, too. Sure, we all have the goals we’re trying to hit to level up our One Player, it’s always fun to score, and everyone wants to feel as though they’ve contributed. As the old saying goes, however, there are a lot of things that contribute to winning that don’t show up in the box scores. Basically, this means prioritising winning and good basketball plays over padding your stats or forcing a highlight. Hit the open man, make the defensive rotation. Don’t force bad shots because you want to score, or constantly gamble on defense to rack up steals. Play as a team, and win as a team. You’ll still have your moments along the way.

Have you been playing LIVE Events or LIVE Run in NBA Live 19? What have your experiences been like, and do you have any additional tips for being a good teammate in online team play? Have your say in the comments section below, and as always, feel free to take the discussion to the NLSC Forum! That’s all for this week, so thanks for checking in, enjoy the 2019 All-Star Weekend, and please join me again next Friday for another Five.