Welcome to this week’s edition of The Friday Five! The Friday Five is a feature that I post every Friday in which I give my thoughts on a topic that’s related to NBA Live, NBA 2K, and other basketball video games, as well as the real NBA, and other areas of interest to our community. The feature is presented as either a list of five items, or in the form of a Top 5 countdown. This week’s Five is another list of five unsolved modding mysteries.

As I mentioned in my first Friday Five article about unsolved modding mysteries, the whole hobby is dedicated to figuring out the inner workings of the games we play, and discovering how we can change them. We’ve made many exciting discoveries which in turn have led to the creation of fantastic projects, but there are still some gaps in our knowledge. Although we’re constantly looking to innovate and solve those mysteries, sometimes we have to admit defeat – if only temporarily – and file them under the heading of modding barriers that we may or may not ever overcome.

Incidentally, I originally included “blanking out career stats in NBA 2K11” on this list, as it’s something I’d noticed in the Chinese roster updates and had no idea how it was done. Not only have I since been informed that it’s an option in the Chinese trainer for the game, but I accidentally stumbled upon a method of doing it with REDitor II. It just goes to show that even when a game has been out for a decade, we can continue to solve modding mysteries and learn new techniques. That may mean that there’s hope of finding answers to these five modding mysteries at some point, but as of now, they do remain unsolved. 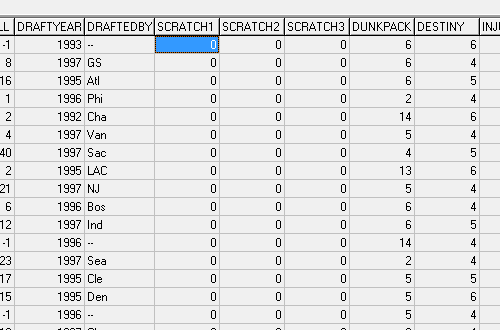 When I oversaw my first redesign of the NLSC in late 2002, having taken over the site the previous year, it was my intention to launch it with a wealth of new content that would help out the modding community. The new design wasn’t well-received – and in hindsight, it was rather jarring – but people did seem to appreciate that I’d mapped the DBF files for various PC releases of NBA Live. Although we had the NBA Live Toolkit which simplified roster editing, not everyone was able to run it due to the module requiring Microsoft Access. I also figured it would be useful for anyone who wanted to edit the DBF files directly in order to create custom teams and the like.

I’d like to think that that was the case, especially when later games in the series didn’t have a dedicated editor and we had no choice but to edit the DBFs in DB Commander and other database or spreadsheet software. I know that I found it handy to have that information on hand when I was making my rosters. I managed to map all the crucial and commonly edited fields, but some remain unsolved modding mysteries. Among them are the fields labelled “Scratch” in the players.dbf database. Original players all seem to share the same values in later games, so it’s quite possible that it became a leftover field that no longer does anything. I’ve always left it alone, to no ill-effects. 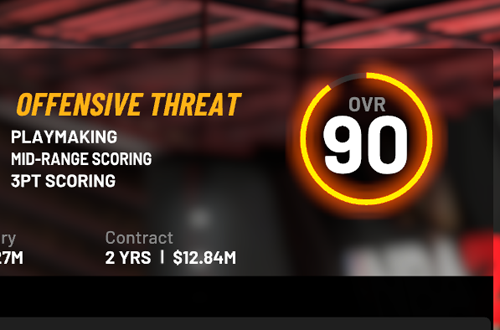 Here’s what we do know about how Overall Ratings are calculated. They’re not an average of all the individual ratings, because a player doesn’t need to have all of their ratings be 99 to be a 99 Overall. We also know that they’re not all weighted the same, because changing some ratings doesn’t have as much of an effect either way. In some games, it’s clear that a player’s position is a factor, as certain ratings clearly increase or decrease in importance, and Overalls can change slightly when a player’s position does. It’s even been proven that the Overall Rating for your player in MyCAREER is calculated differently to original and created players, specifically being inflated.

With that being said, we don’t know the exact mathematical formulas for calculating Overall Ratings in any NBA Live or NBA 2K games. It’s possible that someone somewhere has figured it out, but I don’t recall it ever being made public knowledge for any specific release. I suppose it’s not vital that we know; after all, we’re still able to manage player ratings without it. Still, Overall Ratings are important – even if their importance is sometimes overblown – so it might be useful, and it would at least be interesting if we knew the exact formula. It’s one of those modding mysteries that we don’t necessarily need an answer to, but it would be good to know all the same.

3. The Precise Purpose & Effect of SCOREAREA 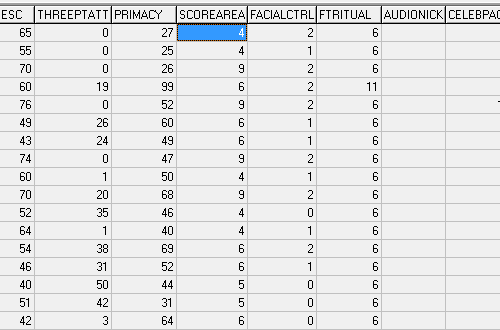 I wasn’t the first person to map the fields and values in NBA Live’s DBF files; just the first to compile it into a series of reference materials for the NLSC. The task had been undertaken during the development of the aforementioned NBA Live Toolkit, in order to properly label the fields and present users with the range of valid data they could select or enter. To that end, someone figured out the SCOREAREA field long before I took a look at the DBFs. That is to say that they figured it meant the area in which a player scored most of their points, and listed examples based on the default data. That remains the “official” explanation and mapping of the field, but there’s a problem.

To this day, we’re not entirely sure of the actual effects of SCOREAREA. The name of the field seems self-explanatory and looking at the default values provides some clues, but there are inconsistencies. Players of different positions and play styles share the same SCOREAREA value in some of the games. Furthermore, it doesn’t seem to make much of a difference during gameplay, either when controlled by the user or by the CPU. I’d suggest that we’ve got a rough idea of what it does, but between the inconsistent values and the more primitive AI and gameplay mechanics, we haven’t been able to properly explain or fully utilise this hidden player attribute. 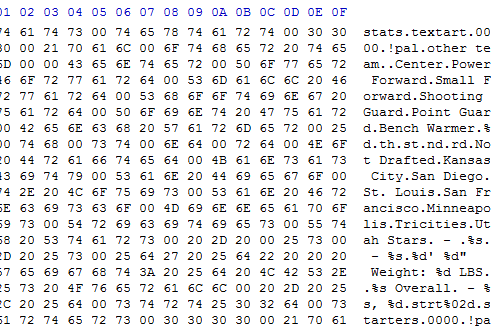 We could easily file this under unexplained and interesting Easter eggs as much as modding mysteries, but since it’s something we found while poking around in NBA Live 96 PC’s executable file, it’s worth a mention. After the text strings for the current city and team names, there’s text for former locations and defunct teams including San Diego, Kansas City, Minneapolis, St. Louis, San Francisco, Tri-Cities, and the Utah Stars. One active player, Otis Thorpe, uses the Kansas City data as the Kings drafted him in 1984 and moved to Sacramento in 1985. San Diego and the Utah Stars would have been for Terry Cummings and Moses Malone, who were both in NBA Live 95.

Tim’s editor for NBA Live 96 provided access to Kansas City and San Diego under the “Drafted By” field, but none of the other teams are available as options. The inclusion of St. Louis and Tri-Cities (Hawks/Blackhawks), Minneapolis (Lakers) and San Francisco (Warriors) is more puzzling, and perhaps suggests that the unlockable Legends from the console version were originally going to be included as Easter eggs on PC as well. Just as interesting is the label of “Bench Warmer” among the player positions. It isn’t used anywhere in-game, and can’t be assigned in the editor. The exact purpose of this data and how to utilise it is something we’ve never found out. 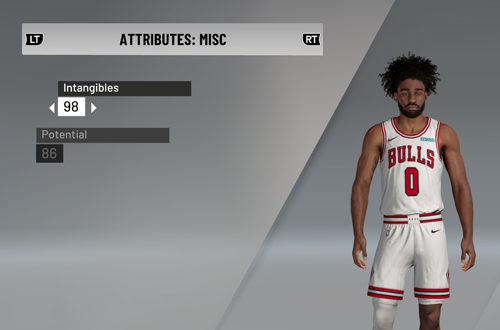 Now, we have actually discovered one function of the Intangibles attribute in NBA 2K. It can be used to artificially raise or lower a player’s Overall Rating, so that it looks more accurate in relation to their value and standing in the league. In addition to optics, this helps with trades in MyLEAGUE. However, we still haven’t figured out what other effects it has, if any. It’s been suggested that it serves as a secondary clutch and consistency attribute, or provides a small hidden boost to all ratings. Experiments have been inconclusive – at least far as I’m aware – and so Intangibles remains one of the unsolved modding mysteries for those who edit and create NBA 2K rosters.

This one is also frustrating to me from a gameplay standpoint. In MyCAREER in NBA 2K17, running through drills in team practices would improve attributes that couldn’t be upgraded with VC. Some of these boosts were tied to the drill in question, such as the free throw drill improving your free throw rating; logical, right? Some drills granted upgrades to randomly chosen attributes however, one of which was Intangibles. Since it didn’t have any effect on a MyPLAYER’s Overall Rating, if it didn’t actually affect anything else, then it was a complete waste of a drill. As such, solving this mystery would also satisfy my curiosity about those mechanics.

Modders and mod users, what are some other unsolved modding mysteries that you can recall? Have I mistakenly overlooked a solution with any of these? Let me know in the comments section below, and as always, feel free to take the discussion to the NLSC Forum! That’s all for this week, so thanks for checking in, have a great weekend, and please join me again next Friday for another Five.