Welcome to this week’s edition of The Friday Five! The Friday Five is a feature that I post every Friday in which I give my thoughts on a topic that’s related to NBA Live, NBA 2K, and other basketball video games, as well as the real NBA, and other areas of interest to our community. The feature is presented as either a list of five items, or in the form of a Top 5 countdown. This week’s Five is a list of five unsolved modding mysteries…at least as far as I’m aware.

In many ways, modding is about unravelling the mysteries of video games. It involves digging through the game files to find out how they work, and how we can alter them to improve a title, or create brand new experiences. Modding has allowed us to find and utilise hidden and leftover content, put assets to use in new ways, and with a bit of trial and error, swap files between games to add missing content and even rig up some unofficial fixes. In short, modding helps us to become familiar with the inner workings of the basketball games that we play.

Of course, for all the creative minds we’ve had in our modding community over the years, there are times when we’ve been stumped. For all our digging, tinkering, and experimenting with all the techniques that we know, there are a few things that we just haven’t been able to figure out. Although these unsolved modding mysteries haven’t prevented us from creating several amazing projects year in and year out, they have meant that some ambitious and creative ideas have been left on the drawing board, or necessitated workarounds. Join me as I take a look at five mysteries in NBA Live and NBA 2K modding that, as far as I know, remain unsolved. 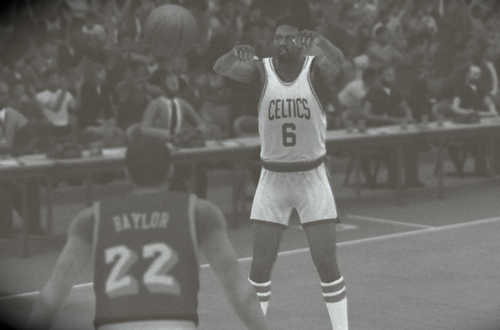 On more than one occasion, I’ve referred to NBA’s Greatest in NBA 2K12 as one of the best modes we’ve ever seen in a basketball video game. It would’ve been one thing to simply expand on the retro content that was introduced in The Jordan Challenge, but NBA’s Greatest went all out with era-specific presentation. It’s something that I’d love to see return as optional presentation settings, because as it is, it was a one-time deal. To this day, no one has been able to figure out how the special effects were done in NBA’s Greatest. Obviously they’re visual and audio filters, but we’ve never been able to locate the files that produce them, and use those effects in modding projects.

It’s a shame, as being able to utilise those effects outside of NBA’s Greatest could’ve really enhanced retro roster projects without the need for external visual tweaks. Not only that, but in the NBA’s Greatest challenges that take place prior to the three-point line’s introduction, the arc is absent from the court and all field goals count for two points. If you play with those teams outside of NBA’s Greatest, the three-point arc and rules are in effect. Again, it’d be great to have those historical settings for presentation and gameplay in future releases, but the mechanics behind those effects and modifiers in NBA 2K12 remain a mystery. As such, we were never able to put them to use. 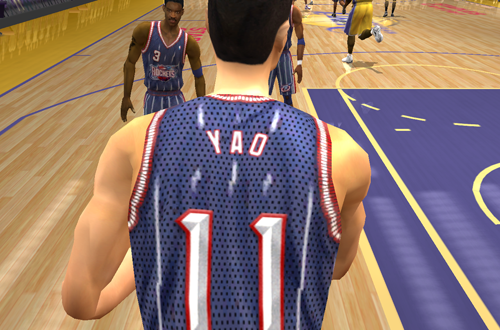 For those who are unaware – and that included me before Yao Ming entered the NBA – Chinese naming conventions place the family name before the given name. This is in contrast to English naming conventions, which place the given name first, family name last, and any middle names in between. Understanding this difference clears up any confusion as to why Yao Ming had “Yao” on the back of his jersey, when his name isn’t “Ming Yao”. However, when Yao made his debut, video games like NBA Live 2003 weren’t designed to account for Chinese naming conventions. The solution was to use Yao in the surname field of the roster, which did make him “Ming Yao”.

That solved the issue of displaying the correct name on the back of his jersey, but it was obviously still an inaccuracy. In NBA Live 2004, his name was switched so that Yao was his first name in the database, and Ming his surname, correcting his name on roster screens. However, a special variable used the data from his first name field to correctly display “Yao” on his jersey. Now, do you think we could find what allowed that exception? I certainly never found out, so when Yi Jianlian came along and I was making the roster updates, I had to make him Jianlian Yi, as EA themselves had once done with Yao Ming. All these years later, I’d still like to know the answer to this one. 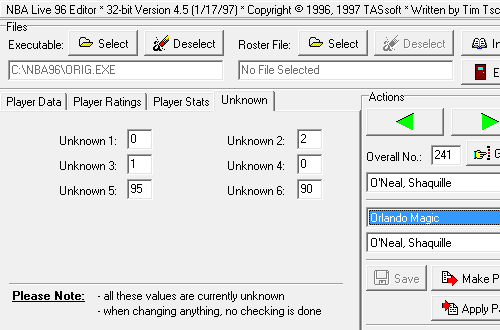 Modding NBA Live’s rosters became a whole lot easier after they adopted DBF files, but thanks to the efforts of our founders, we had the tools to tinker with the first three games in the series. Tim, Lutz, and Brien did a remarkable job putting together their editors, especially when you consider they had to map all the appropriate offsets in the executable file. I’ve gone through those files with a hex editor, and trust me; it’s not as easy as a database with labelled columns that are clear in their function, or use an abbreviation that’s straightforward to decipher. Those old editors let us modify all of the essentials, but there were a few unknown values that remain mysteries.

There were some educated guesses, and I actually remember emailing Tim and Lutz to pick their brain about what those unknown values might be. They passed along their findings/speculation, though I must admit I lost that email a long time ago. That probably means that knowledge has been lost to time, which is unfortunate. It’s very likely that at least one of the values is an early version of the Primacy rating, which governed which players took the most shots, but comparing values between players doesn’t yield consistent results. I suppose it isn’t that important now, and those old updates for NBA Live 96 turned out great anyway, but it still piques my curiosity. 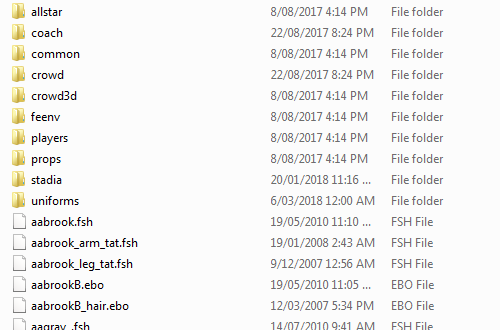 Here’s an unsolved modding mystery where we know the mechanics, but not the reasoning behind the name (unless someone did work it out, and I’ve forgotten it). The PC releases of NBA Live organised their files very tidily into different folders for audio, menu art, faces, courts, jerseys, and so on. In NBA Live 2003 and NBA Live 2004, the art files were stored in two folders: render and renfe. The render folder contained files that were rendered in gameplay, while renfe contained art that was rendered in the frontend (and overlays). The render folder is also where we placed CustomArt folders, including any custom logos and menu files. It was a good system.

NBA Live 2005 streamlined that system by removing the need to create folders. Now pretty much every custom file that wasn’t a .viv container could be placed directly in the main art folder, which was now called sgsm (the frontend folder had also been renamed from renfe to just fe). The change in CustomArt methods made modding a lot easier for modders and mod users alike, but all these years later, I have no idea what “sgsm” is meant to stand for. Most file and folder names for the PC versions of NBA Live are logical and descriptive, but since 2004, sgsm has me stumped. I realise it’s not that important to know, but it’s another thing that I remain curious about. 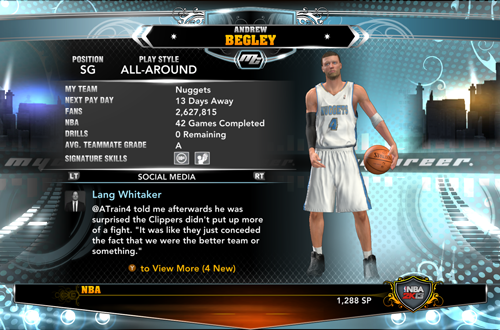 Let’s get back to the technical side of unsolved modding mysteries. First of all, it’s great to see mods for the last few PC ports of prior gen NBA 2K (i.e. NBA 2K11 to NBA 2K14). I myself am working on a roster update for NBA 2K11, and after hitting a bunch of roadblocks last season, I’m eager to see the project through to fruition for the 2020 NBA campaign. As far as NBA 2K13 and NBA 2K14 mods are concerned, skoadam and slimm44 are still doing fantastic work with updates to U R Basketball. However, one of the questions they always seem to get is whether the current rosters – or the retro season mods for that matter – are compatible with MyCAREER.

As I understand it, there’s no way to ensure that a custom roster is compatible with MyCAREER, mainly because some of the same bugs can occur with the default rosters for NBA 2K13 and NBA 2K14. Unfortunately, that was a time when the PC version was barely supported post-release. Official rosters came through, but other content updates didn’t, nor did any of the bug fixes. If there’s one good thing about NBA 2K being digital-only through Steam these days, it’s that we do get all the updates on PC, even if they are sometimes delayed. Sadly, we’ve never been able to devise an unofficial fix for MyCAREER crashes, using custom or original rosters.

Can you think of any other unsolved modding mysteries? For that matter, are there answers to these mysteries that I (and maybe others in the community) aren’t aware of? Let me know in the comments section below, and as always, feel free to take the discussion to the NLSC Forum! That’s all for this week, so thanks for checking in, have a great weekend, and please join me again next Friday for another Five.