Welcome to this week’s edition of The Friday Five! The Friday Five is a feature that I post every Friday in which I give my thoughts on a topic that’s related to NBA Live, NBA 2K, and other basketball video games, as well as the real NBA, and other areas of interest to our community. The feature is presented as either a list of five items, or in the form of a Top 5 countdown. This week’s Five is a list of ways that I’ve changed my habits when it comes to MyCAREER.

Today’s my birthday, and for those who are interested, I’ve turned 36. Yes, I was just a couple of months shy of turning 17 when I took over the NLSC in August 2001; time sure has flown! In that time, I’d like to think I’ve grown, matured, and gained a new perspective. Of course, there are some people who might say that running a site dedicated to video games at the age of 36 isn’t a sign of maturity, but hey, let’s leave the cynicism to Next Gen! I say that as long as you keep things in perspective and take care of your responsibilities, video games are a perfectly acceptable adult hobby.

Of course, as I’ve grown older and basketball games have evolved, so too have my tastes. As I’ve mentioned before, I always considered myself a franchise gamer, as I became a huge fan of those modes once they were introduced in the late 90s/early 2000s. Over the past decade however, I’ve spent more time with career modes and their connected online experiences. Mind you, the way I play MyCAREER has also changed from when I first got hooked on the mode back in NBA 2K13. Some habits have been influenced by the changes in recent titles, while others could probably be attributed to me getting older, grumpier, and less patient. Here are five examples! 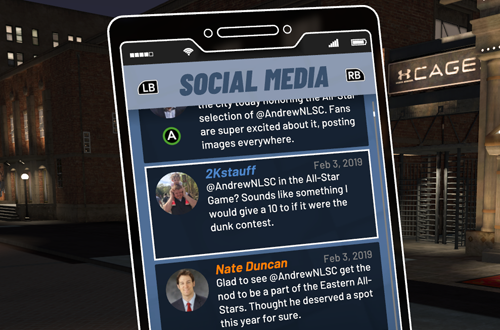 I’ll freely admit that I was drawn to the fake in-game Twitter feed in NBA 2K13. It proved to be an immersive feature, and I liked getting feedback about my play, especially when I saw compliments after a big game. It may sound silly, but it made the experience feel more “alive”, weaving a narrative as I started putting up bigger numbers and winning over the fans. I’ve also always liked the way that the Twitter feed in MyCAREER manages to capture the dumb takes you’ll often see. Yes, it’s ridiculous when a fan chides you when you’ve put up record stats in a close loss, but again, have you seen what people post on Twitter? It’s a rather accurate parody.

Much like real social media, however, it does get tiresome. I soon figured out the minimum number of points, rebounds, and assists I needed to not see the dumbest takes about my performance, which made things a bit predictable. There are only so many messages that can be included too, so after a while it becomes repetitive. These days, I very rarely look at the fictional Tweets in MyCAREER; in fact, I usually only notice the ones that pop up in the crowd after I make a highlight play. That’s really all you need to see, and while I do think it’s a good atmospheric feature, paying attention to the in-game social media feed is no longer one of my regular MyCAREER habits. 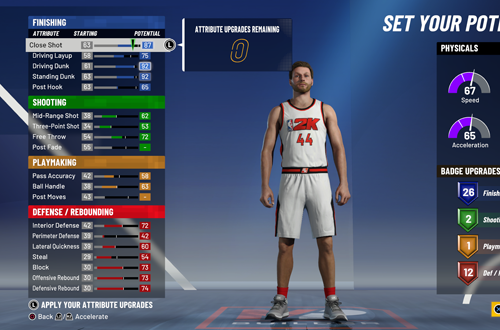 On top of considering myself to be a confirmed franchise gamer, I always thought of myself as an offline gamer in general. Sure, I’d dabbled with some online play, but it never drew me in. Then I started playing 2K Pro-Am with the guys in NBA 2K16, and suddenly that all changed. In fact, it gave me a new reason to play MyCAREER, as I wanted my player to be viable for the online scene. It also led to me spending money on VC – something I thought I’d never do – in an effort to reduce the grind. As NBA 2K introduced new MyPLAYER Archetypes and build systems, I found myself caring a lot more about meta-gaming, and preparing a MyPLAYER for online play.

This meant choosing a build with physical attributes and animations that would be the most effective online and offline. It meant grinding as soon as I got a new game; there could be no delay, no starting a MyCAREER game with updated rosters closer to the new season tipping off. These habits have been taken to the extreme in NBA 2K21, since it launched with 2020 season rosters. The NBA side of MyCAREER isn’t a lot of fun right now, so I’ve been working with a build that I can use almost exclusively online while still levelling up and earning Badges. In previous games – including last year – I would’ve cared more about the NBA, but I’m kind of over that side of things. 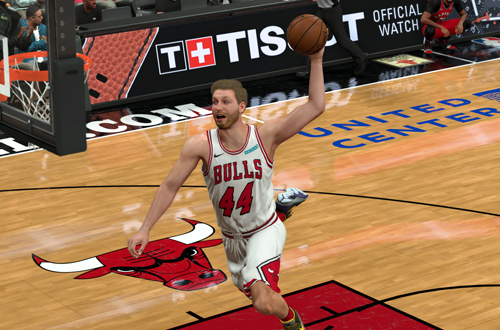 When I look back at my NBA 2K13 MyCAREER, it’s funny to think that it felt like an achievement when I scored 40+ points. In the second season of my NBA 2K19 MyCAREER, I averaged over 60 points per game, shattering the record for 40 and 50 point games in a single season, and destroying the record books. I also had the ball in my hands a lot, leading to insane assist records. While certain mechanics in the newer games make it easier to dominate in MyCAREER, it’s also the result of changing my habits. These days, I have no qualms about hitting pass to call for the ball, and taking my time to make my move to score, or setting up a teammate for a bucket instead.

In NBA 2K13, I was far less assertive about calling for the ball. It didn’t help that the game was much harsher in penalising you for holding the ball too long, and it does feel as though teammates in newer games are more willing to pass you the ball on cue after you’ve levelled up and built team chemistry. Still, I was definitely tentative back in my first real MyCAREER game; as if I were concerned that I might offend my AI teammates if I were a ball hog! Considering all the grinding we now have to do for both VC and Badge Points, we can no longer afford to have overly unselfish habits when it comes to asking for the ball in NBA games, and so I’m far more demanding. 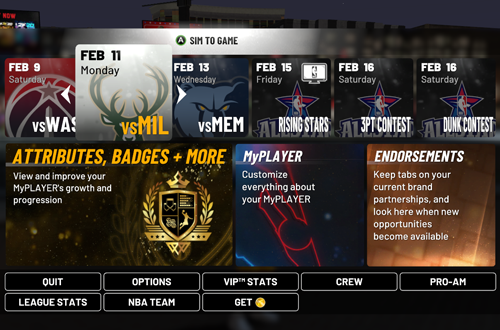 A couple of years ago, I discussed the need to make peace with simulating, especially as one gets older and doesn’t have as much free time. It’s easier in franchise modes than in MyCAREER due to the aforementioned grinding, but it’s still feasible once you’ve made enough progress. Be it a franchise or career mode game, I used to pride myself in playing every single game in a season, and on twelve minute quarters. I’ve had a lot of fun times doing that, but as the years have passed, it’s definitely become harder to accomplish. By the time I found myself drawn into another MyCAREER game in NBA 2K20, I was far more open to the prospect of simulating games.

As soon as I maxed out my Badges about 60 games into my first season, that’s exactly what I did. By that point I was well on the way to a 99 Overall, I’d played the All-Star Game, and had unlocked most of the MyCAREER-related Trophies. With no more Badges to earn or upgrade, the remainder of the regular season had very little use or appeal. I simulated until the Playoffs, played through the postseason to a ring, and then just used that player in The Rec and Pro-Am. It also afforded me the chance to make a second build, though I mostly stuck to online play with it, too. Again, leaving behind the NBA portion of MyCAREER is another example of my changing habits.

5. No Longer Bother With MyNBA2K App 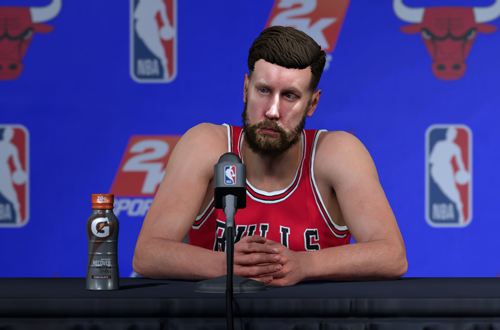 I used to download the MyNBA2K app every year for the purposes of grinding extra VC, and scanning in my face (or at least, attempting to). The prospect of using the app to grind VC is no longer appealing, thanks to the card game and other mini-games being rather boring. Additionally, the amount of VC that you can earn has been nerfed over the years, so it’s simply not worth enduring the dullness of those games just to boost your balance by a measly amount. As I alluded to, I haven’t had much luck with the face scan functionality in the app, either. The results have either been very poor, or I’ve encountered technical issues that the game’s error messages try to pin on me.

With that in mind, I haven’t even bothered to download the MyNBA2K app these past few years, as there’s really no incentive to do so. Considering how easy it’s been to get a really good face scan in NBA Live’s companion apps, I haven’t felt like dealing with the frustration that comes from trying to get NBA 2K’s scan to work. Once again, the methods of grinding for extra VC are less enticing than the in-game avenues, so I’ve had no use for MyNBA2K. With that being said, seeing some of the face scans that people have posted has me considering giving it another try in NBA 2K21. Grumpy old man that I am, I’ll probably only be able to tolerate a couple of failed attempts.

MyCAREER gamers, have your habits changed over the years? Have your basketball gaming habits in general noticeably changed with the games, or as you’ve grown older? Let me know in the comments below, and as always, feel free to take the discussion to the NLSC Forum! That’s all for this week, so thanks for checking in, have a great weekend, and please join me again next Friday for another Five.