The Friday Five: 5 Ways NBA 2K Online Is A Mess

Welcome to this week’s edition of The Friday Five! The Friday Five is a feature that I post every Friday in which I give my thoughts on a topic that’s related to NBA Live, NBA 2K, and other basketball video games, as well as the real NBA, and other areas of interest to our community. The feature is presented as either a list of five items, or in the form of a Top 5 countdown. This week’s Five outlines five reasons that the online scene in NBA 2K is a mess.

This isn’t the first time that I’ve discussed problems with the online experience in NBA 2K, and while I’d prefer not to harp on issues or be repetitive in my content, it’s also important to point out problems. This is particularly important when certain issues remain unresolved for several years running, leading to increased frustration for everyone, and an aspect of basketball gaming that isn’t nearly as good as it could and should be. Having spent more time playing NBA 2K online recent years, I’ve grown dismayed and disenchanted with the experience due to several recurring problems.

Frankly, NBA 2K online is a mess. It’s kind of bewildering, actually. With the launch of the NBA 2K League, the online scene is obviously being pushed as a big part of the game, and yet it’s never been weaker or less inviting. That’s not to say that it can’t be any fun at all. I won’t pretend that I haven’t had enjoyable sessions here and there, or that NBA 2K online doesn’t have anything to offer; at least on paper. The good news is that there are solutions that would clean up the mess that is online play in NBA 2K. The bad news is that many of the problems are persistent legacy issues, so it remains to be seen if they’ll ever be properly addressed in future games. 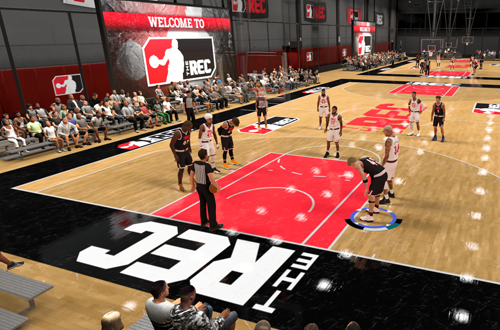 A Tweet by Tyceno back in June aptly and succinctly sums up some of the most persistent gameplay-related issues when it comes to online play. An overreliance on animation selection and canned scenarios leads to contrived moments where we’re hoping the RNG will be kind to us, rather than having control over our success. Now, NBA Elite 11 demonstrated the problem with full control over shooting with its three-point hook shots, but there’s a middle ground here. Online and offline, we’re at the mercy of the game picking the right animation whenever we make an input, and dice rolls that feel inconsistent. It’s an approach that holds back the competitive scene.

So many times, zigzag cheese has been addressed to some extent, only to pop up in the next game (or indeed, a patch) because the developers have caved to complaints from gamers who just want to exploit a move over and over again. The issue of being able to spam steal for cheap interceptions was brought up many times during NBA 2K19’s lifecycle, and it’s still a problem as of NBA 2K20. Problems with animations, RNG, physics, and balance that plague offline play are just as frustrating in the online arena. Compared to a game like Rocket League, NBA 2K isn’t properly designed for competitive play, and it definitely shows in the quality of NBA 2K League games. 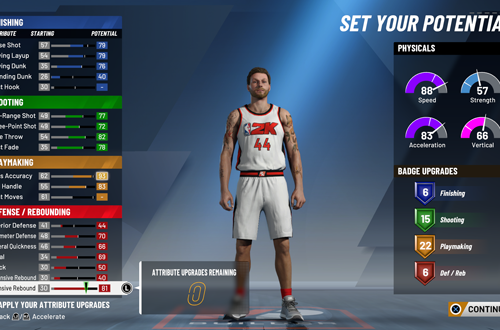 Another issue that Tyceno noted is the complete mess that is MyPLAYER builds. For the last few games, NBA 2K has tried to build on the Archetype system introduced in NBA 2K17, providing us with more customisation options and the ability to create hybrid player types. The problem is that it’s very easy to make the wrong choice, thus creating a player that isn’t fun to use offline, isn’t viable to use online, or in the worst case scenario, both. Meta-gaming has led to some overpowered builds. As Tyceno also noted, there are defensive-oriented builds that are just as powerful as offensive builds, with unbalanced mechanics overriding intended advantages and disadvantages.

Again, this means that NBA 2K online is less about stick skill and basketball strategy, and more about picking the right build and Badges that will virtually automate aspects of the game via unfair boosts. Throw in the Takeover meter – not to mention an ability to mix and match Takeover abilities in NBA 2K20’s MyPLAYER Builder system – and an OP build in the hands of someone who knows all the cheesy exploits is an absolute gamebreaker. Sure, everyone could use those builds, but that just emphasises the problem of there only being an illusion of choice, not to mention it’s led to quite a homogenised style of play. Player builds are a mess that need to be sorted out.

3. Quitting Games is a Mishandled Problem 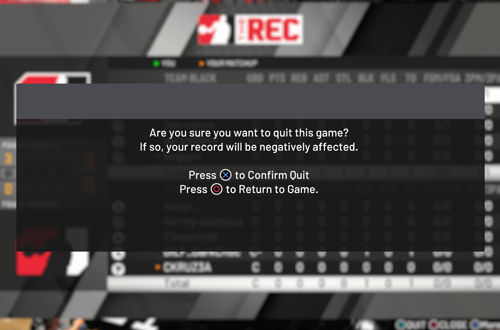 It’s safe to say that I’m not the only one who feels that NBA 2K online has become a mess, as I see a lot of my fellow gamers getting frustrated with the experience. On top of that, there’s sadly also a significant amount of poor sportsmanship and elitism, but more on that in a moment. The bottom line is that it’s not uncommon for gamers to quit during games, back out of Got Next in The Playground or the locker room in The Rec, or change their mind and disappear while a Rec game is loading. On more than one occasion, I’ve found myself the only user in a Rec game by the time it starts, and that is not a fun experience. You may ask me why I don’t just quit in those situations.

Well, there are measures in place that punish quitting, flagging your account so that it’s more difficult to get a game, or even locking you out for a period of time. This is a good idea in theory, though a lot of quitters get around it by dashboarding or causing a connection error. If we’re put in an unenviable position of having to play 1-on-5, there’s no sportsmanlike way to forfeit the game and not be punished. Additionally, if an opposing team quits, you don’t get any Badge or MyREP progress, and your stats also take a hit. The current measures are better than nothing, offering some incentive not to quit, but they don’t truly discourage quitters from wasting everyone’s time. 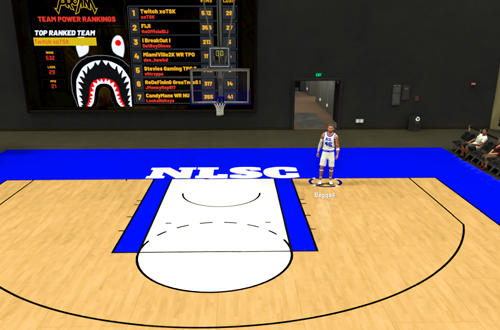 Referring once again to Rocket League, what really makes its online scene so great is that it caters to newbies and elite players alike. The Casual and Competitive settings offer suitable ranked and unranked options, and the grading system is geared towards fun and fair matchups. NBA 2K online has none of these matchmaking mechanics. In The Rec, there’s a vague divide governed by Overall Ratings, and an imprecise tier system in 5v5 and 3v3 Pro-Am that seems to rank teams quite randomly. As for The Playground, everyone is tossed into the same Neighborhood – ratings, MyREP, and experience be damned – and at the mercy of waiting around at the Got Next spots.

This complete and utter mess causes so many problems. Experienced players don’t want to play with newbies, but newbies can’t become experienced if they don’t play. Throwing them into the same Neighborhood creates that Catch-22. Got Next literally simulates the boring process of waiting in line to play. Gamers are left to handle matchmaking themselves, leading to elitism and snobbery, and avoiding tougher matchups in order to feast on less experienced and low-rated opponents. And finally, 5v5 Pro-Am no longer facilitates games with AI players; a gatekeeping measure that, like the other aforementioned issues, would be solved by actual, proper matchmaking.

5. Toxicity That’s a Mess to Navigate 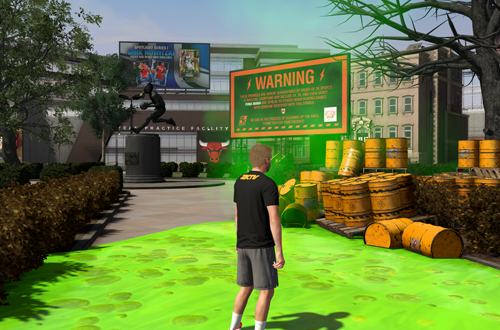 In Fallout 4, there’s an area called the Glowing Sea: a heavily irradiated part of the wasteland with deadly weather that will quickly kill you, if the mutated creatures don’t get you first. I mention this because it’s the perfect analogy for the mess that is NBA 2K online. The issues I’ve discussed already – problems with gameplay, a lack of balance in MyPLAYER builds, inappropriate handling of quitters, and the absence of matchmaking – have combined to cultivate a toxic atmosphere. From quitting in The Rec after a 0-4 start to judging a potential Playground teammate on the clothes their avatar is wearing, NBA 2K online is an unfriendly mess of an experience.

Forget sportsmanship. Should you find yourself the sole survivor in The Rec, you’ll no doubt be hit with a full court press and triple-teamed, even when you’re trailing by double digits and being completely run over. You might say that’s just competition, but it’s not sporting. Since you can’t forfeit without penalty, you’re between a rock and a hard place. The Rec is intended as an alternative to gamers who can’t get a squad of five together, but it’s hardly viable with the toxic style of play that’s all too common there. NBA 2K has some great concepts for its online modes, but restrictions, a lack of needed functionality, and toxic gatekeeping, have made a complete mess of things.

What’s your take on the online scene in NBA 2K? Do you feel that it’s a mess, and if so, would you agree that these are the reasons? Do you see entirely different problems when it comes to the connected modes? Have your say in the comments below, and as always, feel free to take the discussion to the NLSC Forum! That’s all for this week, so thanks for checking in, have a great weekend, and please join me again next Friday for another Five.

Last edited 1 month ago by MichaelTheGOAT

Ah, definitely. That doesn’t help the scene at all.

The Playground is so bad I mute the TV (I wish there was a way to just disable player chat so I could still enjoy the court ambience and hear the shot-clock, but I play better when I’m not being held under a microscope); it’s just festering with junior and high school kids living in the era of ego… as an adult I’ve tried to distance myself so much from that.

If you bring up the list of players during Playground and Rec games, you can mute them individually. I’ve done that on plenty of occasions, when kids get mouthy on the open mic. On PlayStation 4, if you’re in a party chat, you also block out the open mic automatically. That’s another workaround on PS4; start a private party chat where you’re the only one in there, and you’ll never have to bother muting players manually.

Last edited 1 month ago by MichaelTheGOAT