Welcome to this week’s edition of The Friday Five! The Friday Five is a feature that I post every Friday in which I give my thoughts on a topic that’s related to NBA Live, NBA 2K, and other basketball video games, as well as the real NBA, and other areas of interest to our community. The feature is presented as either a list of five items, or in the form of a Top 5 countdown. This week’s Five is a countdown of the Top 5 announcers in basketball video games.

It’s been almost a year since I did a Top 5 countdown in The Friday Five. Seeing as how it’s one of the reasons this feature is The Friday Five, it’s time to remedy that. This time, I’m counting down the Top 5 Announcers in all of basketball video games, meaning both sim and arcade titles. I’m also featuring announcers who call real NBA games and voice actors who have provided commentary over the years. If that isn’t already a spoiler, yes, legendary voice of NBA Jam Tim Kitzrow is on the list. The question is: who are the other four announcers?

For that matter, what makes a great announcer in a basketball video game? In a sim game, it usually means authenticity in replicating a broadcast, from play-by-play to colour commentary. Conversely, arcade games benefit from commentary that isn’t as focused on play-by-play, but rather exaggerated reactions and catchphrases. The announcers play a key role in establishing the overall atmosphere and vibe of a hoops title, which goes a long way in getting us hooked and keeping us engaged. Obviously countdowns like this are always subjective, but I’d suggest that thanks to these five announcers, our experiences on the virtual hardwood have been greatly enhanced. 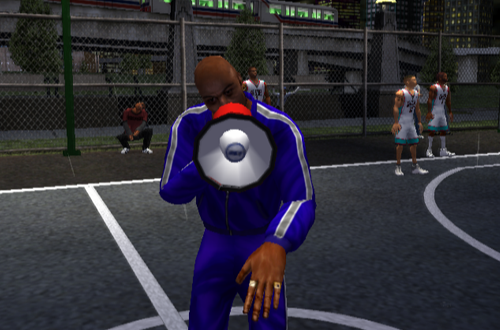 Let’s tip off this countdown with Bob Elliott, the colour commentator alongside the late Don Poier in NBA Live 2001 to NBA Live 2003. Elliott replaced Reggie Theus in the analyst’s role, and man, was he a huge improvement! Theus’ lines were quite generic and added very little to the presentation; in contrast, Elliott’s delivery was far more enthusiastic, and he offered up more insight. He didn’t just sound like he was reading the lines, but actually reacting to the action and taking an interest in the game. He wasn’t an NBA analyst as Reggie Theus was for a time – I have to correct myself from an earlier article – but he still brought an authentic basketball voice to the booth.

Speaking of that article, Bob Elliott’s most memorable role with EA Sports arguably wasn’t as Don Poier’s partner in NBA Live, but that of Joe “The Show” Jackson in the original NBA Street. Under the guise of Joe “The Show”, Elliott served as the host of NBA Street, guiding gamers through the menus and tutorial, and commentating on the action. Not many basketball video game announcers have lent their voices to both arcade and sim games, or for that matter, served as both colour commentators and the play-by-play man. Bob Elliott and Joe “The Show” Jackson were replaced in NBA Street Vol. 2, but nevertheless, I’d rate him as one of hoops gaming’s best announcers. 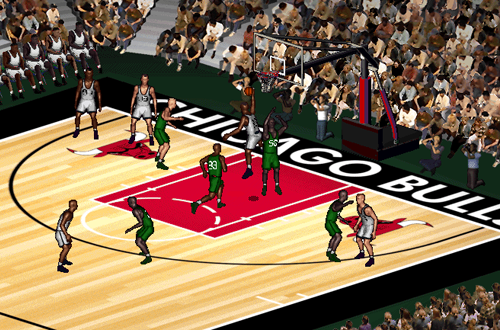 The two NBA games by Microsoft that I’ve played, NBA Full Court Press and NBA Inside Drive 2000, are fairly mediocre releases. They do have one really good thing going for them however, and that’s the commentary of Kevin Calabro. The former voice of the now-defunct Seattle SuperSonics, Calabro’s voice can be heard on so many highlight clips featuring Shawn Kemp and Gary Payton. His play-by-play style is famous for substituting more colourful verbs and adjectives to describe the action, as well as creative similes. Describing tight defense as a player being “on (his man) like a bad suit” is just one example of the creative catchphrases he’s known for.

That phrase does make an appearance in NBA Full Court Press, and as I said, his commentary is one of the best parts of an otherwise mediocre-at-best game. NBA Live didn’t feature play-by-play commentary until the following year, and with all due respect to Verne Lindquist, it wasn’t as memorable as Kevin Calabro’s announcing in Full Court Press. With his style, Calabro is probably one of the rare NBA announcers who could feasibly provide commentary for both sim and arcade titles, and be a good fit for either. The fact that he’s a distinctive voice from the 90s doesn’t hurt as far as my ranking is concerned, but that aside, it’s a shame he hasn’t done more video games. Despite the lack of any official network branding, NBA 2K’s presentation is basically the NBA on TNT. That makes it some of the best in the genre these days, and it starts with Kevin Harlan. The long-time NBA announcer has lent his voice to the NBA 2K series since 2005, and as the game’s production values have continued to improve with each generation, his vocal talents are even more appreciated. It’s difficult for the commentary in basketball video games to not sound repetitive after a while – there are only so many lines that announcers can record, after all – but Harlan’s performance manages to stay relatively fresh, even playing a full season on twelve minute quarters.

It helps that there’s a rotating third voice in the virtual booth in recent NBA 2K titles, but apart from Mike Breen, I can’t think of anyone else I’d rather have doing play-by-play in a sim game. As it stands, Harlan’s performance in NBA 2K is superior to Breen’s commentary in NBA Live 14 through 18, being far more animated and with less dead air. His reactions to highlight plays sound very authentic and his great chemistry with all of the other announcers makes 2K’s commentary sound incredibly natural and organic. That isn’t easy to do in video games because of the repetition, and while credit must go to the audio engineers, Harlan’s performance is a major factor. Still calling NBA games as the lead announcer for the NBA on TNT, Marv Albert isn’t as popular or highly regarded as he once was. He’s still considered a legend among NBA announcers, but at the age of 78, he’s admittedly a little past his prime. With that being said, if you grew up watching the NBA in the 90s, he was the voice of the league, his distinctive calls accompanying many of the most memorable moments from a golden era in basketball. Indeed, if you go back and look at the early Wishlists here on the NLSC, you’ll see that “get Marv Albert to do commentary” was a popular wish year after year, as we wanted him on the call on the virtual hardwood as well.

Marv first lent his vocal talents to NBA Jam Extreme, Acclaim’s first NBA Jam title that wasn’t nearly as well-received as the original efforts by Midway. On top of the game being a letdown, Marv’s style wasn’t quite right for the arcade genre (more on that in a moment). When EA Sports brought him in to do commentary beginning with NBA Live 2004, it greatly enhanced the presentation and broadcast feel. Whether alongside long-time partner Mike “The Czar” Fratello or Steve Kerr, Marv Albert’s performance brought authenticity, recognition, and years of experience in the booth to EA’s game. Is he one of the best announcers in basketball gaming? In a word: YES! Who else could it be but Mr Boomshakalaka himself? Look, I’m obviously very biased with this pick as Tim was kind enough to join the NLSC Podcast for an interview earlier this year, and like a lot of 90s kids who grew up playing hoops games, I have a lot of nostalgia for NBA Jam. However, I defy anyone who has played NBA Jam to argue that Tim Kitzrow isn’t one of the best announcers we’ve had on the virtual hardwood. His voice: iconic. His catchphrases: legendary. His comic timing and performance: masterful. There’s a reason that NBA teams bring him in to narrate highlights and participate in events live at their arenas: he’s that damn good.

Beyond the distinct voice and memorable catchphrases – from “He’s On Fire” to the aforementioned “Boomshakalaka” – the collaborative efforts of Tim Kitzrow, Mark Turmell, and the rest of the NBA Jam team defined the sound of arcade basketball games. The genre doesn’t need strict play-by-play commentary, and definitely doesn’t need subdued calls by the announcers. Arcade hoops titles are over the top, so the commentary should also be excitable and impactful while also not taking itself too seriously, pumping us up to play in a fun atmosphere. No one has done it better than Tim Kitzrow, whose contributions to basketball gaming are undoubtedly On Fire.

That’s my list, but who are your Top 5 announcers in basketball games? Would any of these names make the cut? Have your say in the comments section below, and as always, feel free to take the discussion to the NLSC Forum! That’s all for this week, so thanks for checking in, have a great weekend, and please join me again next Friday for another Five.