1. From Mo-Cap to Executive Producer 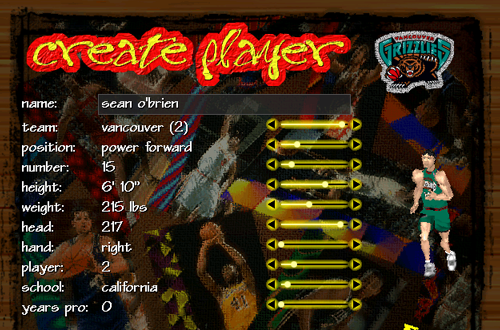 Sean O’Brien has a long history with the NBA Live series. Until recently he served as the game’s Executive Producer, taking on the challenge of reviving a series that has had its fair share of struggles over the past decade or so. I would suggest that under his leadership, the series established a solid foundation that Seann Graddy and the rest of the team can continue to build upon. However, long before Obes was calling the shots, he was mo-capping them. Sean’s tenure with the NBA Live series began as a member of the motion capture team for several of the early games, before he finally became a producer on later titles (and ultimately, the Executive Producer).

It’s his early work as a mo-cap talent that landed him a cameo in NBA Live. He’s one of several members of the NBA Live team that can be unlocked via entering their names in NBA Live 97’s Create-a-Player. Doing so automatically sets his appearance, bio data, and ratings. He’s a 6’10” power forward with some pretty decent ratings, so if you’re looking to create a developer team, he’s not a bad choice. Sean is also available to unlock in NBA Live 98, which he also provided mo-cap for. I had a chance to meet Sean at an NBA Live 16 community event, making him the only developer that I’ve met in person, interviewed on the NLSC Podcast, and played with in a video game! 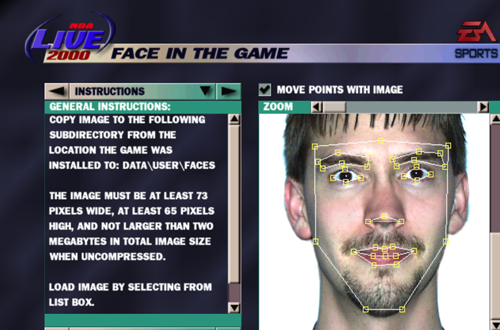 Speaking of people who go way back with EA Sports, a name that older basketball gamers may recall seeing in NBA Live’s credits is Rod Reddekopp. The Lead Programmer on those early NBA Live games – a position that earned him the in-game nickname of “Leerless Feeder” (an obvious pun on “Fearless Leader”) – Rod’s virtual self is playable in several games with unlockable developers and developer teams. Indeed, he’s a beast in NBA Live 98, where all of his ratings are maxed out at 99. For those keeping scoring at home, that makes him superior to the player that many still consider the Greatest of All-Time: the one and only Roster Player.

However, it’s not his unlockable player that I’ve chosen for this list, but rather another example of him putting his face in the game; literally! Long before face scans, we were able to use a photo to add a face to created players in NBA Live 2000 and NBA Live 2001 PC. The process required a good, head-on photo, and proper selection of facial features. Four example photos were included on the disc to demonstrate how to use Face in the Game, and one of them was Rod (Example 2, to be precise). As such, even though the developer teams had been removed by NBA Live 2000, we could still add EA Canada’s Leerless Feeder to the roster, face and all. 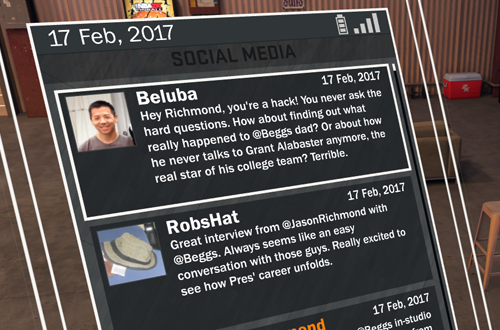 As noted in this week’s Wayback Wednesday, several NBA 2K developers have had cameos as members of unlockable bonus teams. You’ll also encounter their names being used for generated rookies, fictional coaches in MyLEAGUE and MyGM, and various high school and college players in the MyCAREER stories. And speaking of MyCAREER, many of them will also show up in your social media feed with their actual handles and avatars, commenting on recent events and performances. Now, you might expect me to include my good friends and NLSC alumni JaoSming and Leftos here, but I’m going with Gameplay Director Mike Wang, aka Beluba. Sorry guys!

You see, while it is fun to see JaoSming and Leftos talking about my MyPLAYER on the in-game Twitter, it’s Beluba that provides more explosive commentary. During the story in NBA 2K17’s MyCAREER, your player has an interview with the host of :24, Jason Richmond. Beluba doesn’t care for the interview though, calling Richmond a hack who doesn’t ask the tough questions. He wonders what actually happened to your father (who passed away several years ago), and claims there’s a rift with college teammate Grant Alabaster (describing him as the real star). Yikes! Kind of harsh there, Beluba! Of course, it does perfectly encapsulate Twitter’s toxicity. 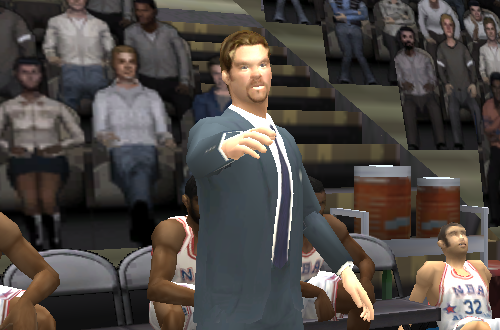 For those who are unaware, I’m not the original founder or webmaster of the NLSC. I’m actually a horse a magic man the second permanent admin, after the site was founded in 1996 by Tim, Lutz, and Brien. Their outstanding work not only made the NLSC the place to go for NBA Live content, but caught the attention of EA Sports. Tim would go on to be hired by EA – that’s how I came to run the site – and made some outstanding contributions to the series from NBA Live 2001 through NBA Live 07, including the ability to have less than twelve active players and disable automatic reordering (Tim did collaborate with Lutz on the original NLSC rosters, after all).

Tim’s tenure as a developer also led to some in-game cameos. After appearing on the press row, Tim got even closer to the action as he donned a suit and took his place as the unnamed coach of the 70s All-Stars in NBA Live 2003 and NBA Live 2004. His surname was also entered into the pool of names for generated rookies, and I recall it being used for several second round rookies that I either considered or ended up drafting. These days, content creators have a lot of contact with the developers and even enjoy some cameos in basketball games, but back then it was great to see one of our own join the NBA Live team, and subsequently enjoy a few cameo appearances. 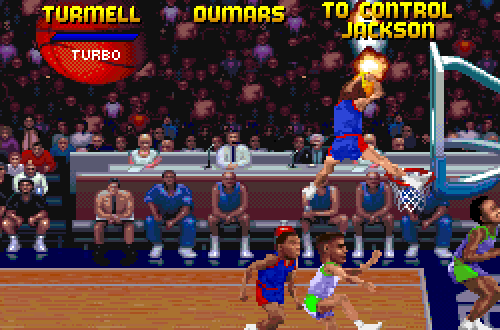 If you create the most iconic arcade basketball game series in history, you deserve to have a cameo in it, right? NBA Jam is well-known for its use of mascots, celebrities, and even politicians as secret players, but several Midway staff members are also playable. This includes creator Mark Turmell, who can be unlocked via codes in the original NBA Jam and NBA Jam Tournament Edition, as well as later games in the Jam lineage such as NBA Hangtime and NBA Showtime: NBA on NBC. After you defeat all 27 teams in NBA Jam Tournament Edition, he’ll also randomly show up alongside the other secret characters as an opponent.

Per The Cutting Room Floor, all secret players in NBA Jam TE have the same ratings, except for Mark Turmell and Jay Moon. Turmell has ratings of 10 for Speed, Three-Pointers, and Dunking, 9 for Passing and Power, 8 for Blocking and Clutch, and 6 for Stealing. Although all secret players are tough opponents with those same ratings for Speed, Three-Pointers, Dunking, Blocking, Stealing, and Clutch, Turmell’s Passing and Power make him even more difficult to face (or even more OP to play with). For his impact on the virtual hardwood, and appearances that predate all other developer cameos on this list, Mark Turmell in NBA Jam gets the top spot in the countdown.

What are some other developer cameos in basketball games that you found fun and amusing? Have your say in the comments below, and as always, feel free to take the discussion to the NLSC Forum! That’s all for this week, so thanks for checking in, have a great weekend, and please join me again next Friday for another Five.

There it’s in NBA Live 96 a guy name Chow, you put that name and then you got a center with every stats 90 above!!!

Yep, he’s one of the developers.