The City Revealed for MyCAREER in NBA 2K21 Next Gen 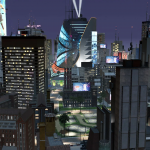 Following on from previous hints that The Neighborhood would be done away with in NBA 2K21 Next Gen, the latest developer blog has revealed that The City will be the new hub in MyCAREER. Suffice to say, it expands upon the previous concept in a big way, with a significantly larger map.

Park Affiliations are back, with the North Side Knights, South City Vipers, Beasts of the East, and Western Wildcats representing the four boroughs of The City. Each borough has a Mayor, which will be an influencer from the community. New stores have been added, along with a Black Mamba Court, expanded Gatorade Gym, and the brand new Event Center. All gamers will get a free skateboard, and there will be plenty to interact with, including NPCs that give out “quests”.

I’ve summarised the blog below, but for the full scoop, be sure to give it a read. A trailer has been released, which you can also watch below. Got any thoughts? Add them in the comments, or join in the discussion here in the Forum!

Welcome to The City Trailer

What The Blog Tell Us

Once again, share your thoughts in the comments below, as well as here in the NBA 2K21 section of the Forum.