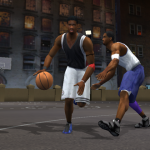 If you’ve listened to some of the recent episodes of the NLSC Podcast, you may recall us talking about mini-games and how they helped create well-rounded basketball video games, with a variety of experiences on offer. If nothing else, they provided us with something to play when we didn’t feel like diving into a full length game, or we just had a few minutes to kill.

It remains to be seen whether that kind of content will make its way back into the NBA Live and NBA 2K series, though you’ll certainly find mention of it in our Wishlists. In the meantime, we can reflect on some of the most enjoyable bonus experiences in previous releases, which is what I’m doing this week as I list what I feel are the five best mini-games in basketball video games. Technically speaking, All-Star Weekend is a game mode that’s made up of what could be considered a few different mini-games, namely the events from the annual NBA All-Star Weekend. However, in that respect I feel it still counts and the All-Star Weekend mode featured in NBA Live 2005 through NBA Live 09 is definitely worth talking about.

Forget the Guitar Hero dunk contest and buggy three point shootout in NBA 2K13 and NBA 2K14; this was the All-Star Weekend done right. The dunk contest controls had a learning curve, but were still intuitive, allowing you to pull off a variety of slams in a satisfying manner. The three point shootout was more or less perfect, with a few different camera angles and no major issues as far as I can recall. Throw in the All-Star and Rookie Challenge games, complete with the ability to throw alley-oops off the glass (admittedly at the expense of off-ball control), and you’ve got a great collection of mini-games that also rounded out the Dynasty Mode experience. A spin-off of All-Star Weekend mode, the Freestyle Challenge is arguably an underappreciated mini-game. It doesn’t seem to be discussed very often so I’m guessing it wasn’t all that popular, which makes it kind of difficult to champion its comeback should All-Star Weekend eventually return to the NBA Live series. Having said that, I don’t think it’d be a bad idea to bring it back alongside the Weekend, for the sake of adding a little extra content to the game.

While the standard dunk contest and three point shootout both serve as fine mini-games, the Freestyle Challenge was an effective means of utilising their assets to create a quick, single round version of both events. The Slam Dunk Showdown was a little more creative, being a freestyle dunking exhibition with a target score, while the Three Point Showdown was simply a single round of the regular shootout. Nevertheless, they both added a little more depth to the choice of game modes in NBA Live, and were solid mini-game concepts. A sim NBA title’s success is ultimately determined by the quality and depth of its five-on-five gameplay and main game modes, but one-on-one play is unquestionably a big part of basketball culture at all levels of the game. When a One-on-One mode was added in NBA Live 2000, basketball gamers welcomed it with open arms. Not only could we play one-one-one grudge matches featuring any of the current NBA players, we could also “settle” some historical debates with the new roster of legendary players that likewise made its debut in NBA Live 2000. Defeating Michael Jordan in the mode was also the method of unlocking him in the Nintendo 64 version of the game.

NBA Live 2003 might have seen the peak of the mode, however. While NBA Live 2003’s gameplay wasn’t tuned towards simulation play as much as most gamers would have liked, it suited the pick-up atmosphere of One-on-One mode quite well. The game also offered three different venues for one-on-one match-ups: an empty practice gym, an urban street court, and a beachside blacktop. One-on-One mode was perfect for a quick game of hoops and following its absence from recent releases, it has once again become a popular staple of the Wishlist. Currently a bit buggy and certainly a shadow of its former glory, Blacktop mode once boasted its own dunk contest, exclusive dribbling moves, and different game options from two-on-two up to five-on-five, for a respectably deep and well-rounded streetball experience within an NBA sim. It remains to be seen whether some of that depth will return, especially with the launch of The Park in NBA 2K14, but over the years Blacktop has provided basketball gamers with a refreshing change of pace and some fun mini-games. I’m rounding out this list with a mini-game from EA Sports’ 2010 reboot of NBA Jam, which is a game that I feel is a little underrated and underappreciated due to the controversy surrounding NBA Elite 11. In any case, NBA Jam featured some fun mini-games in the form of the boss battles and different challenges in its Remix Tour mode, but for me, Backboard Smash is far and away the best.

Simply put, you’re trying to break your backboard before your opponent breaks theirs. Jumpshots and layups raise the damage meter a little, but dunks obviously get the glass flying a lot sooner. It’s implemented as both a two-on-two game and a one-on-one halfcourt boss battle with Shaquille O’Neal, but either way, it’s a lot of fun. I mean, come on, it involves shattering the backboard in spectacular fashion. Isn’t that always impressive to see?

That’s a wrap for this week. What are some of your favourite mini-games in basketball titles? Let me know in the comments below and as always, feel free to take the discussion to the NLSC Forum! Thanks for checking in, please join me again next Friday for another Five.

Backboard smash was awesome, played it a bunch on the Wii.
I guess it doesn’t quite fit the needed description of a mini-game, but no BIG Moments/Situation Mode from 2K? NBA Street vol. 3’s dunk contest was something special too.

Ah, good point. For some reason I didn’t think of BIG Moments, despite the fact that I really like the concept and hope that EA keeps it in future NBA Lives. Tough call as to which one I’d nudge off the list to get it on there, but I should have at least mentioned it, given how much I’ve enjoyed it.

Nice but you’re missing the dunk contest from NBA Street 3.

I actually didn’t play NBA Street V3, so I’m not familiar with it. I might have to go back and check it out though.