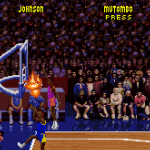 Since I’ve previously looked at some of the most unstoppable moves in basketball video games, this week I thought I’d take a look at some of the best power-ups that we’ve seen in virtual hoops. Generally speaking, power-ups are probably not a concept that most people associate with basketball video games. However, they do have a presence in the genre, mostly in arcade-oriented titles but also in more subdued forms in certain sim releases.

As I’ve mentioned before, while I want to get a sim experience out of the NBA Live and NBA 2K series, I also enjoy arcade style basketball games for a change of pace. Having some fun and crazy power-ups certainly adds to the arcade experience, and special abilities in general make games more interesting and varied. So, without any further ado, here are my picks for the five best power-ups in basketball video games. Probably the most famous power-up in basketball video games and arguably the best, NBA Jam’s Fire is simply iconic. Accompanied by Tim Kitzrow’s excited call of “He’s on fire!”, Fire gives us the memorable sight of a flaming basketball, trails of smoke, and scorched nets. It also has a practical use of course, with players gaining better shooting abilities while on fire, as well as unlimited turbo and the ability to goaltend without a violation. Other basketball titles have borrowed the concept of players receiving a small ability boost if they make three shots in a row without the opponent scoring, including some of the early NBA Live games, but none did it with the flair of NBA Jam.

In NBA Hangtime and NBA Jam: On Fire Edition, the concept was taken to the next level with the addition of Team Fire, attained by completing three consecutive alley-oops without the opponent scoring. Single player fire can easily be lost on the very next play, but Team Fire allows both teammates to remain on fire even if the opponent scores, lasting for 24 seconds with the timer only counting down while on offense. Straightforward yet powerful, Fire in both its forms has been a big factor in NBA Jam’s success and popularity for over two decades. What else can you say, but BOOMSHAKALAKA! Mentioning cheats when talking about the best power-ups in any video game is…well, a cheat, but I have to bring them up here as they were actually a big part of playing NBA Jam Tournament Edition on Super Nintendo with my friends back in the day. Our house rules were basically as follows: cheats are acceptable if both players agree to them, but both players need to use them and if one player isn’t able to enter any codes properly, the game must be restarted. That way, we had an even crazier game, but retained a level playing field.

The only two cheats you needed to enter were Always on Fire (because, well, see above) and “Dunk from anywhere”, which absolutely meant the backcourt as well. You might think that would result in nothing but dunks right off the inbounds pass – and there would be plenty of those when we played – but the game balanced things out with randomly missed dunks, and mixing things up with three pointers made a dunks-only strategy impractical. A quick enough shove could also knock your opponent out of the air before they got high enough to leap the length of the court for the dunk, so the games were certainly still competitive.

And yes, just as I can remember enough of the bonus barrel locations to finish Donkey Kong Country 2 with around 80% completion, I can tell you that the “Dunk from anywhere” code for NBA Jam TE on SNES is Left-Right-A-B-B-A, without having to look it up first. JaoSming is usually the guy that’s talking about NBA Street, but I’ve also enjoyed the Street games in years gone by. In fact, I actually got a sneak peek at Homecourt during the NBA Live 07 Community Event back in 2006, which was pretty cool. NBA Jam’s Fire may be more famous in gaming culture, but NBA Street’s Gamebreakers are definitely worth a mention, as they are usually accompanied by some snazzy cinematic effects when they’re activated. They’re not just for show, however.

For the uninitiated, Gamebreakers are earned by performing dribbling tricks to fill up a meter, and then activated by hitting both triggers when the meter is full. You then have a limited amount of time to make use of the Gamebreaker, which lives up to its name by adding extra points to the next shot you make, while subtracting the same amount of points from your opponent’s score. A useful power-up with cool presentation, the Gamebreaker certainly belongs on this list. Although it isn’t a power-up in the strictest sense of the term, Freestyle Superstars is always worth mentioning when we’re talking about boosting player abilities in basketball video games. Freestyle Superstars was actually intended to be a sim-oriented feature, providing differentiation between stars and regular players, while also being a step towards adding signature moves. It was a good idea in theory, but it didn’t work out as well as most of us would have liked, as the moves tended to be too powerful.

As I’ve mentioned before though, it was very handy when dealing with the CPU’s comeback logic, with Outside Scorers being very dependable offensive threats due to the fancy layups in their movesets. NBA Live 07 also featured an interesting expansion of the concept in the form of X-Factor players: borderline stars who would gain lower-tier Freestyle Superstar moves if they were having a good game. As far as powering up players is concerned, Freestyle Superstars was a fairly realistic approach and a concept that had merit, though it ultimately gave way to superior methods of player differentiation and signature styles.

5. All the power-ups in Incredibasketball I’ve mentioned this game before, along with International Basketball 2009 by the same developer. They’re very flawed (but still reasonably fun) five-on-five basketball games, both featuring international teams comprised of fictional players, with Incredibasketball taking a more arcade-style approach in its gameplay. In a nutshell, all of the standard basketball rules are still in effect, but power-ups randomly appear on the court, giving players special abilities.

For example, there’s a jetpack power-up that allows you to dunk from much further out. There’s also a power-up that gives you giant hands, making it easier to block shots, deflect passes, and steal the ball. You can even freeze opponents and put a lid on their basket, preventing them from making any shots until it disappears. These are some fun ideas for an arcade basketball game that I’d actually like to see put to use in a better release. As it stands, they spice up a title that’s fairly average at best, but was worth checking out for a couple of bucks.

That’s going to do it for this week. What are some of your favourite power-ups and special abilities in basketball video games? Let me know in the comments below and as always, feel free to take the discussion to the NLSC Forum! Thanks for checking in, please join me again next Friday for another Five.