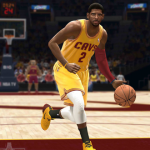 In last week’s Friday Five, I mentioned that I’d like to talk a little more about the positive things in NBA Live 14 and NBA 2K14 next gen, so that’s exactly what I’m doing starting this week. I was originally going to compile a list that covered both games, but I found that I couldn’t narrow my selections down to five. Therefore, this week I’ll be covering NBA Live 14, to be followed by a list for NBA 2K14 next Friday.

It’s been said many times before, but it’s been a rough comeback so far for NBA Live, with NBA Live 14 receiving some scathing reviews from the gaming media and basketball gamers alike. However, the game has also shown potential and some minor improvements following the first title update, with more fixes on the way. While there’s still a long road ahead, I’ve recently been enjoying spending some time with the game and as such, I’ve compiled a list of what I feel are the five best things in NBA Live 14. NBA Live 14’s Dynasty Mode is fairly robust, though there’s more that can (and should) be done with it moving forward. Rising Star looks pretty bare bones compared to NBA 2K’s MyCAREER, but it was important that the series debut a single player career mode and as it stands, it’s a solid foundation to build upon. Ultimate Team is also fun and certainly deserves an honourable mention here.

The best, most innovative concept as far as NBA Live 14’s modes are concerned, however? The expansion of LIVE Season, along with BIG Moments.

Granted, the lack of updates since December has taken some of the shine off the mode, but it’s a great concept. The ability to replay specific games through LIVE Season, similar to Dynamic Season in NBA Live 10, is already a fun idea. But to also be able to play out scenarios from the real NBA season, from gamewinning shots to memorable five minute stretches to a statistically significant quarter? That’s very cool, not to mention an excellent way of getting some quick games in. On top of everything else, it garners XP to level up and earn packs for Ultimate Team. Fantastic idea. At long last, EA Sports’ partnership with ESPN has been put to optimum use in an NBA title. NBA Live 14 represents an NBA on ESPN broadcast very accurately, from artwork to camera cuts to music. They’ve really stepped things up with the pre-game, halftime and post-game shows hosted by Jalen Rose and while there are a few glitches with Mike Breen and Jeff Van Gundy’s commentary, overall the in-game presentation is quite well done and an effective use of the ESPN license.

I’m also really liking what they’ve done with the frontend menus, which are both visually appealing and easy to navigate. The tiles approach to user interfaces is becoming quite popular and EA Sports has used it very effectively. I’m also pleased to see that the PAL version of the game has avoided using metric measurements for players, instead representing heights in feet and inches and weights in pounds, as you’d expect from an NBA game. That was one of my pet peeves with the PAL version of the last few NBA Live titles, so I’m glad to see that it hasn’t been repeated in NBA Live 14. While I’ve been having some fun playing NBA Live 14 as of late, I’m certainly not about to deny that there are issues with the gameplay that need to be fixed. Indeed, we’re currently compiling a list of them here in the Forum, so that the development team has some quality, constructive feedback for the upcoming patches. The game does have its good moments here and there, but if I had to pick the best element of gameplay, it would have to be the control scheme.

While the controls do feel a bit stiff at times and the animation quality doesn’t help matters, I feel that NBA Live 14 really got something right by going back to a control scheme that has worked out so well for the series in the past. It features the approach to right stick dribbling controls that I like and even though the current animations don’t always look right, the methods of performing different moves is intuitive and uncontrived.

I expect some tinkering to be done with the controls in the future – adding expanded controls for offensive rebounding similar to the old Freestyle Air concept would be one suggestion worth mentioning here – but I believe that this is basically the control scheme that NBA Live should have. This may seem like an odd feature to single out as one of the best things in the game, but it’s one of those ideas that’s so simple, yet brilliant. Again, NBA Live 14’s animations do need improvement and there are definitely moments in the game where the action doesn’t look so great. However, when something cool happens that you do want to watch again, it’s extremely convenient to be able to click the right stick and immediately check out an instant replay.

It reminds me of the Freestyle Superstars replays in NBA Live 06 PC, albeit with better presentation and without the restriction of only being available for players with special abilities. It’s nice that the traditional Instant Replay function is still there and it’s not like it’s a huge hassle to pause the game to watch a play again, but it’s great to be able to trigger an instant replay so seamlessly and without interrupting the flow of the game. It may be a minor feature, but I really like that they’ve added it. I’m wrapping up this list with another small feature, but it’s one that’s great for Dynasty gamers. With the Accelerated Clock option, it’s possible to play 12 minute quarters in a fraction of the time. Needless to say, this is a very useful feature for those of us who don’t always have the time to play full length games, but want to have accurate minutes per game statistics in Dynasty Mode. Additionally, if you feel that the scores are a bit high when playing on 12 minute quarters, an accelerated clock is a handy solution for that issue as well.

One minor drawback is that the accelerated clock is perhaps a little too fast, resulting in scores that are a little too low for 12 minute quarters…at least in my experience. As Pdub has noted in the aforementioned feedback thread in the Forum, it would be handy to be able to adjust the speed of the accelerated clock, in case the individual user would prefer it to run a little faster or slower. As it stands though, it’s a very welcome addition to the game and one that I hope is retained.

That’s going to do it for this week. I’ll be talking more about NBA Live 14 in my full written review but in the meantime, what are some of the more positive aspects of the game that stand out to you? Let me know in the comments below, as always feel free to join in the discussion in the NLSC Forum, and don’t forget to add your constructive feedback for the developers in this thread. Thanks for checking out the Five, please join me again next Friday for the five best things in NBA 2K14 next gen.

Of a Control: uncomfortable poke R3 for the post (in 2K and everything clicked Y), respectively uncomfortable to play through bigman.

A couple of times I have found myself pressing Triangle out of habit from NBA 2K, but I don’t mind using the right stick to post up. I guess I’m used to it from previous NBA Live games.

Biggest issue I have with the controls is having to take my left thumb off the left stick to do playcalling while dribbling up the court. Works fine standing still, but I would have preferred a double tab of the LB/L1, or something else.

BIG Moments are fine until you do a long player lock one. Then any of the good game mechanics are just ruined.

My top 5 would include the presentation and menus, Ultimate Team, the adaptive AI, gameplay that rewards getting open, and either the replay or XP systems.

That’s a fair point about playcalling as well. I suppose it’s another thing that I’m used to from playing NBA Live 06 PC so much back in the day, but yeah, it does break the flow a bit to have to do that.