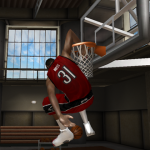 Since the 2014 All-Star Weekend in New Orleans is upon us, I feel it’s only right that this week’s Friday Five covers a topic related to the NBA’s midseason classic. Since I talked about the things that I believe the dunk contest needs as well as my five favourite All-Star Weekends in the lead up to last year’s All-Star Weekend, this year I thought I’d mix things up a bit with a topic that combines video games and real life.

The addition of the All-Star Weekend in NBA Live 2005 was a definite highlight in the NBA Live series, finally bringing an often requested and long awaited mode to the game. The dunk contest that was featured from NBA Live 2005 through NBA Live 09 included some crazy slams; a few of them were a little out there, but others could feasibly be pulled off in real life. This week, I’m listing five dunks from NBA Live’s Slam Dunk Contest that I’d like to see broken out in the real competition. Easier said than done, right? To pull this one off, a player is going to need great hops, deft hands and quick reflexes. It might seem like something that can only be done in a video game, but this attempt by Air Up There suggests that it is actually possible in real life. The 360 on top of it is a bit ambitious, but I suppose that’s probably the next logical step once it’s been done.

The standard between-the-legs dunk is hardly a basic or boring slam, but we have seen it before and at this point, it’s no longer a contest clincher. If someone can put the ball between their legs twice before throwing it down, however? The competition is theirs and they’ll have a strong candidate for Best Dunk Ever. At the very least, it’ll make a lot of top ten lists. As for NBA Live, this was probably one of the easier “guaranteed 50” dunks that you could perform. I’m fairly certain that this one hasn’t been successfully performed in the NBA dunk contest. I do recall a couple of players attempting a 360 between-the-legs but ultimately having to abandon it because it just wasn’t happening and the timer was running out on them. Feel free to correct me if I’m wrong about that but in any event, here’s Air Up There to show us that it can be done.

The 360 between-the-legs actually isn’t too hard to perform in NBA Live – even off the lob – at least compared to a couple of the other dunks that I’ll get to in a moment. It may not be the most accurate representation of its difficulty in real life, but clearly the dunk is possible and I believe that there are players in the NBA who could do it. It’d be awesome to see one of them break it out one of these years.

3. Anything fancy off the lob, caught on the full While I’ll admit that they have their place and aren’t too bad in moderation, generally speaking I’m not a fan of the gimmicks that have become commonplace in the dunk contest in recent years. I’d much rather see creative new variations and combinations of previous ideas; remixes, if you will. A few years ago, I would’ve suggested a honey dip off the lob, but then Blake Griffin actually went and did that.

Instead, I’ll suggest performing some of the old standards – windmills, 360s, between-the-legs and so on – off the lob, but caught on the full rather than letting the basketball bounce off the floor. If you’re having trouble picturing what I’m talking about, watch this fake video of John Wall catching a full court alley-oop from himself. I think it would be awesome to see a player stand 15 feet or more out from the hoop, lob the ball, go after it, get it before it hits the ground and then finish with something spectacular. It would be an impressive display of speed, timing and creativity. Reverse dunks always look pretty cool in general, especially when there’s a 180 and a little gliding involved. Still, while such a jam may be likely to top a countdown of the day’s highlights in the NBA, it’s a little passé when it comes to the dunk contest. It needs a little more spice to take things to the next level…say, a 360 degree spin preceding it?

The 540 dunk is one of the toughest to pull off in NBA Live’s dunk contests, requiring precision in both the rotation of the left stick and the timing on the release of the trick button. It’s only fitting given the degree of difficulty in making the dunk in real life, but as T-Dub of Team Flight Brothers demonstrates, it’s not impossible. If we see it in the NBA contest, the bar will definitely have been raised. Of course, if we’re talking about the 540, we might as well add another 180 degrees and bring the 720 dunk into the conversation. For my money, this is the toughest dunk to perform with any kind of consistency in NBA Live and like the 540, it stands to reason. Needless to say, it’s far from an easy dunk for anyone to pull off in real life, but once again Air Up There has proven that it’s not merely a video game fantasy.

Throughout the years, the dunk contest has exhibited a lot of slams that have been spectacular combinations of athleticism, grace, power and creativity. We’ve seen players show off incredible hangtime by leaping from the free throw line, explosive hops by jumping over teammates and other obstacles, and great body control as they contort themselves and perform a variety of tricks with the basketball. We haven’t seen that in the form of a 720 dunk yet – at least in the NBA contest – and that really would be something. A stadium of 20,000 people holding up 10s might not be enough.

That’s all for this week. What are some of the dunks you’ve seen in video games that you’d like to see performed in the real dunk contest? What are some of your favourite dunks to perform in video game dunk contests? Let me know in the comments below and as always, feel free to take the discussion to the NLSC Forum. Thanks for checking in this week, enjoy the 2014 All-Star Weekend and please join me again next Friday for another Five.

McLemore is considering attempting the 720 this year – http://probasketballtalk.nbcsports.com/2014/02/08/ben-mclemore-may-attempt-a-720-dunk-in-the-slam-dunk-contest/?utm_source=dlvr.it&utm_medium=twitter

Ah, very nice. Would love to see it happen.