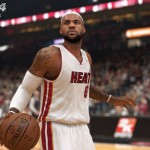 I finally got my hands on the PlayStation 4 in the early hours of this morning, thanks to a midnight launch. As such, I’ve finally been able to play NBA Live 14 and NBA 2K14 next gen. I intend on spending a lot more time with both games before posting detailed impressions and full reviews but for the moment, I’d like to share some early thoughts on both next gen basketball titles.

Before I go any further, I’d like to stress that I’ve spent less than a day with both games, so I will be going into more detail in the future. I also reserve the right to change my mind as I continue to notice the good and bad things in both games, as well as evaluate the changes and fixes made by patches that will come through in the near future. With that said, here are some of my early impressions of NBA Live 14 and NBA 2K14 on PS4, in five points.

1. NBA Live 14 has potential, but needs a lot of polish As NBA Live 14’s Executive Producer Sean O’Brien mentioned in his open letter to the community, it hasn’t been the comeback for NBA Live that they (and gamers like myself) were hoping for. While I think that some gamers and even certain individuals within the gaming media are too concerned with being snarky about the situation and have been a little superficial in their evaluation of the game, the bottom line is that the general reaction so far has been pretty fair; NBA Live 14 has a lot of issues.

I disagree with the suggestion that the engine needs to be scrapped, because scrapping everything and starting over from scratch is exactly what derailed the NBA Live series in the first place. It seems like the IGNITE engine is capable of doing some good things, but as it stands you can only catch glimpses of that. You could forgive a wonky animation here and there, but when the responsiveness is also lacking, it goes beyond a visual quirk and becomes something that affects the feel of the game.

I’m encouraged by the development team’s passion and commitment, not just in developing for the future but in addressing the issues with NBA Live 14. I’m interested to see what they can accomplish as far as tweaking the AI, improving the animations and making the game feel less stiff and unresponsive. Even though I do think there’s potential there, those fixes are essential if NBA Live 14 is to ultimately be a satisfactory release. I’m glad that EA Sports finally got a game out and honestly, I’m glad that they want to keep trying. Suffice to say however, it’s not the game I was hoping for.

2. NBA 2K14 next gen is polished, but not the leap I was hoping for In a way, I’m perhaps a little more disappointed in NBA 2K14 next gen than I am NBA Live 14, even though it certainly is the superior game. That’s mostly because NBA 2K is the benchmark for NBA sims and with all that the series accomplished during the previous generation, it’s set the bar very high. I was expecting a bigger leap on the new generation but unfortunately a lot of the issues that I’ve found frustrating in NBA 2K14 PC are present in the PS4 version of the game.

Before anyone readies their torches and pitchforks, let me state the obvious: NBA 2K14 on PS4 looks amazing. It’s also been built on a pretty rock solid foundation, so it plays a very good game of basketball (most of the time), its controls are functional – I still don’t love the Pro Stick, but it’s not as problematic as I’d feared it might be – the presentation is nice and more often than not, it delivers the goods as far as simulation basketball is concerned. I also feel that the controls are somewhat smoother and more responsive than the PC version.

However, a lot of annoyances from the previous generation are still present. Psychic steals are still an issue. The CPU seems to have a much easier time moving around the floor, grabs too many offensive rebounds, doesn’t always play fair and manages to get into the paint (and usually scores there) too easily and too often. CPU teammates help out your opponent by backing off them or simply stepping aside to let them score. Instant Replay is buggy. Like NBA 2K14 PC, it is a very good game on the whole, but I’m disappointed to see issues from NBA 2K13 still present and problems from the current gen engine in general making the leap to next gen.

3. Responsiveness, fluidity and balance is an issue for both games Responsiveness and fluidity are more of a problem in NBA Live 14, seeing as how NBA 2K14’s animations are far superior. As I mentioned before, beyond the animations looking a bit funky, NBA Live 14 also feels stiff. In short, the amount of fluidity in the gameplay isn’t a fair trade-off for the sacrifice in animation quality. That said, while NBA 2K14 both looks and feels better, it still has some clunky, out of control moments of its own. I still find myself wishing that I could move around as easily as the CPU does, which again is something that I hoped wouldn’t carry over from the previous generation.

In particular, I’ve noticed that blocking and rebounding in both games feels a bit awkward, sometimes even seeming to be predetermined. I believe both games are trying to do the right thing here in terms of physics and foot planting, which is fantastic of course, but something doesn’t seem quite right. There are times when I’m pressing jump to block or rebound and am definitely in a position to do so, yet there’s no reaction – or a very delayed reaction – from the player that I’m controlling.

It also feels like the balance is off between the CPU and user in general. In both games, it seems like the CPU can casually waltz into the lane as easy as it pleases, brushing off defenders or at least getting the foul call. At the other end, even weak defenders stick to you like glue and can get away with hammering you inside. I know that the CPU has to have some kind of advantage to keep up with a human player, but when it’s getting to the point of fake difficulty and unfair comebacks, it’s not an enjoyable experience.

4. It’s time to do something about free throw shooting I’ve never been a huge fan of the “hold shoot” method of free throw shooting. After playing NBA Live 14 and NBA 2K14 next gen, I feel that it’s time for it to go.

I will say that the method is better implemented in NBA 2K14. As in the past, there’s a flash in the player indicator that helps with the release window. NBA Live 14 has adopted a similar method to the one that NBA 2K has been using for a while now, minus the flash under the player. Unfortunately, that makes a method that already feels somewhat imprecise and limited seem even more random.

I’d much rather that they bring back the T-Meter, or develop a new, “next gen” method of shooting free throws. At the very least, NBA Live needs to have some kind of visual cue similar to NBA 2K’s indicator flash, but ideally both series will look to replace “hold shoot” with something a bit more sophisticated in future games.

Now, having said all of that…

5. I do actually think there’s good stuff in both games Looking back at my first four points, it probably sounds like I’m very down on both games. I guess that’s true to a certain extent, what with NBA Live 14’s shortcomings and me perhaps setting my expectations a little too high as far as NBA 2K14 is concerned, but it’s admittedly early days. There are patches to come, learning curves to overcome and quite a few things that I do like about both games already.

NBA Live 14’s control scheme is great, being familiar, functional and intuitive. I like the different levels of playcalling, the ESPN presentation is great (issues with the commentary aside), LIVE Season and BIG Moments are both fun ideas, Synergy still feels like the way to go and with more polish, it seems like it could be a solid basketball game, albeit not on the level of NBA 2K14. I hope that the forthcoming patches can address the game’s major issues in a satisfactory manner and I look forward to seeing what they can accomplish. I will however be spending more time with the game in the meantime, diving into Dynasty Mode and Rising Star while continuing to get a hang of the gameplay.

I’ll definitely be playing NBA 2K14 as well. While I’m disheartened to see issues from the PC, Xbox 360 and PlayStation 3 version carried over to the next generation, the gameplay still has all the stuff that has made NBA 2K such a great game these past few years. Hopefully, some of the more annoying issues will be fixed via patches in due time. I’m still not entirely sure about the new direction for MyCAREER, but I’m giving it a shot as a lot of work has obviously gone into it. I’ve yet to get into MyGM, but I’m certainly intrigued by it. My early impressions are somewhat tainted by issues that are longstanding gripes, but there’s certainly good stuff there that I’ll be looking at in more detail very soon.

That’s going to do it for now, but I’ll be sure to share more impressions very soon in articles, reviews and Forum discussions, as well as upcoming episodes of the NLSC Podcast. In the meantime, what are your impressions of NBA Live 14 and NBA 2K14 so far? Sound off in the comments below and as always, feel free to take the discussion to the NLSC Forum. Thanks for checking in this week, please join me again next Friday for another Five.