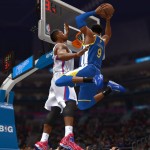 Having picked up NBA Live 14 and NBA 2K14 next gen last Friday, I’ve offered a few initial impressions of each game in both the Friday Five and the latest episode of the NLSC Podcast. I’ll continue to share my impressions of both games in the lead up to writing my full reviews, but this week I wanted to talk a little about some of the features that I believe NBA Live and NBA 2K need as we move forward.

While NBA Live 14 isn’t nearly as bare-bones as NBA Live 06 on the Xbox 360 and a lot of great work has gone into the features of NBA 2K14 next gen, there are a couple of staples of basketball gaming that are missing, as well as some other features that I’d like to see implemented. As such, this week I’m listing five features that I believe both games should add before we get too far into the new generation. Neither NBA Live 14 nor NBA 2K14 allow for the creation of players, outside of Rising Star and MyCAREER respectively. NBA Live 14 also does not offer any roster editing functions in general, which definitely came as a disappointment to many of us. NBA 2K14 does feature roster management tools and they are at least as deep as what’s on offer in the current gen version of the game, but unfortunately they’re a little more cumbersome to use.

It’s understandable that these features weren’t the focus as both games made the move to the next generation of consoles but moving forward, it’s an area that needs to see some improvement. The ability to create your own players is a staple of sports video games and although we want to see developers try new things and not get bogged down with old ideas and concepts, we don’t want to see popular features abandoned either. As the saying goes, if it ain’t broke, don’t fix it.

Again, there were obviously more important things to focus upon when making the leap to the new generation and I have no doubt that sacrifices needed to be made, but expanded roster customisation features need to return to both series beginning with next year’s titles. That also means the ability to easily edit rosters offline, save them locally and then upload them when desired. There hasn’t been a quality NBA All-Star Weekend mode since NBA Live 09 on the Xbox 360 and PlayStation 3. Granted, its inclusion isn’t as important as fine tuning the five-on-five gameplay or ensuring that modes like Dynasty, Rising Star, MyGM and MyCAREER are deep, functional and engaging, but it’s still worth considering as both series look to build upon this year’s releases.

It should go without saying, but the All-Star Weekend is a significant event in the NBA season, a spectacle that dates back almost 30 years when the first NBA slam dunk contest and three point shootout were held in Denver in 1984. For both NBA Live and NBA 2K to offer the “complete package”, it makes sense for them to implement the full Weekend – and do it proper justice – at some point in the near future. The approach used in NBA Live 2005 would be a good template to work from, though I imagine it can be revamped and done even better. Just no more “Dunk Hero” controls, please.

If nothing else, it’s a great mode to have available for exhibition play, something you can have fun with when you’ve got ten minutes to spare. It’s enjoyable, it’s adding depth to the NBA experience and it should look spectacular on the new consoles. Let’s see it happen. Don’t get me wrong. Sports games should be evolving and looking to do new things, rather than just adding a new coat of paint to their existing features. In that respect, what NBA 2K14 has done with MyGM is most welcome, though I do have my quibbles with the mode that I’ll get into some other time. I’m less thrilled with what they’ve done with MyCAREER in NBA 2K14 next gen, but points for creativity and effort all the same. Dynasty Mode certainly has some catching up to do, as does Rising Star, but it’s nice to see them in NBA Live 14, there to be built upon and expanded.

While both games absolutely should be trying to innovate with new ideas, at the same time it would be nice to see some of the old modes retained. A no-frills, single season mode for users who want a straightforward experience. Playoffs Mode, so that you can set up your own postseason brackets whenever you want. A multi-season mode like Association, which sits somewhere between single season mode and MyGM in terms of its features.

I know that it may sound weird to ask for what some may consider to be antiquated modes, but I think that having them there does a better job of catering to everyone and results in a more well-rounded product. I don’t think that you need to put a lot of time and energy into them, especially when you’re obviously developing new flagship modes, but simply having them in the game and ensuring that they’re fun and functional should be sufficient for any gamers who are after something that’s a bit more familiar. Or in the case of NBA Live, a practice mode, period. Quality of the games aside, NBA 2K14 is certainly much kinder to new players, offering tutorials in the form of Training Camp, Freestyle practice for a no-pressure environment in which to learn and master the controls, and scrimmages to get a hang of five-on-five gameplay without any distractions. NBA Live 14 should have done this and it’s something EA Sports must add to the series, plain and simple.

As far as NBA 2K is concerned, what’s already available is quite satisfactory in my opinion, but it could be improved upon by allowing users to practice running plays and dealing with different scenarios, such as last second shots or fast break drills. Free throw practice never goes astray, either. We can certainly make do with what we have of course, as five-on-five scrimmages obviously allow us to gain experience in a variety of gameplay situations, without the pressure or distractions that are there even in exhibition games. However, it would add depth that I’m sure would not go unappreciated.

For the moment however, it’s NBA Live that really needs to lift its game in this department. If nothing else, being able to pick a single player and shoot around on an empty court is a handy feature for players who are looking to really get a grip on the game’s controls. This is one that should take a backseat to any improvements and additions to the core experience, but considering what we should be seeing this generation in terms of graphics and animations, combined with the ability to stream and upload content…wouldn’t it be awesome?

It’d be great to have some in-depth video and reel editing tools, so that we could save our favourite replays, put together slick mixes and compilations with all kinds of effects and then stream or upload them. As the games continue to look better and better and we find ourselves experiencing exciting highlights on the virtual court – especially with the Eco-Motion engine’s ability to create unique-looking moments in NBA 2K14 – we need better facilities to show them off.

NBA Live 09 and NBA Live 10 were starting to make some strides in this area but now that there’s better technology to work with, I’d like to see both NBA Live and NBA 2K take the concept even further. By all means let users upload raw videos so that they may edit them on their computers if they wish, but providing us with some powerful video editing tools without having to leave the console would be a very nice feature for next gen basketball games, not to mention sports titles in general.

That’s going to do it for this week. What are some of the features that you’d like to see in basketball games as we begin this new generation? Let me know in the comments below and as always, feel free to take the discussion to the NLSC Forum. Thanks for checking in, please join me again next Friday for another Five.

Great list. I remember the replay editor for College Hoops 2k7. I had fun with it but I didn’t really find a lot of use for it. I can see with the next gen if we were able to create a highlight package a la sports center, then we may have something.

I know I call for this on every “What we want to see” post but, hey, I really would love this feature.

Some kind of SportsCenter-like Top 10 or post-game highlight package is definitely something I had in mind when I wrote that. For that matter, being able to manually put together the type of reels that the game automatically generates would be very cool, in my opinion.

I believe that next gen NBA games should take creating players to the next level, finally they have fantastic cameras, and so I believe that it should be used well.

Scanning faces is the perfect way to do it, really it could be quite simple, this technology has been around since Live 2000’s Gameface, just have the camera make you do simple movements with your head. And it will definitely define next gen gaming.

It’d be tough to match what they’re able to do with faces with just one camera, but that is definitely a cool idea, one that would indeed take CAP to the next level.

@Andrew Shakedown2012 had a great idea he said that 2k should set up booths in malls or certain areas and charge you to do your face scans. Doing so you get get that high quality just like the NBA players…Why not charge people like 20$ and do it..

Interesting idea. I imagine it’d be a fun promotion for them to run and not too expensive to get a high quality face in the game, if it’s at all feasible.