The Friday Five: 5 Fun Things To Do in Basketball Games 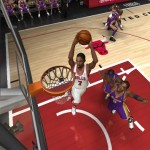 It’s Friday once again, so it’s time for a new edition of The Friday Five! For those of you who are unfamiliar with The Friday Five and are wondering what it’s all about, this is a feature that I post every Friday in which I pick a topic that’s related to basketball video games, the real NBA or another area of interest to our community, then either give my thoughts on the topic in five points or compile a Top 5 countdown.

As basketball fans and basketball gamers, we’re in a somewhat uneventful part of the year. The big names in free agency have signed on the dotted line and there aren’t too many exciting rumours making the rounds as we currently sit a couple of months out from the start of the 2014 season. NBA Live 14 and NBA 2K14 news is still at a trickle, so the conversation right now is more about speculation than analysis of any in-depth previews. Therefore, today I present five fun things to do in basketball games, to pass the time until more news starts to come in and the new season begins.

1. See how many crazy shots you can knock down Let’s start with something simple. Try to make as many wild shots as possible, particularly from beyond midcourt. If you’ve got five or ten minutes to kill and modes like Slam Dunk Hero have lost their appeal, why not find out just how generous the game is willing to be in letting you hit some Hail Marys? While messing around in NBA 2K13’s free practice mode to grab the screenshot you see above, I made about three shots from halfcourt out of, oh, at least fifty attempts. Get a second player involved and you’ve got a makeshift H.O.R.S.E. mini-game.

For added fun, fire up one of the really old games, turn off Out of Bounds calls and put up regular jumpshots from fullcourt, standing as far in the corner as you can possibly get. The percentages may not be spectacular but with persistence, you’ll find that you can emulate this old Powerade commercial featuring LeBron James.

Note: This should not be attempted when playing online. Don’t be that gamer. Just don’t. I know that a lot of gamers like to do this on a regular basis, but if you tend to prefer playing with real rosters or at least using the current rosters as a base for your own NBA reality in modes such as Association and Dynasty, give this a try sometime. Play some games with classic teams, inject legendary players into the current NBA and pit today’s elite teams against some of the all-time great squads from yesteryear.

Naturally, I have to mention the Ultimate Base Roster for NBA 2K12 PC here. HAWK23 and company have not only done an amazing job of expanding the roster of classic teams in the game and adding missing players to the teams that were available out of the box, they’ve also included full retro season mods going back to the 70s. There’s plenty of old school fun to be had and special teams to mess around with in UBR, so check it out if you haven’t already.

3. Wheel and deal for some crazy Dynasty/Association scenarios Alright, so this one goes against one of my tips/rules for having an enjoyable experience in Dynasty and Association mode, but it is something that’s worth doing from time to time. Simply put, go crazy when you put on your GM suit. Blow up your team and change the identity of your franchise overnight. Stack your roster with star players. Create the strangest looking NBA landscape outside of a fantasy draft.

Again, I wouldn’t recommend doing this with your main game in these modes, else you’ll probably find yourself getting bored and wanting to start over. Do this with a secondary game, one where you’re perhaps simming a lot of the games and just playing a key match-up here or there, to see what it’s like to play with the lineup you’ve created. Alternatively, you can certainly adopt a more conservative approach in setting up an interesting scenario for you to play with, while still changing things up. The main idea is to do something that’s at least a little out of the norm compared to the way that you usually play Dynasty or Association mode.

Also, for the record, the Lakers did indeed reject that deal. If you’re a Terrifyingly Pedantic Sim Gamer that can’t tolerate playing a sim title any other way, even every now and again for a change of pace, you’ll definitely want to give this one a miss. For everyone else, trying to break NBA records and post some crazy numbers, such as quadruple and quintuple doubles, can certainly be a fun challenge. If you want to keep your Dynasty, Association or MyCAREER game realistic, by all means stick to exhibition games for these challenges.

If you happen to be playing on Xbox 360 or PlayStation 3, some of the recent games actually offer an incentive to try to break records and recreate other memorable performances, in the form of Achievements and Trophies. If you’ve done pretty much everything else there is to do in the game, you might as well try to up that Gamerscore! Given that modding is such a big part of our community here at the NLSC, you had to know that I was going to mention it at some point. However, if you’re looking for something fun and constructive to do with a basketball game while you’re waiting for the next one to come out and the new NBA season to begin, why not look into modding?

There are several reasons why we like to mod the games in our community, beyond the fact that we can keep them up to date, fix things or add elements that the developers couldn’t include for one reason or another. We’ll be talking about that in an upcoming podcast in fact, but suffice to say that a lot of us do it simply because we find it fun and enjoy the creativity of it all. From a gaming standpoint, modding obviously allows us to do new things and create different experiences, which is perfect for when we’re starting to grow a little bored with a game and are looking to try something fresh.

Needless to say, these are things that are fun to do at any time of the year, not just when we’re waiting for the next season to begin or more news about the upcoming games to come out. However, in a slow period such as this, following the Draft and initial explosion of player signings and before a steady stream of video game news and previews, it’s a good opportunity to try out a few things that you might not normally do.

What are some of the fun things that you like to do when messing around with basketball video games? Let me know in the comments below and as always, feel free to take the discussion to the NLSC Forum. Thanks for checking in this week, please join me again next Friday for another Five.

You must’ve at least been a little disappointed that BG shot so poorly from 3, otherwise you wouldn’t got a triple double whilst scoring 100 points 🙂

I was just a tad disappointed with that, yeah. 😉

A video of one of the halfcourt shots from the aforementioned gaming session:
http://www.youtube.com/watch?v=ZTr31bAqBB0