The Friday Five: 5 Great Things David Stern Did For The NBA 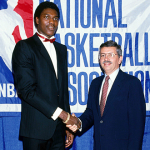 After 30 years, David Stern’s tenure as the commissioner of the NBA came to an end last Saturday, February 1st. For those of us who grew up watching the NBA in the 80s and 90s, he’s the only NBA commissioner we’ve ever known, so it feels a little strange to see someone else in the role. For the first year or so, I’m guessing it’ll be a bit weird to see Adam Silver presenting trophies, not to mention his signature on the basketball.

Last week, Yahoo! NBA posted a slideshow spotlighting five of David Stern’s missteps, a well-chosen selection of some of his most noteworthy blunders on the job. It’s certainly fair to acknowledge failure along with success, but with Stern bashing being such a popular pastime for NBA fans, it’s easy to forget all of the good things that he’s done for the league. Therefore, this week I’m taking a look at five great things that David Stern did during his time as commissioner of the NBA.

1. His anti-drug policies saved the NBA (and arguably, lives) Older fans may remember it first hand but if you’ve read Bill Simmons’ The Book of Basketball, you’ll know that the years before David Stern became commissioner weren’t exactly a golden age for the NBA. The league didn’t have the mainstream success it enjoys today and there was a significant drug problem, which certainly didn’t do anything positive for the sport.

Stern’s anti-drug policies didn’t just save the league and clean up its image; they more than likely saved lives, too. Indeed, Micheal Ray Richardson has credited Stern with doing just that, despite his previous claims that he was treated unfairly when he received a lifetime ban from the NBA after his third violation of the league’s drug policy back in 1986. Players like Richardson and Roy Tarpley may feel hard done by when it comes to the strictness of the policy, but David Stern’s stance on the matter is one that has placed the uttermost importance upon the welfare of the NBA and its players.

2.  He’s made the NBA better, relevant and profitable The NBA has prospered under David Stern’s watch and although the three lockouts during his tenure have each taken a financial toll, the league, its players and its owners have all done fairly well for themselves. Through lucrative advertisement and television deals, merchandising and global expansion (more on that in a moment), the league’s revenue has increased from $118 million in the 1982/1983 season to $4.6 billion this past year. The average player salary before Stern became commissioner was $250,000 per year, whereas it’s now around $5.5 million.

Stern certainly benefited from the presence of Magic Johnson and Larry Bird, who came along a few years before he became commissioner, not to mention the arrival of Michael Jordan a few months later. Several other stars have also played a role in raising the league’s profile and making it entertaining. Still, he did a great job of marketing his stars and bringing a fantastic sport to the mainstream, taking the NBA from strength to strength. The league has grown more popular and profitable throughout the years and maintains a positive profile, not only through the feats of its players on the court, but also its many charitable and community based initiatives such as NBA Cares.

3. He brought the NBA to the world Alright, so Stern’s pipe dream of expanding the NBA into Europe has a lot of problems and if it ever happens, it probably won’t be the way that he always envisioned it. No matter. Practically the whole world can experience the NBA these days, as the league is broadcast in over 200 countries. Before David Stern became commissioner? Just two, and even then the NBA Finals were aired on tape delay.

Now, there’s a lot to be said for the advances in technology in the past 30 years, which have provided Stern with resources that his predecessors obviously didn’t have at their disposal. Nevertheless, Stern must be commended for his efforts in opening up new markets overseas, securing foreign television deals, making NBA League Pass available around the globe via the Internet and scheduling both preseason and regular season games in other countries. He obviously didn’t do it all alone, but he deserves a lot of credit for his role in making it all happen.

4. His antics at the Draft were hilarious Watching the NBA Draft these past few years, I can’t help but feel that David Stern missed his calling as one of the great heel managers or on-screen authority figures in professional wrestling. Not only was Stern outwardly unfazed by hostile crowds, he actually seemed to relish taunting and riling them up even further, especially on Draft Night. Even when the class wasn’t a particularly exciting one, Stern made the Draft worth watching.

Whether it was gleefully listening to the jeering fans, encouraging them to keep it coming/be louder or making a joke about having to explain to the international audience that the boo is “an American sign of respect“, Stern was always unflappable and highly entertaining. I’m going to miss seeing him at the Draft in the years to come, but perhaps Adam Silver can invite him back to randomly announce one of the first round picks as a special treat for everyone.

5. He gave fans someone to hate With all the heated rivalries between teams and their respective fanbases, with all the fanboys, haters and people who just plain have a difference of opinion, it’s not always easy to get NBA enthusiasts to almost universally agree on something. However, whenever there was controversy or some problem with the league, fans could look at one another, shake their collective heads and say “Stern, right? What a jerk!” When we suffered through lockouts, David Stern was there to be the face of the whole mess, even though the problems ran deeper than just him. He weathered all the booing and criticism admirably, never letting it prevent him from doing his job effectively.

The funny thing is, while it’s easy to paint him as a tyrannical dictator – especially when you hear about some of his obscenity-laced tirades behind the scenes – it’s obvious that he cared very much about the NBA. He’s always spoken of the league and its players with pride. He’s punished and condemned NBA players when they’ve been out of line, but he’s also been quick to defend them. He’s a polarising figure and he certainly made some mistakes during his 30 years on the job, but at the end of the day, I’d say that David Stern was a great commissioner for the NBA. For Adam Silver, it’s a tough act to follow.

That’s all for this week. How would you rate David Stern compared to the commissioners of other professional sports, past and present? What do you think about Adam Silver? Sound off in the comments below and as always, feel free to take the discussion to the NLSC Forum. Thanks for checking in, please join me again next Friday for another Five.