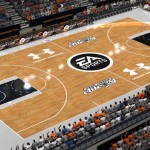 It’s Friday once again, which means it’s time for this week’s edition of The Friday Five! For those of you who are unfamiliar with The Friday Five and are wondering what it’s all about, this is a feature that I post every Friday in which I give my thoughts on a topic that’s related to basketball video games, the real NBA or another area of interest to our community, either as a list of five items or in the form of a Top 5 countdown.

A few weeks ago, EA Sports revealed that NBA Live 14 will feature a single player career mode called Rising Star. While I’ve traditionally been more interested in modes like Dynasty and Association, I spent a lot of time with MyCAREER in NBA 2K13 and enjoyed it immensely, so I’ll definitely be giving Rising Star a try in the hopes that it will be a similarly engaging experience. Since I listed the things that I want to see in Dynasty Mode in a previous Friday Five, this week I’m taking a look at the five things I’m hoping to see in Rising Star as it makes it debut. This is admittedly tough to balance to everyone’s liking. The starting ratings shouldn’t be too high, as it will make the game too easy out of the gate. At the same time, if the player’s ratings are too low, the game may be too difficult and frustrating at the beginning, which is also unappealing. As far as levelling up is concerned, it shouldn’t be possible to easily max out a player at 99 overall within the first season, but you also don’t want to spend an unpleasant time grinding for paltry ratings boosts. Rising Star mode therefore needs to strike a happy medium in both of these areas.

Depending on the build – pass first point guard, athletic swingman, etc – a player’s ratings should reflect a decent amount of competency across the board, perhaps with a couple of specialities where appropriate and the overall rating no higher than the league average at the very most. Additionally, players who are meant to be great athletes should have reasonably high athletic ratings to begin with and not have to build them up too much, since they presumably would be entering the league in their physical prime.

When it comes to earning Rising Star Points, a player’s performance should net them a fair amount of them game-to-game to avoid the frustrating task of grinding, while still requiring the user to play well. The grading logic should be balanced, subtracting a reasonable number of Points when a player’s performance is poor but adequately rewarding them for good play. Considering that this is still an issue in NBA 2K, I am expecting a few teething problems in NBA Live 14, but I’m hoping that it will feel reasonably fair for the most part. In time, skilled gamers will learn all the moves and strategies to be successful in a mode like Rising Star. However, the quality of the gameplay experience always comes down to the artificial intelligence, especially in a mode where you can only control and make decisions for one player. Ideally, teammates in Rising Star mode will be able to think for themselves and actually play basketball rather than just standing around, while at the same time being aware of your presence and not ignoring you on offense or refusing to help out on defense.

The coaching AI needs to be competent as well. Rotations need to make sense, you definitely shouldn’t play the entire game or become a starter before you’re ready, and your performance should fairly dictate your playing time and place in the pecking order. In a similar vein, the GM logic needs to be smart as well. There shouldn’t be too many trades or big names changing teams, as it does detract from the overall experience when your team’s lineup – or indeed, the entire NBA landscape – looks completely different within the first ten games of the season. The cancelled NBA Elite 11 is not a title you’d generally look to for ideas on how to make a successful basketball video game, but based on what we learned about Become Legendary, the mode did have some good concepts. I like the idea of “Fingerprints”, objectives and milestones that indicate a player has made a mark on the league. Achieving them could net a generous amount of Rising Star Points, being a performance that demonstrates how a player has improved and taken their game to the next level.

Bounce back objectives are another good idea that you may have heard us discuss in a recent episode of the NLSC Podcast. In a nutshell, if you have a bad game, you’re presented with a bounce back objective in the next game for an opportunity to earn additional points to make up for the previous subpar performance. It’s another hook that could set Rising Star apart from MyCAREER and could go a long way in keeping player development fair, while also making each game feel fresh and interesting. Become Legendary certainly had potential, so hopefully they’ve been able to salvage some of the better ideas for Rising Star. NBA 2K13’s restriction of one MyPLAYER per profile definitely caused some disappointment among MyCAREER gamers. Although it was possible to start multiple careers and make changes to height, position and playing style, all MyPLAYERs had to use the same name and appearance. While there was a reason for this approach, chiefly the content related to Virtual Currency, for many gamers it was a frustrating limitation for a mode that features several RPG-like elements.

If there aren’t any similar issues with the content and features in NBA Live 14, then allowing the creation of multiple players with which to play concurrent career games is the direction I’d like to see Rising Star take. As with Dynasty Mode, it would be fun to have a few Rising Star games going at once, each with completely different players if desired. It would reinforce the fantasy aspect of the mode and allow for more variation in the experience when starting a new career. I don’t believe it’s really fair to expect Rising Star to have the same amount of depth as MyCAREER in its first incarnation, but I am hoping that it does include many of the same basic features. Since we’re in charge of guiding our player through a career, I hope that free agency is well-represented, trades can be requested and there are suitable facilities for earning Rising Star Points outside of your team’s scheduled games.

Elements such as meeting with the team’s GM to discuss your role or level of satisfaction not only help guide your career, but make the mode much more immersive. Again, I’m not sure how much of that stuff can be included this year, but whatever they can add in that regard would definitely be welcome. Endorsements, highlights, articles, acknowledgement in the commentary and yes, even a fake Twitter, are all nice touches that add to the atmosphere and virtual world that a career mode is trying to create. Needless to say, I want the gameplay experience to deliver, but I’m also hoping that some additional bells and whistles can be added to bring “flavour” to Rising Star mode.

That’s going to do it for this week. What are some of the things that you’re hoping to see in NBA Live 14’s Rising Star mode? Let me know in the comments below and as always, feel free to take the discussion to the NLSC Forum. Thanks for checking out this week’s article, please join me again next Friday for another Five.