Welcome to this week’s edition of The Friday Five! The Friday Five is a feature that I post every Friday in which I give my thoughts on a topic that’s related to NBA Live, NBA 2K, and other basketball video games, as well as the real NBA, and other areas of interest to our community. The feature is presented as either a list of five items, or in the form of a Top 5 countdown. This week’s Five is a list of five mechanics in MyTEAM that I believe are outdated.

There was a time when I thought that I’d never have anything to do with the team building/card collecting modes in NBA Live and NBA 2K. It seemed like a good idea for a mode, but something for other games to enjoy. However, Ultimate Team has been the mode I’ve played the most of in NBA Live on this generation, and I’ve really enjoyed it. I’ve dabbled with MyTEAM as well, but I’ve mostly been occupied with MyCAREER and its connected modes. I got some great cards in NBA 2K19, but I was too focused on getting my player to the Hall of Fame to really play with them.

I’ve spent more time with MyTEAM in NBA 2K20, and it’s been fun so far. The developers working on the mode made some welcome changes, such as making it far easier to unlock the Auction House, adding the daily login bonuses, and generally allowing us to build decent collections at a steady pace without paying money. That last point in particular is important, especially in a mode that is a big money-maker for 2K. Still, as much as I like MyTEAM and have enjoyed getting into it more this year, I can’t help feeling that some of the mode’s mechanics are outdated. They don’t ruin the experience, but I’d consider them drawbacks in an otherwise fantastic mode. 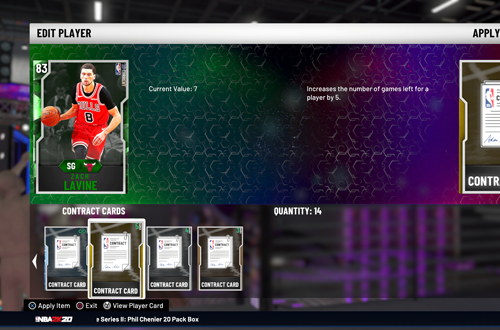 At this point, contracts feel like an outdated mechanic that just gets in the way of a good time playing with the cards you’ve collected. It just adds more busywork, and is a waste of a consumable item when you need to apply more games to players at the end of the bench who rarely get into the game because of the shorter quarter lengths in MyTEAM. I realise that managing contracts is part of the challenge and it’s far from an impossible task, but it still strikes me as antiquated. In fact, the ease at acquiring new contracts and keeping a healthy supply of them underlines how useless they’ve become. Again, it’s pointless busywork, and might as well not be a part of the mode.

Indeed, EA Sports has done away with Ultimate Team contracts in NBA Live and Madden, though FIFA does still utilise them. Keeping them in MyTEAM is a way of potentially making some extra revenue through VC sales, but since contracts can be purchased with MT and earned in a variety of other ways, I can’t imagine it’s a huge source of recurrent revenue compared to packs. There is merit in retaining contracts for online play, as a means of competitive balance. To that end, an outdated mechanic needn’t be removed, but simply updated as appropriate. If contracts are to remain in MyTEAM, I’d suggest keeping them for online, and removing them for offline play. 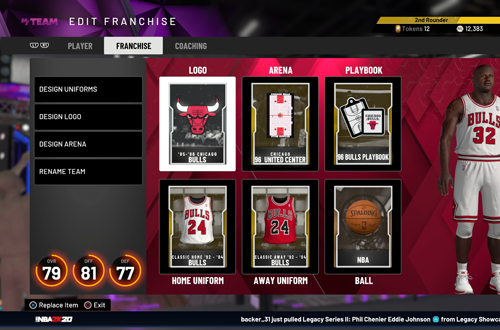 MyTEAM features some great branding options. In addition to unlocking the ability to create your own custom jerseys and court and import your own logo, there’s a wide range of historical uniforms, arenas, and logos to collect. It’s easy enough to switch them in and out, but with the jerseys, we’re limited by the uniform assignments. The Association jerseys can only be used as home jerseys, while the Icon jerseys are all designated as road jerseys. Even though the new jersey assignments and nomenclature have basically done away with the home and away designations, jerseys in MyTEAM are still pigeonholed into the old approach as far as how they can be used.

Now, I’m not a fan of the change in jersey assignments and nomenclature that came with Nike getting the uniform deal, but it is what it is, and it’s resulted in that part of MyTEAM becoming outdated. Considering the vast amount of jerseys we’re able to collect, it would be preferable if we could assign a bunch of them to choose from on a selection screen, similar to the carousel in other modes. If nothing else, an extra slot or two for secondary and retro jerseys would be a handy way of wearing a different jersey without having to edit your team branding each and every time. It’s not a huge problem, but it’s a way in which an outdated mechanic could feasibly evolve. 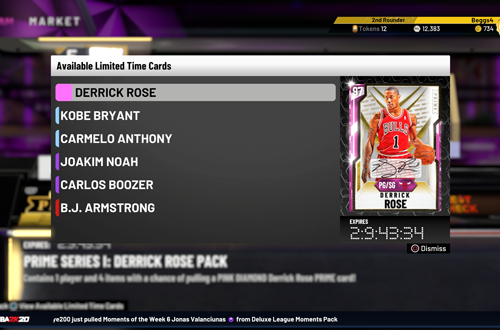 Ultimate Team took some disappointing steps backwards in NBA Live 19, but one of the ways in which it did improve – aside from removing contracts, of course – was to display pack odds. Of course, one of the ways the mode regressed was to remove the historical packs that guaranteed pulling one of the featured Legends; an approach that inspired me to drop a few bucks on some packs in NBA Live 18. MyTEAM could take some cues from both of these examples. With the controversy over gambling mechanics being such a big issue, MyTEAM packs should display the actual odds of pulling each of their rewards. It’s something that real trading card packs do, after all.

The approach to pack contents is also outdated. Historical packs often don’t include an historical player; only a chance of pulling one. I’m not saying every pack should yield a Hall of Famer, but if you’re buying a historical pack, it should have retro contents. One player per pack is also poor value, especially given how easy it is to get doubles, even when your collection is still quite small. The odds of getting doubles and quality players, as well as the approach of one player per pack, need to be revised and made fairer. Basically, MyTEAM should update its approach to provide more transparency and slightly better value in its packs. Ultimately, it’ll be a mutually beneficial change. 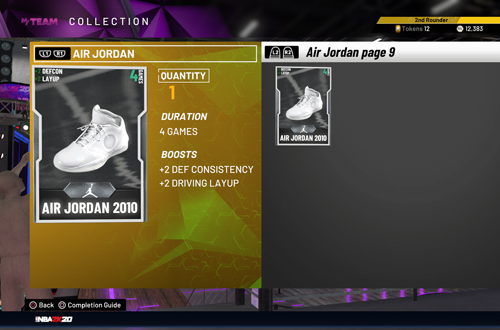 This may be a controversial one, but I believe that as a concept, the consumables in MyTEAM have run their course. I don’t think that players should get injured in a fantasy mode, where the whole idea is to assemble super squads and play with all of your favourite players. I’m not sure that the small boosts provided by shoes are worth it, given that they expire in just a few games. I’d suggest that it speaks volumes that Badges were removed from the assortment of consumables in NBA 2K20. Much like contracts, they amount to pointless busywork and don’t really add anything to the experience. I don’t believe the mode would suffer if they were done away with.

In fact, it would help greatly when it comes to my previous point about pack odds and contents. I’d much rather get a couple of lower tier players to complete my collection than shoes I’m more inclined to sell than ever use for a negligible boost. I’d suggest it was worth trying out the idea of consumables that allow gamers to add variables to the mix, but with a variety of pre-boosted cards – not to mention the new Evolution cards – they’ve been rendered redundant. Once again, the fact that Badge cards have been removed is basically an admission that consumables aren’t really worthwhile. The remaining ones should also be phased out along with contracts in NBA 2K21.

5. Auction House, But No Card Shop 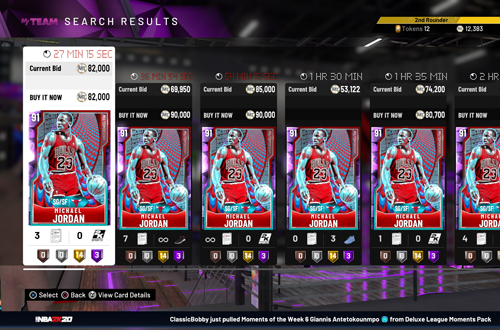 As I said in my introduction, NBA 2K20 made a great move by making the Auction House unlockable at an earlier stage. Being a core feature, it really shouldn’t ever be locked at all, but I understand they’re trying to curb unscrupulous behaviour. If it is going to be unlockable, then at least the current approach is fairer than the original requirements in NBA 2K19 (which were thankfully amended by a patch). However, gouging and market crashes are still a problem. The Auction House is still a great way to expand your collection with cards you’re seeking, and obviously you can get lucky with pack pulls, but I’m surprised that MyTEAM still doesn’t have a card shop.

What I mean by that is a shop where you can buy specific cards at a set price, rather than wait for an affordable deal on the Auction House or trying your luck with packs. Under this idea, top cards would be available to purchase individually at a premium (but still fair) price. This would also set a market value for cards, which users would be welcome to try to undercut in the Auction House, or try to sell at a mark-up when the card rotates out of the shop. True, it would be bypassing the loot box mechanics, but it could still be profitable for 2K if the cards were VC purchases only. We’d still be able to grind for them and get the cards we want, so it’d be a win-win situation.

Fellow MyTEAM gamers, how do you feel about these mechanics and the possible changes that I’ve suggested? Is there anything else that you feel is outdated and would like to see change in MyTEAM? Let me know in the comments section below, and as always, feel free to take the discussion to the NLSC Forum! That’s all for this week, so thanks for checking in, have a great weekend, and please join me again next Friday for another Five.