The Friday Five: 5 Players You Had To Have in NBA Live 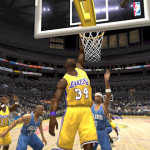 It’s Friday once again, so welcome everyone to this week’s edition of The Friday Five! For the uninitiated, this is a weekly feature that I post on Fridays, discussing a variety of topics related to basketball video games, the real NBA and other areas of interest. The “Five” refers to the way in which I present my thoughts on the week’s topic, which either takes the form of a list of five items or a Top 5 countdown.

Over the years, I’ve spent a lot of time with NBA Live’s Dynasty and Franchise modes, building plenty of teams and in the process getting a feel for some of the best players to acquire in different iterations of the game. Therefore, this week I’m listing the five players that I believe you had to have at some point while playing through a Franchise or Dynasty game. Remember when words like “upside” and “potential” hadn’t quite yet become grossly overused in regards to the NBA Draft? Pepperidge Farm…alright, that meme has long since taken an arrow to the knee. Anyway, circa 2001 there was a huge obsession with drafting high schoolers thanks to the recent success of players such as Kevin Garnett, Kobe Bryant and Tracy McGrady. These young players came into the league brimming with talent and athleticism, with tremendous upsides and oodles of potential, the latter attributes being something that sportswriters and commentators loved to talk about.

Then-Wizards executive and part-owner Michael Jordan certainly seemed to buy into the idea when he made Kwame Brown the first high schooler to be taken at number one overall. As most of you are probably aware, things didn’t pan out so well for Kwame in real life, but as a rookie in NBA Live 2002 he was a generous 78 overall, which not only made him a serviceable big man right out of the box but one that was also very attainable via a trade. Thanks to his hidden potential attribute giving him the best possible chance to develop, he almost always turned out to be a superstar player within a few years in Franchise Mode. Speaking of players who skipped college, a year before Kwame Brown was picked first overall Darius Miles had become the high schooler taken earliest in the Draft when the Los Angeles Clippers selected him at number three. Once compared to KG, Miles’ career didn’t come close to resembling that of The Big Ticket, as he never developed into a star and injuries ultimately cut his time in the league short.

Like Kwame, however, he was afforded a much better chance at superstardom in NBA Live. Rated an extremely generous 87 overall in NBA Live 2003, his good athletic ratings and a Dunking rating of 95 made him a dangerous threat in a game that was skewed towards an up-tempo, arcade style of play, thanks in no small part to the fact that the newly introduced Freestyle Control was too overpowering upon its debut. With such a high overall, he could also be used to trade for superstar players and tended to develop into a 90+ overall player. In his prime, Shaquille O’Neal tore up the real NBA and subsequently enjoyed similar dominance in basketball video games, being a must-have player throughout the years in NBA Live. The Journeyman Shaq thread is a good example of how sought after he was in both NBA Live and NBA 2K, as the all-time great possessed the ability to get the job done at both ends of the court. As games progressed and offered better ways to effectively make use of his gifts – better recognition of strength and weight, features such as Freestyle Superstars – he provided an even bigger advantage.

Being a highly rated player, Shaq wasn’t always easy to trade for but always well worth acquiring; in addition to his on-court performance, he also provided you with a player who could help net just about any other star in a trade. Having him on your team also kept him out of the hands of your CPU opponent, where he was usually very difficult to stop. During an NBA Live 2002 franchise, Virtual Shaq once had a couple of games where he scored 71 and 58 points against me. Of course, the following year NBA Live 2003 added a “take charge” button and I was able to have a game in which I held him to six points in limited minutes as he fouled out. I’m no fan of flopping but hey, when the CPU cheeses, you do what you have to do. One of the most successful players to come straight out of high school, Kevin Garnett has been a great player to have in NBA Live over the years. In contrast to players like Kwame Brown and Darius Miles, Garnett’s relatively quick rise to superstardom at such a young age meant that he was already one of the best players in the league while still having a lot of years ahead of him. If you wanted a versatile star that remained among the league’s elite for several years in a Franchise or Dynasty game, could easily develop into a 99 overall player and remained a quality trading chip even as he aged and declined, KG was your guy. According to one member in our original Forum, he also made a great point guard.

In one of the best deals I ever made, I brought KG to the Bulls in exchange for Jalen Rose, Marcus Fizer and Roger Mason Jr. in an NBA Live 2004 Dynasty game that remains one of my favourite basketball gaming experiences. Needless to say, I didn’t regret the move as KG was my MVP on route to a championship, along the way having a 70 point game and tallying a quadruple double.

5. Anyone with Outside Scorer Freestyle Superstar abilities (NBA Live 06) Alright, this is something of a cop-out, but it’s absolutely true. Freestyle Superstars didn’t exactly pan out in the long run (which is a topic for another day), but it had its merits despite being a little too overpowering. In terms of effectiveness and trade value, the top rated stars with Outside Scorer Freestyle Superstar abilities were obviously preferable, but even the lower rated Outside Scorers were valuable commodities. Ben Gordon is the example I’ll offer from my NBA Live 06 Dynasty.

Ironically, Outside Scorers were must-have players because of the inside scoring weapons included in their moveset, such as up-and-unders and other elusive layups which had a very high success rate. When you desperately needed a basket in NBA Live 06, it was best to drive hard with an Outside Scorer and trigger one of their FSS layups. Cheap, yes, but a handy part of your arsenal when the CPU started to cheat and cheese.

In fact, these moves served as a good barometer of how brutal the comeback logic was at any given time. When you started missing Outside Scorer layups left and right, you knew that the AI meant business and wasn’t about to play fair. Nevertheless, they remained your highest percentage shot, which meant having at least one Outside Scorer on the roster was a must for clutch situations.

So, that’s my list. Who are the five players that you always had to have at some point while playing NBA Live, NBA 2K or another game? Let me know in the comments below and as always, feel free to take the discussion to the NLSC Forum. Thanks for checking out this week’s Friday Five, please join me for another edition next week!

Nice list. For me, I’d name another Clipper draftee out of high school: Shaun Livingston. Pre-horrific-injury, he was an excellent player to have in the game and was a constant triple-double threat for me as his great point guard height made him a tough matchup.

Livingston was definitely an intriguing prospect, yet another player who could be a star in video games despite things not working out so well in real life (especially after that terrible injury). I remember a couple of Livingston-like players being generated in my 06 Dynasty and taking an interest in them during my scouting, though they were ultimately snapped up by other teams before I could draft them.

.your right at ben gordon 🙂 i always traded for him in my live 06 dynasty

The Outside Scorer FSS definitely made him a potent offensive threat while being easier to acquire than a player like Kobe or T-Mac. He certainly panned out for me in my NBA Live 06 Dynasty with the Bulls. 😉

Haha, right on about the cheating A.I. I’ve experienced moments when just about everything wouldn’t fall for me, including wide open fast break dunks.

That’s when you know that the comeback logic is in full swing. You’re missing wide open dunks and layups, while everything is falling for the CPU and they’re making defensive stops left and right. Funny, that… 😉

Enjoyed the article but a little disappointed that you left out Jonathan ‘GOD’ Bender?

Bender was definitely another one of those players that panned out better in video games and would usually turn into a beast thanks to his potential attribute. I didn’t get him all that often though, so he didn’t make my five.