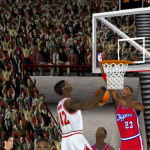 Now that JaoSming has changed the focus of Dumb Mondays from random trivia to a random assortment of facts, opinions and discussion topics, I don’t feel quite as guilty about borrowing the original concept for a Friday Five topic. This week, I’m trying my hand at serving up some trivia about a few of my all-time favourite basketball video games.

Basically, this is a collection of facts and trivia that I’ve wanted to talk about, but haven’t been able to work into any of my Friday Fives so far. Chances are I’ll revisit them if the right topics present themselves, but just in case I don’t find a way to bring them up again, here are 5 Random Basketball Video Game Facts that I hope you’ll enjoy reading about.

1. Sim basketball games have utilised the “on fire” concept Well, sort of. Besides NBA Live 99 and NBA Live 2000 borrowing the flaming ball and net concept for their arcade modes, the early games in the NBA Live series used a similar approach to NBA Jam’s fire to represent player momentum and hot streaks. In NBA Live 95 and NBA Live 96, making three consecutive shots or defensive stops without the other team scoring would cause a player’s indicator to pulse, a sign that they were in an offensive or defensive groove. While in this state, which lasted until the opponent scored again, players received a small boost to their shooting or defensive abilities.

Of course, we still see this concept in simulation games today, as representing hot and cold streaks is obviously an important part of emulating the ebb and flow of real basketball. Naturally, today’s methods tend to be more sophisticated and realistic, as streaks in NBA 2K – both in the current gen engine and in next gen’s Ecomotion – do not depend on unanswered baskets. Still, it’s interesting to note that the concept has actually been around in simulation games for a long time, and that it originally took its cues from an arcade title.

2. Players with a dunk rating of zero can dunk in NBA Jam “So what”, I hear you say. “It’s NBA Jam, it’s all about dunking. Of course everyone can throw it down!” Fair point, but it’s apparently not supposed to be that way. Tips screens in the games themselves clearly state that players with a dunk rating of zero can only perform layups; however, such players can indeed rock the rim and draw a “Boomshakalaka!” from Tim Kitzrow.

It should be noted that players with a dunk rating of zero (as well as a rating of one or two) won’t dunk as often as players with higher dunk ratings, nor will they perform any of the really crazy slams. Presumably, the idea of having players that were completely unable to dunk was ultimately scrapped in the name of fun, allowing gamers to at least be able to perform a couple of dunks no matter which player they chose. If so, the presence of the tips screen referencing those players’ inability to dunk would appear to be an oversight. Whatever the case may be, the claim certainly isn’t accurate.

And speaking of my favourite arcade basketball series… I want to make sure that I remain respectful here, as Yinka Dare unfortunately passed away in 2004 at the age of 31, having suffered a heart attack brought on by a condition that he was first diagnosed with during his college days. However, it’s fair to say that his NBA career was far from stellar. A lost rookie season (one game, three minutes, one defensive rebound, two fouls, one turnover, one torn ACL), the dubious record of 58 games played without registering a single assist in his second year, four career assists to 96 career turnovers…it’s no surprise that his name comes up whenever the topic of “Worst Player in NBA History” arises.

In the Super Nintendo version of NBA Jam Tournament Edition, Dare was given fairly decent ratings, about on par with most average big men in the game. Following his disastrous rookie season, his ratings were severely downgraded in the PC version, as you can see in the screenshot above. Given NBA Jam’s style of gameplay, he actually wasn’t completely useless; he could move quickly enough with Turbo and if nothing else, he could knock down opponents, block shots, and dunk. Still, with so many low ratings, one wonders why Midway bothered keeping him in the game at all. They’re just about the worst ratings you’ll ever see a player receive in a basketball video game. Although it has obviously been surpassed by basically every game that has come along since, in its own series or otherwise, NBA Live 96 on PC remains one of my favourite basketball video games. Gameplay-wise, I enjoyed it just as much as NBA Live 95, and it was the game that introduced inactive rosters, the Free Agent pool, and Create-a-Player to the NBA Live series. When it came to that last feature however, the back of the box promised a little too much…or at the very least, the wording made it seem like it did.

Specifically, one of the key features on the back cover of NBA Live 96 PC mentioned the ability to “Create, Draft, Edit and Trade players”. Now, you could certainly trade any player for another, create players until there were no available roster slots left, and edit any player that you created. However, you couldn’t edit original players and there wasn’t any way to actually draft a player as such, beyond simply placing them on a team. You certainly couldn’t enter any Draft information when creating players, meaning my created Michael Jordan was billed as being undrafted on the starting lineup screen. This was, of course, quite an annoyance for my twelve year old self.

Come 1997, my family finally got connected to the Internet and I discovered a website called the NBA Live Series Center, which provided an editor that allowed me to do pretty much all the things I wanted to as far as creating players in NBA Live 96 PC. The rest, as they say, is history. I’ve mentioned it in previous Friday Fives and several basketball gamers have expressed the same sentiment over the years, but it bears repeating that NBA Live 2000 was a definite high point in the NBA Live series. It introduced Franchise Mode (later re-branded as Dynasty Mode) and boasted an impressive roster of Legends, including Michael Jordan. It also featured a very respectable crop of rookies from the Class of 1999, including Elton Brand, Steve Francis, Baron Davis, Lamar Odom, Wally Szczerbiak, Richard Hamilton, Andre Miller, Shawn Marion, Jason Terry, Corey Maggette and Ron Artest.

Unfortunately, those rookies all made use of generic faces. Presumably, issues with the roster cut-off date forced them to be added later in the game’s development, at a point when the player artwork had already been completed, meaning no real faces were available for them. Fortunately, we had quite a few people in the community making quality updates to replace those generic faces; unfortunately, those updates have pretty much all been lost over the years. However, we have had a few people uploading updates for NBA Live 2000 in recent years, so if you’re looking for an enhanced retro gaming fix, you should still be able to find proper faces for most of those players in our Downloads section.

That’s all for this week, I hope that you enjoyed these five random facts about some of my favourite basketball video games! If you have a favourite item from this week’s Five or a fact you’d like to share, let me know in the comments below and as always, feel free to take the discussion to the NLSC Forum. Thanks for checking in, please join me again next Friday for another Five.

See? SEE? It wasn’t a choice, I was forced outta town seee.

Thanks, it was actually quite a fun one to write. I don’t know that it’s a topic that I’d want to use every week, though. 😉