The Friday Five: 5 Reasons I’d Like An Unlicensed Basketball Game 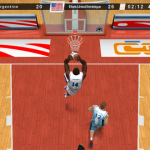 As I mentioned in last week’s Friday Five, I’ve been spending my gaming time occupying myself with this and that as I wait for the Australian release of the PlayStation 4, along with NBA Live 14 and NBA 2K14. In addition to the five things I listed in last week’s column, I’ve also had another glance at International Basketball 2009, a title you may remember from the Friday Five a couple of weeks ago when I listed five basketball games that were bad, yet still entertaining. My opinion of the game hasn’t changed much since then, though I still find the idea of an unlicensed basketball game very intriguing.

While I’m still more interested in playing NBA sims and the occasional arcade title, I can’t help but wonder if there’s a market for a quality unlicensed basketball game. Given how much I used to enjoy World League Basketball on the Super Nintendo back in the day, it’d be something that I’d at least have to check out. Therefore, this week I’m listing the five reasons I’d like to see an unlicensed basketball video game, preferably one that plays better than International Basketball 2009.

1. It would be completely fantasy driven As far as NBA games have come in all the years that I’ve been playing them, there’s obviously still room for improvement. A common annoyance for fans of sim basketball is a lack of realism when it comes to individual player performances; stars playing like stars and all that. Even if the CPU plays a pretty good, strategic game of basketball for the most part, it detracts from the experience when the wrong players are taking the most shots, scoring the most points or otherwise turning in performances that are highly unlikely in real life.

In that respect, I sometimes envy the more casual basketball gamer who doesn’t particularly care about those details. I naturally want to see NBA games strive for excellence in this area, but an unlicensed game with fictional players offers an experience where a more casual approach can actually be a lot of fun. If virtual LeBron James isn’t tearing up the league in an NBA video game, then it definitely stands out as a flaw. However, it doesn’t really matter how Robert McFictional performs, as we have no point of reference and real life comparison to worry about.

I still envision a game that resembles real life of course, with realistic player movement, basketball strategy and so on, not to mention players with differing levels of skill and playing styles. We just wouldn’t have any real players to make any comparisons to, so we wouldn’t be bothered by this player scoring 50 points or that player averaging five steals per game. If you’ve ever simmed deep into Dynasty or Association Mode, you’re probably familiar with what I’m talking about. I wouldn’t trade a realistic NBA sim for it, but it’d be a fun alternative to play on the side. Being a gamer that’s a huge fan of basketball and the NBA in particular, I’m obviously interested in having a great NBA sim that replicates the real league as much as possible, right down to the minute details. Once again, I don’t want to see that gaming experience go anywhere, but I’m all for variety and a change of pace. It’s one of the reasons that I do enjoy arcade basketball games, despite being a sim-head when it comes to the five-on-five titles.

As I mentioned before, a game with fictional teams and players offers a fully fantasy based experience, without the comparisons to real life that sometimes leave us feeling disappointed with details that aren’t quite right. More than that, it would be pure virtual basketball, ideally a realistic depiction of the sport with all of its strategies and nuances, within a reality driven by the gamer’s imagination. Play a simulation of a sport you love, while creating your own stars, stories and league history. At the end of the day, just play basketball.

Of course, that’s just the basic concept and experience out of the box. An unlicensed basketball game featuring fictional teams and players wouldn’t have to remain an experience based in fiction…if it can be modified and re-skinned.

3. Ideally, it would be completely (and easily) editable With a wide variety of editing tools and an ability to be externally edited, an unlicensed basketball game essentially becomes a modder’s sandbox in terms of creating different leagues, both real and fictional. Without a set structure it must adhere to, such a game could potentially account for several different sets of rules, season lengths and playoff/tournament formats. With a Create-a-League mode, it would simply be a matter of selecting the appropriate options then creating and editing players, teams and artwork as necessary.

A game like that would facilitate a myriad of projects for a talented modding community such as ours. Presumably there’d be ample editing facilities for the console version of the game – and to be financially successful, I imagine that there would have to be a console release – but an unlicensed game with modder-friendly roster and art files would be tailor-made for PC gamers.

Provide us with some official editing tools and a generous amount of in-game customisation options, and we can create a variety of entertaining basketball games out of the base product. A fun, serviceable NBA sim? A college hoops game? The Olympic tournament? Your local school or recreational league? An unlicensed game would allow for all of those concepts and more, should the default rosters not suffice.

4. No interference from a real league The lack of any license and real world branding could certainly hinder a basketball game in terms of marketability, but it could also help it creatively as there wouldn’t be a league looking over the developer’s shoulder, dictating what can and cannot be included. Unsportsmanlike technical fouls and an argue-with-the-referee mini-game? No problem, if there’s no NBA to put the kibosh on the idea. Fights? As I’ve said before, I don’t think that they’re really needed in a basketball game, but if that’s want a developer wants to do, there won’t be anyone to say no.

In short, there’d be a lot of flexibility in terms of features and elements of basketball that developers like EA and 2K aren’t allowed to include. There’d also be the opportunity for a longer development cycle with kinder deadlines, seeing as though the game would not have to coincide with a real league’s season. It would be interesting to see what could be accomplished when a basketball game doesn’t need to be finished within a year.

Finally, all those modding possibilities I just mentioned? A whole lot easier when you don’t have to account for any licensing restrictions.

5. It could eventually mean another NBA game on the market This is probably a long shot and it does admittedly tread on the toes of the above point, not to mention the concept of an unlicensed basketball game in general, but it would be awesome if an unlicensed basketball sim eventually got to the point where its quality and success allowed its developer to acquire the NBA license. Beyond simply being an inspiring success story, in the best case scenario it would become another viable option for NBA gamers and add more competition to the market.

For this to happen, I’d suggest that the developer producing the game would need to be large enough to have the resources to put out a good basketball sim and ultimately secure a deal with the NBA, while at the same time having the confidence and competence to release a quality product without the NBA’s branding to sell it. In other words, it would have to be an AAA game, just one that doesn’t immediately throw its hat into the ring with EA and 2K. There’d also have to be concessions to comply with league policies and standards, though as long as the core experience remained enjoyable, the final product would be worth it.

There’s also the possibility that the game could ultimately acquire a different license, perhaps a foreign league, an international tournament or even the Drew League. While I wouldn’t mind seeing an unlicensed game eventually become another quality NBA sim, it’d also be cool if we basketball gamers had a similar situation to the one that association football gamers have with Pro Evolution Soccer and FIFA. Whatever the case, I feel there’s always room for alternatives, should a developer be willing to invest the time and money.

That’s going to do it for this week. Would you be interested in playing an unlicensed basketball game? Have you had fun with some of the unlicensed basketball games (or games with fictional players, such as college basketball titles) that have been released in the past? Let me know in the comments below and as always, feel free to take the discussion to the NLSC Forum. Thanks for checking in this week, please join me again next Friday for another Five.

I agree what game it is ?

In the screenshots? International Basketball 2009.

The chance to play with fictional players has always appealed to me. In the game you mentioned the players should be random but they stay as they are and if I remember well are not randomly generated more times.
I remember a nice game called High Heat Baseball (I owned the 2001 and 2003 versions, now at home I can find only my 2001 CD), where you could start a season and the team were randomly generated if you wanted so. I always wanted to see the same option on a Basketball game.

If the customization options were well thought out and left you with the ability to build leagues in any fashion with a high team limit (we are talking 200+ at least, I am thinking college basketball [345 teams] here) I would definitely look into it. The gameplay would have to be good. Doesn’t have to be 2k good for me to buy but has to be playable. The customization alone would have me intrigued.