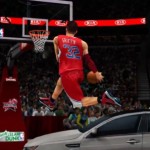 Welcome everyone to this week’s edition of The Friday Five! For those of you who are checking out the Friday Five for the first time, this is a weekly feature which I post every Friday, covering a variety of topics related to basketball video games, the real NBA and other subjects of interest to our community. These topics are explored either in list or Top 5 countdown format.

As the participants of this year’s Slam Dunk Contest have been announced and we’ve been giving our thoughts on the contest in recent episodes of the NLSC Podcast, I’ve decided that in this week’s Friday Five, I’ll take the opportunity to talk about the five things that I believe are needed for the dunk contest to be a truly worthy main event for All-Star Saturday Night.

Being a subjective contest that is based on creativity rather than one with objective results, such as the Three Point Shootout (a shooting drill with a time limit and straightforward scoring system) or the Skills Challenge (an obstacle course with a time limit, best time wins), there’s never going to be a format that ensures that the Slam Dunk Contest will always be won by the “right” participant. At best, there’ll be a fair consensus based on an educated opinion.

That’s why the contest has traditionally had judges, and why it’s absolutely ridiculous that these judges are currently discarded after the first round. Having a panel of judges for one round and fan voting in the final round makes little sense; either use one method or the other! My preference would be to use judges throughout the contest as it’s worked just fine for many years, give or take the odd controversy.

Six competitors, two rounds, three dunks per round, five judges award scores out of ten, top two or three total scores in the first round advance to the finals, top total score in the finals determines the champion. Simple, straightforward and fair…well, depending on the judging, I suppose.

2. No fan voting, or at least a change to the way fan voting is utilised

I defended fan voting for the All-Star starters in an earlier Friday Five, but mentioned that I didn’t like it for the dunk contest. Seeing as though it is an event for the fans, even more so than the All-Star Game which in theory is intended to be a competitive game between the best of the best, it makes sense to give fans some kind of involvement.

However, that involvement is currently detrimental. Fan voting opens before a single dunk in the final round has been attempted, so the winner can quite easily be decided based on first round performance, making the final round quite pointless. As I mentioned before, you’ve already got the judges there for the first round; just have them judge the final round as well!

A reasonable compromise would be to instead allow fans to vote for potential participants in the first place. We know who we’d like to see in the contest and players willing to compete could campaign for our votes after throwing their hat into the ring. Alternatively, you could replace one judge with fan voting as they did in the 2002 Slam Dunk Contest, with four judges in the arena and the average score from the fan vote combining to award scores out of 50. Either approach would be preferable to the current arrangement.

Speaking of the 2002 contest, here’s hoping we never see The Wheel again. It was an idea with good intentions, but it was ultimately a hindrance.

I won’t say that props and gimmicks should be banned entirely. In the name of creativity you can’t really do that and when it’s a clever idea, it does bring something new and exciting to the table. It’s also not like they’re a recent innovation: Terence Stansbury was jumping over a chair in 1986 and Larry Nance won the inaugural NBA dunk contest after slamming home two basketballs.

However, it’s gone too far. A lot of people felt Paul George should’ve won the dunk contest last year and were praising his “Tron Dunk”. Personally, I thought it was a bit too gimmicky and it wasn’t until they showed the replay that it was clear what kind of dunk he actually performed. It turned out to be a 360 windmill, a fine dunk in its own right that was overshadowed by the gimmick. Don’t even get me started on the Larry Bird sticker dunk or Jeremy Evans’ forehead cam slam.

There’s still plenty of stuff that can be done just using the ball, new spins on old dunks and combinations of ideas that have been done separately before. The 360 windmill is a good example of that. People talk about Dwight Howard’s Superman cape, but his best, most innovative dunk was his double tap lob. That was crazy, something very different that didn’t require props or gimmicks. Don’t ban them, don’t even penalise them out of principle when scoring the dunks, but don’t reward props and gimmicks for their mere presence or let the creativity of the dunk itself become a non-factor.

For a lot of people, this may be the first thing that comes to mind when thinking about things that the dunk contest needs to be great. It’s certainly a reasonable suggestion as star power raises the profile of the event and arguably, the stakes as well. After all, if the big names are taking part, it must mean something…right?

I certainly don’t disagree with the notion – obviously, here it is on my list – but I don’t think it’s necessarily a requirement for the dunk contest to be great. After all, it’s not as though all of the great performances in previous contests came from superstar players, nor are superstar players necessarily the best and most creative dunkers in the league. It may raise the profile of the event, but it doesn’t always mean the event itself will turn out better.

That said, I would like to see some more stars give the contest a try at least once or twice, not to mention superstar dunk champions being more willing to attempt to defend their crown. As many people have suggested in years gone by, up the prize money if need be.

Putting aside the concept of the dunk contest experiencing something of a renaissance, which it admittedly has a couple of times in its history, there are only two times when the dunk contest has actually been “back”: its adoption in 1984, eight years after the ABA event, and its resurrection in 2000. Similarly, not every contest is going to be a classic, just as not every All-Star Game or indeed NBA Finals series is one for the ages.

The first four items on my list are what the dunk contest needs to do to be great. This is what it needs from those of us watching it, so that it may be properly appreciated. That’s not to say we shouldn’t criticise a subpar dunk contest. When it’s underwhelming, we have every right to grumble as if it were a film or an episode of a television series that didn’t meet our expectations, but the fact of the matter is that not everything can be great and live up to the hype.

A disappointing contest here or there is no reason to scrap the event, nor do we need to proclaim a triumphant renaissance every time the contest turns out to be a good one. When the contest is a letdown, we can hope for a better one next time around. When it exceeds our expectations, we should hope for more of the same.

Perhaps the thing to keep in mind though is that even if the contest has its flaws and nothing is ever really done about them, it still tends to be an exciting and entertaining exhibition of dunking. In its current format it can be frustrating and problematic, but the clips and highlight reels are almost always worth checking out after the event. It’s a rare dunk contest that hasn’t delivered us at least a few entertaining slams and hopefully, we’ll see a few more of them in a week’s time.

That’s all for this week’s Friday Five, thanks as always for checking it out! Leave your comments below about the things that you think that the dunk contest needs, as well as any other thoughts you have about this year’s contest, and also feel free to take the discussion to the NLSC Forum. I’ll see you all again next week with a new Five.