Welcome to this week’s edition of The Friday Five! The Friday Five is a feature that I post every Friday in which I give my thoughts on a topic that’s related to NBA Live, NBA 2K, and other basketball video games, as well as the real NBA, and other areas of interest to our community. The feature is presented as either a list of five items, or in the form of a Top 5 countdown. This week’s Five is a list of jerseys that we didn’t expect to see included among the selection in basketball video games.

We’ve grown accustomed to a wide selection of alternate and retro jerseys to choose from in basketball video games. This wasn’t always the case, however. It wasn’t until NBA Live 2003 that EA Sports’ long-running series added both the ability to select jerseys in-game, and a single retro uniform for every team. Over the years, more and more jerseys were added, though they were briefly removed when the series made the jump to seventh generation. NBA 2K has also come to feature a wide selection of jerseys, with NBA 2K20 including just about every major jersey each team has worn.

However, not only have there been some noteworthy omissions over the years, we’ve also seen some unexpected uniforms make the cut. The context that makes a uniform an unexpected inclusion varies from example to example, but suffice to say, we’ve sometimes been left surprised upon scrolling through all of the options on the jersey selection screen. In some cases, rare and even fictional jerseys have found their way into the game, increasing our choices and letting us hold our own theme nights in the various franchise modes. Looking back, I would suggest that these five rank amongst the most unexpected jerseys to have been featured on the virtual hardwood. 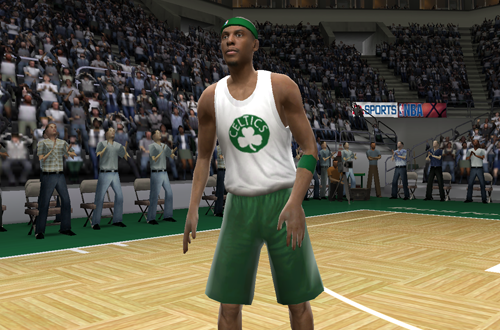 There have been a number of teams that have had throwback jerseys from clubs they weren’t actually associated with, including teams from other leagues that once played in the same city. The four former ABA teams that still exist – the Spurs, Nuggets, Pacers, and Nets – have also featured retro uniforms from their ABA era. Other teams have featured throwbacks from the 50s and 60s, including those from their former cities. None of those jerseys have been particularly unexpected and surprising when they’ve shown up on the selection screen in games, though. Several teams have worn those retros in real life too, and the rest are logical additions that celebrate history.

And then, there are the Original Celtics jerseys, which can be selected for the Boston Celtics in NBA Live 2005, and a few of the following games. Tracing their roots back to the New York Celtics, the Original Celtics were a barnstorming team that once won around 90% of their games. They later competed in the original American Basketball League, where they were twice champions. The modern Celtics – an original BAA franchise, of course – have no connection to the Original Celtics, apart from taking inspiration from their name. I also can’t find any record of them wearing the jersey for a Hardwood Classic night in real life, making them an unexpected addition back then. 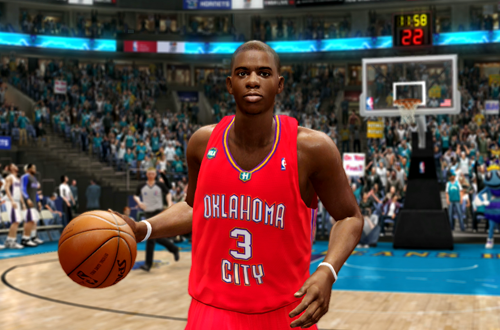 These red New Orleans-Oklahoma City Hornets jerseys, which were worn only once on Valentine’s Day 2007, have likewise only made a single appearance on the virtual hardwood. The special set of jerseys, which were later auctioned off with the proceeds going to the American Heart Association, didn’t appear in NBA Live 07 or NBA 2K7; the games set during the season in which they were worn. Instead, they’re among the retro jerseys for the New Orleans Hornets in NBA Live 10. While it wasn’t odd that the rarely worn Oklahoma City Hornets jerseys remained in NBA Live 08 after their return to New Orleans, the Valentine’s Day uniform in NBA Live 10 was unexpected.

That does make them special though, and it was a pretty cool decision on the part of the developers to include such a rare and obscure jersey in NBA Live 10. Since they didn’t get to be included the first time around, it’s great that they’ve been available to wear in a video game at least once. Obviously there have been mods that added it to more recent games – and probably a few from back in the day that have been lost to time – but as far as official appearances are concerned, it’s one of the most unique in basketball games. I’d forgotten they were included in NBA Live 10 until I recently fired up the game again, so I experienced their unexpected nature all over again. 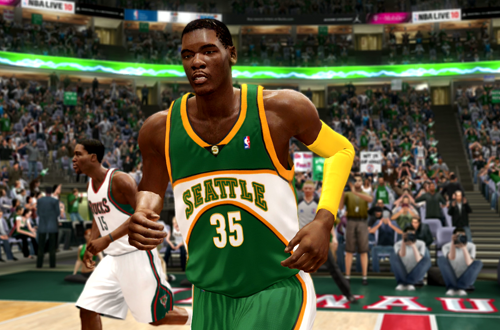 To say that Seattle SuperSonics fans have lingering resentment towards the Oklahoma City Thunder is an understatement. The team relocated under circumstances that were controversial to say the least, with the one saving grace being that Seattle held onto the Sonics name, colours, and records. Although they have a shared heritage, and will continue to do so if Seattle is ever able to revive the Sonics, the Thunder don’t wear Sonics jerseys on throwback nights, and most former Sonics refuse to have anything to do with the team. That’s why it was somewhat unexpected when not one, bur two sets of Sonics throwbacks were available for the Thunder to wear in NBA Live 10.

On one hand, that might seem disrespectful, and like it’s twisting the knife. On the other hand, it also allows anyone playing with the Thunder in NBA Live 10 to pretend that – in a limited way – the team is still in Seattle. If you want, you can play every game in a Thunder Dynasty in Sonics jerseys. Considering that there were no retro Sonics teams in NBA Live 10 (or any throwback squads for that matter), it was the best way of getting them into the game. These days, NBA 2K allows you to select Sonics jerseys for the All-Time Thunder (which includes Sonics Legends), but back in NBA Live 10, it was definitely unexpected to get two Seattle throwbacks. 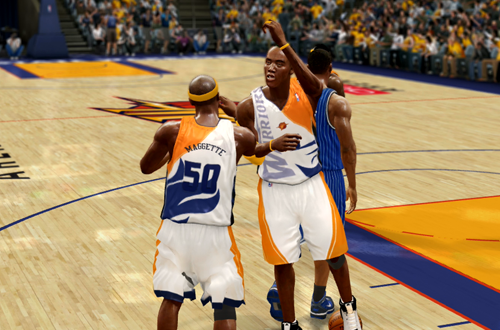 Alright, one more for NBA Live 10; last one on this list, I promise! The fictional Gold Standard jersey was created in a contest that EA Sports ran after NBA Live 08 was released, with the winning design being included in NBA Live 09. It was submitted by user Adelphotes, and after being chosen as the winner, it was added to NBA Live 09 as promised via free DLC. As I said in my Wayback Wednesday feature, I’d have to agree that there were some better designs – our own Pdub’s comes to mind – but it was still creative, and the contest was a great idea to engage fans. I’m surprised that neither EA nor 2K has tried it since, though I suppose it does mean fictional content.

With that in mind, the jersey’s appearance in NBA Live 10 was perhaps somewhat unexpected. Obviously it wouldn’t have taken much effort to leave it in, but since NBA Live 10 featured a big push for authenticity and the addition of retro jerseys after they’d been missing all generation, the Gold Standard jersey was a strange leftover. Even stranger, the design was slightly updated in NBA Live 10. Areas that had been gold in the jersey’s original design and first appearance in NBA Live 09 were coloured orange in NBA Live 10, probably to be more in line with the team’s colour scheme. Of course, since then the Warriors have gone back to blue and gold. 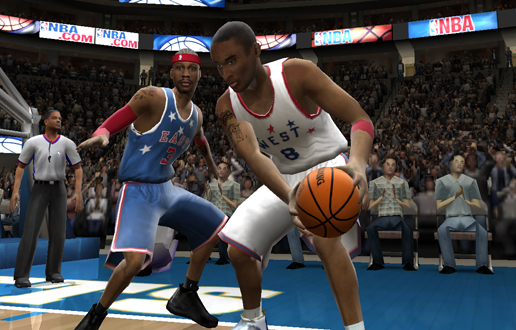 I’m surprised that with all the retro content we’ve seen in basketball games over the years – especially NBA 2K – we haven’t seen much in the way of retro All-Star teams. We’ve had All-Time squads for each of the 30 NBA franchises, of course, but there haven’t been any throwback All-Star teams (unless you count the games launching with the previous year’s All-Star rosters, but that’s not really the same thing). It would be inaccurate to say that there hasn’t ever been any retro All-Star content, though. Along with several retro NBA jerseys that were added out of the box and as NBA Store unlockables, NBA Live 2005 also included throwback East and West uniforms.

More specifically, the unlockable jerseys are the 1964 East home uniform, and the 1971 West home uniform. The corresponding away jerseys are already unlocked by default. Looking back, I can’t recall nor figure out why those jerseys in particular were included. NBA Live 2005 was the first game to feature All-Star Weekend mode, with the 2005 event taking place in Denver. The 1964 game was in Boston, while San Diego hosted the 1971 game. Furthermore, looking back at a few photos they’re not entirely accurate anyway, so may be mislabelled. They do slightly resemble some of the ABA All-Star jerseys though, which would tie in to Denver hosting the event.

I realise that every entry on this list relates to NBA Live, but honestly, glancing back through the jerseys included in NBA 2K and other 5v5 titles, none have struck me as being quite as strange and unexpected. With that being said, I’d be interested to hear about any I’ve overlooked, either in NBA Live or other titles. Let me know in the comments below, and as always, feel free to take the discussion to the NLSC Forum! That’s all for this week, so thanks for checking in, have a great weekend, and please join me again next Friday for another Five.

I can confirm that Original Celtics uni was never wore by Boston in any HWC nights.
What about Valentine Day unis, Hornets and unused Sonics and Cavaliers were hidden from 2k19 to 2k12. Same with retro Sonics uniforms.

Last edited 4 months ago by Pep

They were there in the files? I was only going by what was accessible in game, but that’s interesting.

Yes, they were. They weren’t accessible by default, but you can replace files to see them in game or add a new spot to a roster.

Last edited 4 months ago by Pep

Cool, good to know. I wouldn’t count them among official appearances and I’d say the jerseys were still unexpected in these games, but that’s interesting that they were hidden/unused in those games as well.