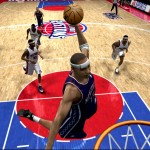 Welcome to this week’s edition of The Friday Five! If this is your first time reading The Friday Five, it’s a feature that I post every Friday in which I give my thoughts on a topic that’s related to basketball video games, the real NBA or another area of interest to our community, either as a list of five items or in the form of a Top 5 countdown.

Last week I offered my picks for the five best songs in basketball video games, so this week I’m going in the other direction and counting down my five worst songs. These are the tracks that I feel were either unsuitable for a basketball game or just didn’t appeal to me for one reason or another.

So to be honest, I don’t actually dislike this one. It’s not one of my favourite songs, but I do actually kind of like it. However, I’m going to include it in this list because I still believe it’s one of the worst choices for a song to include in the soundtrack of a basketball game. Granted, it was nominated for a couple of Grammy Awards (thank you, Wikipedia) and hip hop is obviously closely associated with basketball culture, but it’s a song that’s quite explicitly about skateboarding. Not exactly the most appropriate choice, though to be fair it was the least of our worries when it came to NBA Live 07.

This one isn’t really my taste, though it’s far from unbearable and I wouldn’t call it a terrible song in general. However, like “Kick, Push”, it seems somewhat out of place in a basketball video game. Around this time, it seemed like EA Sports were trying to mix things up a little with the soundtracks of NBA Live and the notion of having a little more variety is commendable, but I don’t feel that this song was a particularly suitable choice.

The instrumental version of “Lady Venom” used in NBA Live 2002 could actually make a pretty good track for a sports game, if not for the vocalisations. I just find them to be a little too mournful and a poor fit for the atmosphere that a basketball title is supposed to have. There are songs that I dislike more – in fact, I’ll be naming a couple of them momentarily – but this one often irritated me while playing the game, so it makes the countdown at number three.

As I’ve mentioned in previous Friday Fives, I’ve played a lot of NBA 2K13 since it came out, so this is a song I’ve heard quite often over the past six months or so. I’ll give credit where it’s due, it certainly does a good job of capturing the feeling of stress in musical form, but I don’t find it especially pleasant to listen to. I guess in all fairness, it’s just not my sound. So yeah…thanks for that one, Jay-Z.

Or simply “Bucky Done” as it was referred to in-game, presumably dropping “gun” to preserve a family friendly rating. Generally speaking, I’m neither a fan of nor dislike M.I.A., but I’ve definitely disliked this song from the moment I heard it in NBA Live 06. Not every song needs to relate directly to basketball or have the same kind of style, but it didn’t feel like a good fit and never grew on me. It sticks out like a sore thumb in what is otherwise a pretty enjoyable soundtrack, topped off of course by FortMinor’s “Remember The Name”.

So, that wraps up my countdowns of the five best and five worst songs in basketball video games. While I always appreciate a good soundtrack, I can honestly say it’s never been a deal breaker for me, especially since we’ve long been able to disable specific tracks in-game and in many cases with PC releases, add our own custom soundtracks externally.

Feel free to post any rebuttals and your own picks for the worst songs in basketball video games in the comments below, as well as take the discussion to the NLSC Forum. Please join me again next week for another Friday Five!

this is your personal taste. and btw, my personal taste is that your disliking of “Around the world” or Daft Punk in generally is blasphemy, sacrilege and madness 😀

Actually I like Viva La Vida. It give me a break between all those JayZ music. I think every playlist should have a song like that as a stop-gap in the whole playlist.

I like “Viva La Vida” as well, though I’d agree it’s not necessarily a song I’d think of if I were putting together the definitive soundtrack for a basketball video game.

actually for me … 5, 4 and 1 arent actually that bad (the stress song should’ve been no.1) these songs are the songs i like to call “trademark songs” that whenever you hear them you’ll now your in live 06 or 07 or 08 …

There are other songs on those soundtracks that I’d think of as the signature songs before those ones. As I said though, I don’t dislike “Kick, Push” or “Tell Me ’bout it”, but they’re unusual choices for a basketball video game soundtrack. I really don’t care for “Bucky Done (Gun)”, though; it never has grown on me.

I hate that song Tilted by Lupe Fiasco in Live 06
Also the M.I.A song you mentioned was also very annoying in Live 06.

My favorites are Grind Time by Chammilionaire in Live 06, A few Live 2003 songs, Champion by Ron artest kinda feels nice in a weird way

Agreed, “Titled” isn’t one of my favourites either. I do like “Grind Time”, as I said the 06 soundtrack is pretty good except for a couple.

I didn’t really understand what “Well All Right” from the HIVES was doing in a basketball game, but I still do like the song for it’s.. seemingly randomness I guess. Had a catchy beat too.

With you on that one.