If you caught my guest edition of Dumb Mondays last week, you’re probably aware that JaoSming is a bit tied up at the moment. As such, his weekly articles are currently on hiatus, though I’ll certainly see if I can fill in for him if I think of a topic that doesn’t quite fit the Friday Five format. However, for those of you who have been enjoying the Beat Jao challenges, I thought that I’d go the other way and adapt one of JaoSming’s concepts for this week’s edition of the Five.

As you’ve probably guessed from the title, the challenge I’m putting out there is comprised of five separate goals, all of which are to be attempted in the same game. I’m interested to see who can top my marks in all five areas, and given the way some of you have performed in the Beat Jao challenges so far, I’m sure that someone will indeed be able to surpass my efforts. At the very least, hopefully it’ll provide you with something fun to do while you’re waiting for the new games to come out. Let the challenge begin!

Before we get started though, a few ground rules: any basketball game, any quarter length, any sliders/gameplay settings, but all rules on (no disabling fouls, the shot clock, or anything like that), no cheats/hacks, and no created/edited players with maxed out ratings. For the record, I was playing NBA Live 2003 with the default rosters. All I can say is, you gotta love that step-back three-pointer cheese in NBA Live 2003. Most of the games in the NBA Live series have aimed to be sim – the results haven’t necessarily been to our liking, though that’s a topic for another day – but NBA Live 2003 was a game that definitely leaned towards being a more casual, arcade-style of five-on-five gameplay. If you want a fast-paced, offense-oriented title in which to put up some ridiculous numbers, Live 2003 is your game.

This is a straightforward challenge: beat the current record for most points by a team in an NBA game (186, set by the Detroit Pistons in 1984). My score was 247, and for those who are after a bonus challenge, see if you can beat the scoring records for both halves. I had 112 in the first half to edge the Phoenix Suns’ record of 107, set back in 1990, and 135 in the second to eclipse the Atlanta Hawks’ effort of 97 in 1970.

Challenge 2: Score at least ten points with every player While you’re setting a brand new mark for scoring, why not share the wealth? Sure, it’d be one thing to have one of your players beat Wilt Chamberlain’s individual record of 100 points while also setting a new team scoring record, but can you get all twelve players on the board and in double digits? Besides, I only ended up scoring 86 points with Peja Stojakovic, and that’s going to be too easy for some of you to beat.

Needless to say, this one gets a little tougher the deeper you delve into your bench. I’d certainly recommend getting those guys into the game and into double digits as early as possible; I didn’t, so it was kind of a mad scramble to get them all there in the second half. Nevertheless, I did manage to do it, and I’m sure that many of you will be able to as well. I’ll be interested to see just how you do it though, and whether you end up spreading the points around a bit more evenly than I did.

Challenge 3: Set a new record for three-pointers made (player and team)

The number to beat for an individual player is 12 (a mark shared by Kobe Bryant and Donyell Marshall), while the team record for a single game is 23 (done by the Orlando Magic in 2009, and the Houston Rockets in 2013). I managed to beat both marks by knocking down 26 threes with Peja Stojakovic, and added eight more for a total of 34. Mind you, Peja also finished with 55 attempts from behind the arc, so even with my abuse of the aforementioned step-back three exploit, the team was just barely above 50% from downtown.

I’m guessing that someone will be able to top all of my marks in this one, which probably means your team’s point total will be even crazier than mine. Again, I’m looking forward to seeing just how brutally my fellow basketball gamers can beat the CPU, hopefully with some scorching hot percentages from downtown. Man, if only I hadn’t missed all of those threes with Peja. Granted, I still managed to put up what I feel were some ridiculous numbers, but my final total and shooting percentage would’ve been a lot better without those 29 missed threes. As it stands, I just missed out on topping the NBA regular season record of 70.7%, set by the San Antonio Spurs back in the 1983 season.

No restrictions or anything here. Feel free to attempt as many threes, jumpers, layups or dunks as you like; whatever you need to do to get the ball in the basket. Just keep in mind that for “100% Completion” of the challenge, you do need to make at least 13 threes with one player, and a total of 24 by the team.

Challenge 5: Achieve the largest margin of victory in NBA history Well, the previous challenges already have you abusing the CPU and putting up big numbers; why not try for complete and utter humiliation? The score to beat here is the 68 point drubbing the Cleveland Cavaliers handed out to the Miami Heat on December 17th, 1991. Perhaps that’s a detail to keep in mind if you plan on attempting this challenge with the Ultimate Base Roster for NBA 2K14 or NBA 2K12.

The bonus challenge here is to defeat your opponent by 100 points or more, which I just managed to do as I downed the Raptors by 102. Truth be told, I was paying a lot more attention to offense than defense, so with a concerted effort at both ends of the floor, I’m sure at least one of you can leave that number in the dust!

So, that’s the challenge! Let me know how you do in the comments below, as well as in the NLSC Forum. Please also let me know if you beat any other records, or achieve some other statistical feats (such as triple doubles and the like) along the way. As far as proof of my scores is concerned, please see below. Thanks for checking in this week, please join me again next Friday for another Five! 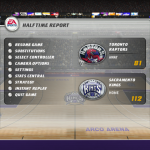 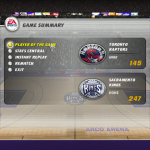 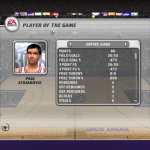 Are you dunking from half court in the 4th picture?

Actually, I’m getting away with a lot of contact on a block from behind.

I know that NBA Live 2003 had some unrealistic dunks but still… In picture 4th you are next to the 3pt line and you are already like I don’t know how many feet in the air, so that dunk must have started near the mid court.

As I said, that’s not actually a dunk. It’s actually an awkward block from behind that probably should’ve been a foul. 😉