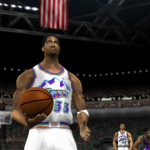 As 2013 swiftly draws to a close, there are just a couple of Fridays left in the year and thus only a couple of editions of The Friday Five before we find ourselves in 2014. I’ve definitely enjoyed using this column to express my opinions throughout the year and hopefully, it’s given you all something fun and interesting to read every Friday. I’m looking forward to bringing you more editorials and Top 5 countdowns in the new year. As someone who’s made a lot of roster updates over the years, this is something that I’ve been meaning to write about for some time. When I introduced The Friday Five at the beginning of this year, I had finally established a regular column on the NLSC, with a format in which I could easily outline the facts – and the myths – of overall ratings. As you can imagine, they’re a headache for any roster maker.

While they have their significance in basketball games and thus are something of a necessary evil, overall ratings tend to get way too much attention from gamers. If you’d like to learn a little more about overall ratings and why it’s generally more important to focus upon a player’s individual ratings, as well as the reason behind certain players always seeming to be overrated or underrated, I’d definitely recommend checking it out. It’s a piece that I’ll be inclined to repost whenever the subject of overall ratings come up. Being a huge Michael Jordan fan who has taken part in a lot of “Who is the greatest NBA player?” and “Next Jordan” discussions over the years, this is another topic that I felt inclined to speak out on after launching The Friday Five. I ultimately wanted to write an editorial that was as objective and fair-handed as possible, because it’s a discussion that sees a lot of fanboyism and double standards from both sides.

Indeed, I made a point of addressing some of those double standards and arbitrary criteria that fans and sportswriters alike tend to employ when comparing Michael Jordan and LeBron James. I won’t presume to suggest that I’ve settled the debate by any stretch of the imagination, but I’d like to think that I’ve brought up a few points that are worth keeping in mind when comparing these two phenomenal superstars, or any two great basketball players for that matter. If nothing else, I expect that I’ll mention them the next time the topic comes up in the NLSC Forum.

3. 5 Criticisms of EA’s NBA Games I Disagree With (October 25th) I enjoyed writing this Friday Five for a couple of reasons. Firstly, I believe it benefits us as a community if we are critical and analytical, but it’s important that we are also constructive and on the mark with our criticisms. Secondly, I wanted to post an article that was a bit more provocative than usual and anything that defends EA Sports (or at least abstains from outright bashing them) is undoubtedly going against the grain.

Of course, the point of the article is not to dismiss or discourage all criticism of EA Sports and their basketball titles. On the contrary, I do offer my own criticisms where appropriate, criticisms that I believe are fair-handed and more accurate than some of the comments that I sometimes see, especially the more trollish remarks that appear to be made simply because it’s trendy to dislike EA. I’d like to tackle more subjects like this in future Friday Fives, which will hopefully encourage some interesting discussion and diverse opinions. I’m actually going to cheat here and name two editions of The Friday Five, but they came in back to back weeks and were basically a two part series. In the first article, I talked about some of my favourite experiences playing basketball video games, including some of my most memorable Dynasty games. In the second article, I offered some reflections on a few basketball gaming ideas that didn’t quite pan out as I’d hoped.

I’ve been playing basketball video games for a long time, so I definitely enjoyed looking back at some of the memorable moments that I’ve had with them over the years. At the same time, I also felt myself getting a little nostalgic for some of the seasons that ultimately didn’t go anywhere and the ideas that were, in hindsight, a little silly or misguided. At the end of the day, I feel that whenever you’ve got stories like that to tell about sports games, they’ve succeeded in being a fun, immersive experience that keeps you coming back for more. I’ve mentioned it before on the NLSC Podcast, but Cracked‘s approach of using lists in their editorials was one of the main influences on the format of The Friday Five. I like the style and felt it would be a good way to talk about subjects that are relevant to our community in a fun and relatively concise manner, generally two or three paragraphs per item. I think we can all appreciate a countdown as well and I do want to do some more Top 5s in 2014.

Since they were an influence on The Friday Five, The 5 Types of Basketball Video Gamers was a bit of an homage to Cracked’s list articles, in particular topics like 4 Delusional People You Meet Working on the Internet and 5 Things They Never Told Us. Beyond that, it was also intended as an affectionate, slightly satirical profile of our community and the different ways that we enjoy basketball games. I was certainly very flattered when Da_Czar brought it up on Sim Nation Radio and hopefully, my fellow basketball gamers, it made you smile and perhaps gave you a bit of a chuckle.

That’s all for this week. Thank you once again to everyone who continues to check out The Friday Five and post comments, I’m glad you enjoy reading them as I certainly enjoy writing them. Please keep posting your thoughts and if you have any suggestions for a topic or Top 5 that you’d like me to cover, just let me know in the comments below or in the NLSC Forum. Be sure to join me again next Friday for the last Five of 2013.