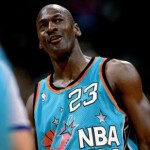 Welcome everyone to this week’s edition of The Friday Five! If this is your first time reading the Friday Five and you’re wondering what it’s all about, it’s a feature that I post every Friday in which I cover a variety of topics related to basketball video games, the real NBA and other things that are relevant to our community, giving my thoughts as either a list of five items or presenting them in Top 5 countdown format.

Since the 2013 All-Star Weekend is upon us, I feel it’s only appropriate that this week’s Friday Five be a countdown of my Top 5 All-Star Weekends. A couple of things to keep in mind: this isn’t an unbiased list; these are my five favourite All-Star Weekends, it’s not my intention to be completely objective or provide a “definitive” Top 5. I’m also referring to the Weekend as a whole rather than simply the All-Star Game alone, which is another countdown altogether. With that out of the way, let’s get down to business.

For those who are unaware, my all-time favourite player is Michael Jordan and my favourite team remains the Chicago Bulls. As such, I tend to cheer for the East in the All-Star Game and naturally enjoy any great performances involving MJ and the Bulls. As such, the 1991 All-Star Weekend was perfect for my tastes, with His Airness putting on a show in the All-Star Game that might have captured the MVP, if Charles Barkley hadn’t turned in a fine performance of his own.

In fact, it’s a very good game all around. Quite a few of the old guard are still there, along with the stars that were becoming the faces of the NBA as the league entered the 90s. It was a close contest that was decided at the buzzer, when a potential gamewinning three pointer by Kevin Johnson was negated by Karl Malone’s offensive interference. Crunch time often wasn’t kind to the second best power forward in NBA history (these days, I’d rank Tim Duncan at number one in that category).

All-Saturday Night was also very entertaining that year, with Craig Hodges (yes, another Bull) winning his second consecutive Three Point Shootout with some impressive scores and setting a record by making 19 shots in a row, a mark that still stands. The 1991 Slam Dunk Contest, meanwhile, is probably a little underrated these days and I’d go so far as to call it one of the best years for the Contest; definitely top ten and knocking on the door of top five. Champion Dee Brown’s dunks were great, it was Shawn Kemp’s best performance in the Slam Dunk Contest and Rex Chapman had some creative entries as well. All in all, a great All-Star Weekend that I can watch again anytime.

The 1997 All-Star Weekend is kind of a sentimental pick and if I were picking more objectively, it would admittedly be unlikely to make the cut for the Top 5. However, it stands out as special to me partly because it came during the NBA’s 50th season and I loved the presentation of the NBA’s 50 Greatest Players during halftime.

As for the game, it’s an interesting one. The West jumped out to an early lead but the East made a great rally to come back and win, thanks in no small part to an historic performance by MVP Glen Rice, while Michael Jordan tallied the first triple-double in the history of the All-Star Game and turned back the clock with a putback dunk off a missed free throw by Grant Hill. Even though it wasn’t all that close at the end, it was still a good game to watch.

1997’s All-Star Saturday Night on the other hand was a bit ordinary. I naturally enjoyed seeing Steve Kerr winning the Three Point Shootout and there were some nice entries in the Slam Dunk Contest that year, including Darvin Ham’s 360 and Kobe Bryant’s between-the-legs throwdown. However, the format for the first round (timed routine) didn’t work out so well, most of the contestants scored in the 30s and outside of a few of the dunks including the two I mentioned before, creativity was a little lacking. However, the Rookie Game was memorable as it featured the Class of 1996 and I still quite like the Weekend overall.

Coming off the lockout shortened 1998/1999 season which saw the cancellation of the All-Star Weekend, this was a perfect comeback for the midseason classic. The All-Star Game itself didn’t feature the greatest array of talent with the league in somewhat of a transition period, but there was still plenty of star power. Co-MVP Shaquille O’Neal’s 360 dunk in the open court stands out as one of the game’s most memorable highlights.

All-Star Saturday Night 2000 was entertaining across the board but what really solidifies this Weekend in my Top 5 is of course the Slam Dunk Contest, which has a really strong case for being the best NBA dunk contest of all-time. I don’t think there was a better duel between finalists than MJ and Nique in 1988 and other contests have certainly been great, but the star power in the 2000 contest and great dunks topped off by champion Vince Carter’s Half-Man, Half-Amazing, Vinsane performance…well, if it isn’t the best Slam Dunk Contest of all-time, it has to be right up there.

This is another one that a lot of people probably wouldn’t have on their list, but it makes mine in large part due to my bias as a Chicago Bulls and Michael Jordan fan. Taking place during their record setting 72-10 season, it was MJ’s first All-Star Game following his comeback the previous year and he turned in an “I’ve still got it” performance on route to winning the MVP. It should be noted of course that Shaquille O’Neal had a strong case for winning the MVP himself after an impressive performance, which included a huge dunk on hometown hero David Robinson.

It’s also one of the last All-Star Games to feature all the players that came along in the mid 80s and became the stars of the 90s. Injuries and age began to nudge some of them out of the All-Star picture after 1996, making this something of a swansong for a few of the game’s biggest stars. So, much like 1997, this is kind of a sentimental pick for me on top of everything else.

All-Star Saturday Night didn’t exactly steal the show that year, but it wasn’t terrible by any means. This was around the time the league was starting to experiment a little with the format of the Dunk Contest and like the 1997 event, it featured a timed routine in the first round. Champion Brent Barry and Michael Finley were the standouts that year and both were part of an enjoyable Rookie Game featuring the talented Class of 1995. Saturday Night was solid and fun, but it’s definitely the All-Star Game that has the 1996 Weekend this high in my countdown.

Although this is personal Top 5 list, I also believe that the 1988 All-Star Weekend in Chicago has to be on the shortlist for best All-Star Weekend of all-time. The All-Star Saturday Night events were chock full of talent and the All-Star Game featured an entertaining mix of rising stars (Michael Jordan, Charles Barkley, Karl Malone and Patrick Ewing) along with more established ones (Magic Johnson, Larry Bird, Kareem Abdul-Jabbar, Dominique Wilkins, Kevin McHale and Isiah Thomas).

The game, in short, was fantastic. Like most of the All-Star games of the era, there were plenty of highlights as the best of the best strutted their stuff and put on a show, but it was also very competitive. Michael Jordan was the best of the best of the best (no, that’s not a typo) in front of the hometown Chicago crowd, scoring 40 points (17/23 FG) to go along with eight rebounds, four steals, four blocks, three assists and quite a few entertaining dunks.

Speaking of dunks, the 1988 Weekend is probably best remembered today for the Dunk Contest duel between Michael Jordan and Dominique Wilkins, and the controversy surrounding their final dunks. While the criticism isn’t unwarranted, I feel compelled to mention a few things that are often overlooked: a couple of Nique’s dunks prior to that were scored very generously, the same dunk (the two-handed windmill) had let him down in the final round against Spud Webb in 1986 and MJ himself was arguably robbed in 1985 (Nique’s first win) and almost robbed in 1987 when some hometown love came very close to letting Terance Stansbury cause an upset in the second round. Controversial or not though, the duel remains a classic and those two Masters of the Slam Dunk certainly put on a show for the ages.

Let’s also not forget Larry Bird winning his third straight Three Point Shootout crown in dramatic fashion, confidently walking away with a gesture of triumph before the final shot had even gone down; he knew it was going down. It was a truly great All-Star Weekend from start to finish and definitely number one in my Top 5.

And there you have it. I expect many of you will have very different Top 5s, so feel free to respond to mine and post your own in the comments below, as well as take the discussion to the Forum. Enjoy the 2013 All-Star Weekend – I don’t see it cracking my Top 5 but I’m hoping it’ll be a good one nevertheless! – and be sure to check back in next week for a new Friday Five.

Let’s add some more memorable MJ moments to the list 😛

1988: halftime speech at the All-Star Game. Barkley was laughing, a couple guys were joking around and MJ basically informed them that they were going to win the game and whoever didn’t feel like playing that way should not play in the second half. And I actually liked that. I wish all players had that drive in All-Star Games.

1985: The freeze-out game. Eastern all-stars led by Isiah Thomas were jealous of the attention Jordan was receiving from the media and fans. This led to the freeze-out all star game, where players refused to pass the ball to MJ.

Lol and I forgot….the 1988 Slam Dunk contest….when everyone told MJ that it was impossible to dunk jumping from the FT line

I’m not sure what year this was, probably 93 or 96 even; Shaq going for a dunk and gets rejected, the ball heads out of bounds but Jordan saves it and gives it right back to Shaq for a monster slam! Jordan said something like “Right back to ya.”