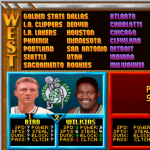 Welcome everyone to this week’s edition of The Friday Five! For those of you who are unfamiliar with The Friday Five, this is a feature that I post every Friday in which I talk about a variety of topics related to basketball video games, the real NBA and other areas of interest, providing my thoughts as either a list of five items or presenting them in Top 5 countdown format.

Although basketball video games keep our community entertained with the features advertised on the back of the box, throughout the years several Easter Eggs have served to enhance the gaming experience, facilitate modding or simply give us a bit of a laugh when we discover them. As such, these are my picks for the Top 5 Easter Eggs in Basketball Video Games.

The addition of multiseason modes featuring the NBA Draft has led to the use of fictional, generated rookies in basketball video games. You should all be familiar with the concept: since real college players cannot be included in video games, in Dynasty and Association mode we scout a class of fictional players that the game generates each season (the custom Draft Class option in NBA 2K not withstanding).

Quite often, the results of the randomised names are rather humorous. I’m sure that everyone has encountered the likes of Dikembe Smith, Igor Jones or Michael Olajuwon at some point. However, you can also expect to see names from the development team in there; to throw out an NBA Live example, the surname Tschirner is in the game courtesy of Tim Tschirner, one of the NLSC’s founders and later a developer on the series from NBA Live 2001 through NBA Live 07. Tim’s face was also used for the 70s All-Stars coach in a few of the games during that span.

You can also expect to see some combinations of names that surely aren’t coincidental. Generated players named Bill Cosby and Tupac Shakur – to toss out just a couple of examples – have been encountered by amused users over the years. It seems unlikely that names like that were simply a stroke of luck.

Editing the early games in the NBA Live series was a task made much simpler thanks to the combined efforts of NLSC founders Tim Tschirner, Lutz van Hasselt and Brien Smith. With their editors, it was easy to modify just about anything in the game and even find some hidden stuff, such as the overall ratings. Yes, they’ve been around for that long.

However, sometimes it was necessary to go poking around in the executable file with a Hex Editor to change certain text strings. Because the site’s policy forbid the distribution of the game executables (and still does; don’t do it!), Tim, Lutz and Brien developed a utility called Patcher that could be used to automatically apply the necessary modifications to the end user’s file.

So, what kind of stuff could you find while poking around in NBA96.exe? Quite a few unused text strings; to begin with, following the names of the five player positions is “Bench Warmer”. The Kansas City Kings, San Diego Clippers, St. Louis Hawks, San Francisco Warriors, Minneapolis Lakers, Tricities Blackhawks and Utah Stars are present as teams that players can be listed as being drafted by. While most of those options were very outdated by the 1995/1996 season, Kansas City was included for Otis Thorpe while San Diego and Utah were in the game for Terry Cummings and Moses Malone respectively, both of whom were in NBA Live 95 PC but did not actually appear in NBA Live 96.

The most amusing Easter Egg in NBA Live 96 PC, however? In various places in the .exe file, teams are referred to by abbreviated names – pointers to art files, and so on – 5-7 characters in length. The Toronto Raptors’ abbreviation is “craptor”, which surely had to be an intentional dig by the Vancouver-based development team at EA Canada as a show of support for their new hometown expansion team, the Grizzlies. Of course, the Vancouver Grizzlies turned out to be pretty crappy themselves during that inaugural season.

Several basketball games throughout the years have included hidden players in one form or another. NBA Live 2004 featured a handful of Class of 2003 rookies that were unlockable via a code. Similarly, the PlayStation version of NBA Live 2000 required codes to be entered to unlock all of the Legends. Celebrities and members of the development team have also been popular hidden unlockables, generally via entering codes on the Create-a-Player or Create-a-Team screens.

Some games are notorious for their hidden players. The NBA Jam series is arguably one big Easter Egg hunt in general, featuring games that are chock full of secrets and codes. Its penchant for hidden players is legendary, ranging from former NBA greats to mascots to development team members to celebrities and even politicians! In addition to seeing them randomly appear on CPU controlled opponents after defeating all the NBA teams (or as part of special challenges in more recent games), users could also take control of those hidden players through the use of codes.

The Super Nintendo version of NBA Live 96 is another interesting example. Released earlier than other versions of the game, NBA Live 96 on the SNES was missing the Class of 1995 rookies in addition to a couple of players that couldn’t be included for legal reasons, such as Michael Jordan and Charles Barkley. No matter. Enter the names of Jordan, Barkley, Kevin Garnett and many others in Create-a-Player and the game will automatically fill in their attributes. A few retired legends such as Magic Johnson, Larry Bird and even Wilt Chamberlain were also “unlockable” via this method, along with several developers.

2. Leftover art, audio and other assets from previous games

Leftover files and data are Easter Eggs that our community has been able to make great use of throughout the years when developing updates for both NBA Live and NBA 2K. When players are removed from the game, art files such as faces have sometimes been left behind which makes adding them to custom rosters much easier, especially in the console versions which cannot utilise custom art files. Sometimes this includes hidden players from previous games; something of an Easter Egg within an Easter Egg!

It’s not just art files, of course. The audio for certain players’ names in the PA Announcer’s speech files sometimes remains intact even after they’ve been removed from the game and can be reassigned after we’ve added them to a roster. Birth place and nickname data often remains in the databases from year to year. Occasionally, dummied out content has been accessible by swapping in compatible files from older games.

To say that these leftovers have been very useful would be a huge understatement and that’s why they check in at second place in my Top 5. What could possibly top something of such significance to our patching community?

How about the remnants of a much desired feature that was ultimately cut from the game?

Poke around in the players.dbf file from NBA Live 08 (or any of the NBA Live 2005-07 NLSC roster updates that I’ve converted from the current roster for 08) and you’ll find some complete championship teams, with their players assigned a Team ID that doesn’t exist in teams.dbf. As soon as we discovered this back in 2007, we immediately dug further and found that there were no art files for those players (with the exception of the ones that do appear elsewhere in the game), nor any of the teams.

It would therefore appear that NBA Live 08 was meant to feature historical teams at some point but the idea never saw the light of day, presumably due to an inability to secure likeness rights for all the necessary players. This isn’t surprising, seeing as how much of an achievement it was for 2K Sports to include historical teams in NBA 2K11, NBA 2K12 and NBA 2K13. Even then, they weren’t included in their entirety and certain players have disappeared between games as the agreements regarding their likeness rights have expired. Such is the stumbling block when it comes to including historical content.

It’s certainly interesting that EA Sports were apparently quite serious about getting historical teams into NBA Live 08 and one wonders how close they came to making it a reality before the idea was nixed, given the amount of players that were added to the database. EA has never addressed the issue and it’s unlikely that they ever will, but it remains an interesting discovery and perhaps something that patchers can still take advantage of at some point.

That wraps things up for this week’s Friday Five! I hope you enjoyed reading it and perhaps picked up a few interesting tidbits that you weren’t previously aware of. Please let me know some of your favourite basketball video game Easter Eggs in the comments below and feel free to take the discussion to the NLSC Forum. I’ll be back again next Friday with a new Five.