Posted by: Andrew in Features, NBA Video Games, The Friday Five May 10, 2013 2 Comments 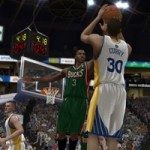 Welcome to another edition of The Friday Five! For the uninitiated, The Friday Five is a feature that I post every Friday in which I give my thoughts on a topic that’s related to basketball video games, the real NBA or another area of interest to our community, either as a list of five items or in the form of a Top 5 countdown.

It’s been fun counting down my top five best and worst songs in basketball video games over the past couple of weeks, but this week I felt like talking about something with a little more substance. As such, I’m counting down my Top 5 Underrated Features in Basketball Games. These are elements of gameplay, game modes and other aspects of basketball games that I feel are overlooked, underappreciated or in some cases, simply get a bad rap. It may seem strange to include a game’s flagship mode on a list like this, but I believe that Road Trip deserves some recognition as one of the best modes to be featured in a basketball game. With features such as Real AI, a variety of unlockables and a handful of roster updates, NBA Jam: On Fire Edition not only makes a strong case for being the best NBA Jam title but also the best arcade basketball game, period (sorry, NBA Street fans). However, Road Trip really puts it over the top.

Road Trip takes the best elements of the ladder from the original games, as well as the Classic Campaign and Remix Tour modes of the 2010 reboot of NBA Jam, blending them together to create a mode that’s suitably deep with a pleasing amount of replay value. It also supports single player, local multiplayer and online co-op play, without the need to start a new game if you want to bring in a friend or no one’s available to play at that moment. The team at EA Canada really should be commended for the job they did with Road Trip; it made the game enjoyable to sink hours into and along with Real AI, really set it apart from its predecessors. I know it’s been in other titles but as those are two of my top ten favourite basketball games, they’re the examples that immediately spring to mind. Whether you’re creating mods to distribute in our community or just whipping up some custom rosters for your own enjoyment, the ability to export roster data from the game mode of your choice is an extremely handy function.

While we’ve usually found a way to replicate roster export functions externally when it’s been lacking from the game itself, it’s proven to be a valuable tool in the games in which it has been featured. As any roster maker will tell you, the more functions you can perform in-game rather than through external manipulation, the less chance there is of something going wrong. I’d definitely like to see this become a standard feature in the roster management functions of future games. Yes, Freestyle Superstars certainly had its share of problems. The moves could be a little cheap and overpowering, not to mention easily spammed. It was, however, a very handy tool to have when the AI decided it was done playing fair and you desperately needed some baskets. It was of course primarily an endeavour to make star players stand out from the crowd and possess unique abilities, a concept that has admittedly been done better by other features in subsequent games.

Nevertheless, Freestyle Superstars did represent a real attempt at differentiating between stars and role players. This was further expanded upon in NBA Live 07 with the ability to change movesets on the fly, multiple tiers of FSS abilities and the inclusion of X-Factor players. The concept would ultimately be better handled as signature animations were introduced, as well as features such as Go To Moves and NBA 2K13’s Signature Skills, the latter being more along the lines of what Freestyle Superstars should have been. Still, Freestyle Superstars was a step forward and in that respect, I feel it’s somewhat underrated and underappreciated for what it did do well. The ability to play through a season with real life rosters has been a popular item in previous Wishlists, with NBA Live 10’s Dynamic Season actually granting that wish. Updated daily with the latest results and Dynamic DNA data, Dynamic Season allowed users to play (or replay) every game of the 2009/2010 season, influencing and changing outcomes as they saw fit and culminating in custom Playoff brackets.

With each game in the schedule utilising real lineups and DNA data, it was a pretty nifty mode for playing along with the real season while revising the outcome of games as desired. It could admittedly use a few enhancements such as the ability to clear user results and revert to real world data, not to mention online play or something else to add some depth and replay value. Still, I’d like to see it return in future NBA Live games as a compliment to Dynasty Mode. There isn’t a lot of what we saw in the demo for NBA Elite 11 that I’d suggest be kept around for a successful relaunch of the NBA Live franchise, but the approach of eliminating “dice roll” shooting is something that should be salvaged. In a nutshell, in previous NBA Live games the chances of a shot being made came down to a combination of user input (perfect release of the shoot button), presence of the defense and the player’s ratings, which ultimately determined the odds in a “dice roll”. In other words, even if your timing was perfect, you were open and the player possessed good shooting ratings, there was still a chance that the shot could miss. Needless to say, when the comeback logic was in full swing, the “dice” were loaded and not in your favour.

NBA Elite 11’s approach to shooting the ball was set to change that, placing all responsibility for the success of a shot in the user’s hands. It was a good concept, just poorly executed with a couple of glaring problems. The first was the new control method which placed shooting controls on the right analog stick, which was awkward since it was also still being used to execute dribbling moves. The second was a lack of contextually appropriate shots, which meant hook shots could be attempted – and made – from three point range. With the right control scheme, logical shot types given a player’s position on the floor and properly tuned timing windows, it’s a concept that can work and would go a long way in giving users complete control over shooting the basketball.

That wraps up my Top 5 Underrated Features in Basketball Games, but I’m interested to hear about yours. What are some of the features in basketball games that you feel don’t get enough attention or appreciation? Let me know in the comments below and as always, feel free to take the discussion to the NLSC Forum. Thanks for checking out this week’s Five, please join me for another edition next Friday.

Choops 2k8 create-a-play. This feature would be even better if you could set two custom playbooks (USER and CPU) in the same game. I create plays for specific matchups and just love the strategy of it. I play as a mid major team and my creativity with the create a play has helped me get into the NCAA tournament. Great feature.

NBA 2k13 Front end matchup settings. Having the ability to set double teams, pnr defense for the upcoming matchup, without having to pause the game right after starting it, is a great addition to 2k13.

Good picks. I haven’t played College Hoops 2K8 (I have a 360 which is of course region locked, so I can’t import games from the States), but the pre-game strategy adjustments are definitely a nifty feature in the last couple of NBA 2K games.