The Tuesday Triple: A Blacktop Wishlist 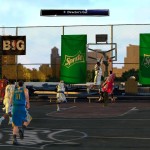 I have done two wishlists already this year, but this is The Tuesday Triple, so a third one is needed. Some may be getting a bit, sick, of me talking about my favorite mode, Blacktop. I am not going to deny that I bring it up a lot, but someone has to. So if I have the opportunity to shine some light on Blacktop in hopes that more people might give it a shot and enjoy it, or at least stop calling for its deletion in favor of more disc space, then I will probably keep featuring it. With that, let’s take a look at three realistic and reasonable wishlist items for NBA 2K15’s Blacktop mode. In the Paint – Featured MyPLAYERs

Being able to select our own MyPLAYER for Blacktop mode just doesn’t fit with the rest of the mode. On PC we are stuck with default clothes, but even on consoles having your MyPLAYER in their chosen MyCLOSET apparel seems so out of place in comparison to the NBA players. It is bad enough that we are stuck with generic faces, but the plastic, static, clothes don’t help.

So rather than put the MyPLAYER in their current MyCAREER team’s uniform, why not add more MyPLAYERs to go against? Friends’ players would be an obvious addition, but NBA 2K could have featured MyPLAYERs to select in Blacktop mode. One week it could be LD2K’s player, or Ronnie’s, or best of all Leftos’. Featuring top community members’ players would be great too, especially if this is all already on the game’s servers. Like I said though, NBA players in their official uniforms seems very out of place. A simple way to mix things up, that I have done in PC mods, is replace the NBA uniforms with practice or casual uniforms. This could be random or this could be choosable. Either way, some variation goes a long way for the mode.

While that would only change a few values to use the practice uniforms already in rosters rather than the normal home and aways, a better solution would be using all that apparel available in MyCLOSET and using it for NBA players. So have a random chooser for shorts, tops, and even hats. If The Park is anything to judge by, any combination of one team’s gear should mix just fine. The absolute best part of my Blacktop mods are the scrubs. Fully featured in the Community Ballahz mod, terribly rated scrubs that can’t dunk make fantastic fodder for NBA stars. At the same time having full games with nothing but scrubs takes advantage of NBA 2K’s gameplay by replicating some pickup game anyone could see at a local hoop.

Implementing this could be as simple as having an extra “team” of scrubs to choose from, or a button to randomly choose them. I will admit to using the filler players on the retro teams on the console version of NBA 2K14 to have some scrubs to go against, but even they are too highly rated. Who wears short shorts nowadays anyway?

So that will do it for wishlists, I think. I hope you enjoyed more Blacktop mode discussion. Plea for it to stop or continue in the comments below, or just let me know if there are any other realistic additions you can think of for Blacktop mode. Hope you enjoyed!

I’m guessing that minor fixes like the position assignments when selecting players would have to be on there somewhere.

and everything from that DFM article that was removed from the mode. At least the PS4 version doesn’t have that bug though.

i think TLC would disagree with your 3rd wish.