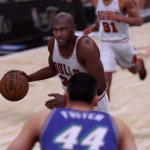 Welcome to the Sunday Substitute; the article where I get some valuable minutes while the star is resting on the bench. I might not have the time to do this every week, but I like to think I’m still making a contribution to the team.

Today I’m going to talk about 99 overall players. In real life, you may associate one or two players with the number, but it is a completely different story in NBA 2K16. In 2K PRO-AM, you will see at least one on the highly ranked teams, while in MyPARK, there are generally as many 99 players as there are players that are over 7-feet tall. However, even though the rarity of this calibre of player in real life versus online is an issue, I want to first delve into what kind of attributes make a 99 overall player.

I realise that posting my attribute levels isn’t the smartest thing to do – at least from a competitive standpoint – but I’m doing so to make a point. My player is rated 93 overall and has 3 categories that are at the highest level: Defender, Jump Shooter and Athlete. The other three categories are around mid-level, which means my player is average at rebounding, playmaking and inside shooting. You could call those areas weaknesses, but it’s kind of disingenuous, since they are merely areas that my player is around the league average in. If this is a model for a 93 rated player, could you imagine what a 99 rated player looks like? On average it tends to take two extra levels to go up one spot in the overall ratings. This means that if I wanted my player to be 99 overall, I’d need an additional 12 levels on top of the ones I already have. If I decided to stack them onto one particular area, that would be 4 areas my player would reach the maximum level, with the other two being average at worst.

The 99 rating should be reserved for transcendent, iconic players of the game. Michael Jordan and Stephen Curry are both players that achieved that rating by being the undisputed best player in the league during their respective primes. By allowing anyone with enough time to do the training drills in MyCAREER to achieve it, it cheapens the symbolism of 99 and what it’s supposed to mean. If every player on a particular 2K PRO-AM team is rated 99, none of them are special…they are basically all prototypical clones.

What’s my suggestion? I believe the overall cap should be 90 for online play. If players want to be 99 in their MyCAREER campaigns, great, they have earned it. However, I think this rating should be scaled back when it comes to MyPARK and 2K PRO-AM. How could this be done? Well, instead of allowing players that are 7’3” to have the handles and speed of a point guard, their online cap should be the league average. That way people who have decided to play with a player that more accurately represents their height in real life may actually stand a chance against them. Don’t think I’m just picking on the big men; point guards need their restrictions too. If a player is under 6-feet tall, I don’t believe they should be able to perform standing dunks. Call me crazy, but from what I’ve seen in real life, those guys generally have to play under the basket. Why not create a situation online where they have to do the same? They can stay insanely quick if they want to – I have no issue with that – but like the 7’3” centres, they can’t have it all their own way.

If NBA 2K doesn’t want to put a lower cap on online players, then maybe they can reserve the 99 status for players that have achieved a first ballot hall of fame career in MyCAREER. They could use the same VC method for people to rank up, but instead of basing the extra levels on training drills, maybe they should be based off the achievements of the player. 1 MVP trophy could unlock 1 level, a Finals MVP trophy could unlock 2 levels and so on. With that system, you would at least know that the 99 players in MyPARK and 2K PRO-AM have actually achieved something in MyCAREER, rather than just grind through each game to get to the next off day.

I understand that there would be a lot of complaints if either one of the systems I suggested were implemented. However, I believe it would make things more interesting since the higher ranked players would be less homogenous. Furthermore, it would make the truly great players and teams work to their strengths and try to find ways to limit their weaknesses. Wouldn’t that create a more fun online experience for everybody? There’s a chance I may be totally off base with my suggestions, but I believe that they would make online play in NBA 2K fairer. What do you think? Does what I say have merit or am I just a bitter old hater like Andrew?

Well, you know, saying something of merit and being a bitter old hater aren’t mutually exclusive. 😉

I do think it’s an idea worth exploring, however. It might be a tough sell because people will want to play with the player they’ve maxed out one way or another, but I do think it’s important that these modes are balanced and protected from too many exploits. I think there needs to be more of a cap on certain abilities based on position and in particular, physical attributes. We’ve seen bigs who can “handle the ball like a guard”, but they’re not that common, and there tends to be a bit of hyperbole there. If nothing else, very few bigs have demonstrated the ability to handle the ball like the best ballhandling guards, with the same kind of consistency.

Without proper balance, as you alluded to, there’s no point creating realistic player archetypes, or players without exaggerated heights. We might as well all be 7’3″ centres with maxed out abilities, and may the people with the least amount of lag win.

I’m also in favour of 99 Overall being achievable, but a really hard mark to reach. As you said, it’s traditionally been reserved for only a few players over the years. Few players reach that level of dominance or relative “perfection”, so while I think it should be possible, it should be tough to do so.

I think the “bigs that handle the ball like a guard” statement partly comes from my experiences from MyPARK as well as 2K PRO-AM. It always annoys me when I see a guy who’s over 7-feet tall that beats me off the dribble… particularly when my guy is supposed to be a max level defender. But yeah, I was probably a bit hyperbolic in that statement.

Being 99 overall should be hard to reach – potentially just as hard as getting the highest level Legendary status in MyPARK. It should definitely be reserved for the elite players.

Well, we have seen bigs who can take care of the ball a little too well in Pro-Am. It should be a little easier to poke the ball loose from most bigs, and it should be very hard to get them to a point where they can consistently dribble “like a guard”. If the games are meant to be realistic, then that’s not an unreasonable restriction to have in place, whether you’re talking about MyCAREER, MyPARK, or Pro-Am.