Posted by: Kenny in Features, NBA Playgrounds, Reviews, The Sunday Substitute May 14, 2017 8 Comments 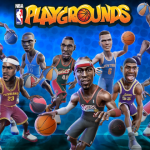 The week is in the dying minutes of the fourth quarter, which means it’s time for the Sunday Substitute! It’s the article where I get some valuable minutes while the star is resting on the bench. I might not have the time to do this every week, but I like to think I’m still making a contribution to the team. It’s been a long time on the pine for me, but today I felt like I had to share my first impressions of NBA Playgrounds.

After mistakenly releasing a beta early, NBA Playgrounds was officially released on the 9th. If you have listened to the last few NLSC Podcasts, you would know that Andrew and I were keeping close tabs on the game, as it was looking to be the spiritual successor of games like NBA Jam and NBA Street. Fast forward to now and I have played the game for several hours. I have completed all circuits, and have leveled up Bill Laimbeer, Luis Scola and Thon Maker to the Gold level. But the question remains: with all this play I have logged, what do I actually think of the game?

I must state now that I haven’t experienced the online mode in NBA Playgrounds, so my impressions are based purely on the offline content. I’m doing this initially since online experiences have tended to skew my perceptions of other video games. I don’t want to potentially give NBA Playgrounds a bad rap because of some cheese a brat online may have exploited constantly. Ultimately, the game itself is the most important thing…at least for my initial impressions. With that out of the way, let me discuss what I have liked and haven’t liked about the game so far. Now, as a MyTEAM nerd, I must talk about the card packs, as it is the first thing you encounter in the game. The odds of picking up better players seems to be much higher than NBA 2K, and it stands to reason. In comparison to 2K and Live, it should be expected that pack odds would be better in NBA Playgrounds. There are less players, which in theory also means that each team has only their best players on the roster. Furthermore, packs in NBA Playgrounds only have players in them, so it’s more likely that you will get better players sooner. Yet, even with the probability on my side, my history with 2K packs still made me sceptical.

“Great,” I thought. “I bet Jakob Pöltl is going to be my new Jarnell Stokes.”

However, much to my surprise, each pack I opened has had at least two or three players I was happy to pick up…and even more surprisingly, no Jakob Pöltl yet. Another intuitive feature in the NBA Playgrounds card collecting system is what happens when you get a repeated player. Since NBA Playgrounds doesn’t have an auction house, picking up a repeated card adds XP to the card you already have in your collection. I find that to be refreshing because the duplicate card works to your advantage, instead of being an inconvenience.

As far as gameplay is concerned, I believe the most intuitive feature is the fatigue system. Similar to NBA 2K17, NBA Playgrounds has a dribble fatigue system when it comes to doing crossover moves. However, the part of the fatigue system I love is the steal fatigue. By draining energy every time a player presses the steal or push button, NBA Playgrounds makes the user pick their spots when it comes to stealing the ball. While steal fatigue also exists in NBA 2K17 to some extent, it feels far more meaningful in NBA Playgrounds. If you’re constantly swiping at the ball in NBA Playgrounds, you’re not going to have the energy to do much else. Perhaps this is something 2K can take on board in a more significant way. Unfortunately, there are a multitude of gameplay issues straight off the bat. I’m not going to list every issue – particularly since Andrew summed them up well in this thread – but just the ones that particularly got on my nerves during my initial hours playing the game.

One feature I really don’t like in NBA Playgrounds is the layup mechanics. If I made an NBA video game, and I had to implement a feature “inspired” by NBA 2K, timed layups would probably be on the bottom of my list. Unfortunately, this wasn’t the case for Saber Interactive. In fact, the timed layups in NBA Playgrounds are actually much worse, because I have found it unnecessarily hard to even make an open layup in the game. A part of this problem is that I have no idea where I’ve been going wrong, because the shot meter isn’t particularly noticeable.

For a game that is more likely to attract non-basketball gamers, this is a terrible feature. It could potentially alienate a chunk of the market that ultimately separates a game like NBA Playgrounds from NBA 2K. It might just be something that I have to get used to, but at this point, I’m more so hoping that this is something that is patched. Because right now, it seems so hard to complete one of the easiest shots in basketball.

Another gameplay issue that has annoyed me is the inbounding. For a reason unbeknownst to me, there seems to be a delay before inbounding the ball after a score…and it is counter-intuitive to what the game is supposed to be about. With the shorter shot clocks and fast-paced games, NBA Playgrounds is supposed to be going for an up-tempo style. So why do they insist on completely killing the momentum of the game with these inbounds plays? It’s quite baffling.

Finally, I want to talk about perfect shots. It is a feature that gives the team an extra point if they get the NBA Playgrounds equivalent of a perfect release. It’s not a bad idea…in theory. However, my main issue with it is when it is utilised by the CPU. When the AI players start getting the extra point, it feels cheap. And in those vital moments, where the game could go either way, it really can be a game breaker. It’s certainly a tough pill to swallow for someone who believes that points count for the same, no matter how you get them. NBA Playgrounds isn’t perfect. As it stands, I have a love-hate relationship with the game, as the issues it has now make it a tougher game to get into than previous arcade titles. With that in mind, it currently falls short as a spiritual successor to the likes of NBA Jam and NBA Street. However, I still I believe Saber Interactive have a good foundation here to continually develop the arcade basketball game that die-hard fans have been waiting for. While it’s still numerous gameplay tweaks away from living up to that expectation, I’m willing to give NBA Playgrounds the benefit of the doubt and take a wait-and-see approach. After all, a good arcade basketball game is worth waiting for.

I’m slowly warming up to the game a little more, though the key issues we’ve both covered remain an issue for the moment. Spot on about the layups, I’m not sure why they’ve made them so difficult. It’s one of the things that’ll hopefully be tweaked moving forward.

The card packs definitely feel fairer. Like you said, the smaller roster comprised mostly of standout players certainly helps, but I haven’t come across too many doubles yet. The 100 XP bonus for a double card is a good idea, too.

It took me a while as well. There are definitely parts of the game I still find infuriating, but I’m still fairly new to it. I think being relatively difficult makes it rather jarring, as it is presumed to be a more casual experience than 2K or Live. So yeah, not sure I totally agree with that decision.

I’m sure we’ll analyse it more on this week’s Podcast, but it kind of feels like they went in a few directions with it, and some of the choices aren’t entirely compatible. The good news is, some of it can probably be tweaked and tuned, so patches could really end up enhancing the game.

Thank you for quick impressions, Kenny! 🙂 I have not an attend to buy the game, especially when my X1 runs NBA Jam: OFE well, but I like to see its operative coverage (as well as in the podcast).

A little jealous of that. I hope OFE comes to PS4 at some point!

Glad you appreciate the article. I might post more further down the line, as I have a slightly more informed opinion. But at this point, I just wanted to post a detailed reaction as a means of initial feedback.

And I would also love to see NBA Jam on PS4. Hopefully it is something that happens.

How do I play offline. Do I have to have PlayStation plus and the internet cnncected